According to the National Alliance on Mental Illness, psychosis refers to an episode in which an individual has a break from reality. This often includes but doesn’t require delusions, or false beliefs that are firmly held despite clear evidence to the contrary, and hallucinations. About 3 in every 100 people will experience at least one episode of psychosis in their lifetimes.

Drug-induced psychosis, also known as substance-induced psychotic disorder, is simply any psychotic episode that is related to the abuse of an intoxicant. This can occur from taking too much of a certain drug, having an adverse reaction after mixing substances, during withdrawal from a drug, or if the individual has underlying mental health issues. Though it’s not actually true that taking a certain kind of drug can suddenly trigger a severe mental illness where none had existed, mental illness is a predictor of substance abuse, and someone prone to psychosis can be triggered by becoming overly intoxicated.

Substance abuse is defined as any use of an illicit intoxicant, any use of prescription medication outside the direction of a doctor, or excessive use of legal substances such as alcohol. According to the Substance Abuse and Mental Health Services Administration’s (SAMHSA’s) National Survey on Drug Use and Health, 9.3 percent of individuals in the US age 12 over older needed treatment for a drug or alcohol problem in 2009. This does not include people who occasionally abuse drugs but are not considered to have a dependency issue. This amounts to 23.5 million people.

Psychosis can be caused by the abuse of hallucinogens or certain prescription medications. In rare cases, exceptionally sensitive people can experience psychosis as a side effect even when taking prescription drugs properly.

Any time psychotic symptoms appear when taking prescription medications, the individual or a loved one should contact a doctor immediately. It may be necessary to immediately stop taking the medication altogether. Psychosis can also become more likely when these medications are abused.

When it comes to nonprescription intoxicants, the likelihood of psychotic symptoms appearing, and what that looks like, varies from substance to substance. For example, taking a large amount of cocaine all at once can cause psychosis in minutes. Psychosis from cocaine or amphetamine use typically produces persecutory delusions.

Hallucinogens can, of course, cause visual, auditory, and tactile hallucinations, but this is not the same as psychosis. However, an adverse reaction or taking too much of this kind of drug can also cause delusions and paranoia.

This can happen with the use of hallucinogens such as LSD and psychotropic mushrooms, but psychosis can also occur with abuse of cannabis, especially when too large a dose has been taken.

Alcohol abuse can cause psychosis, but typically only after days or weeks of intense use. People who have a chronic alcohol abuse problem that has lasted for several years are also vulnerable to intense paranoia and hallucinations. This occurs due to the damaging effects of alcohol on the brain over time and due to a lack of thiamine (a vitamin B complex) in the body that can lead to Wernicke-Korsakoff syndrome.

Substance abuse does not always lead to physical addiction, but it does increase the risk of developing this problem. The longer and more intense the abuse, the greater the risk. Physical addiction is characterized by the emergence of withdrawal symptoms when the individual stops taking the intoxicant in question. Depending on the type of substance abused, the length of time the abuse has gone on, and how much is typically taken at once, withdrawal can include psychosis.

The most commonly known substance-induced psychosis from withdrawal involves alcohol. Long-term alcohol addiction can significantly change the chemistry and even the structure of the brain, possibly producing a set of symptoms referred to as delirium tremens when the addicted individual stops consumption.

Delirium tremens is considered to be a medical emergency. The psychotic symptoms can be severe and require sedation, while the seizures can be directly life-threatening.

Psychosis can also appear during withdrawal in any individual who has suffered from a long-term addiction to many substances that significantly affect brain chemistry. This includes many amphetamines, opiates, and inhalants. These symptoms can last for hours or days, and it’s likely that the individual will need to be sedated or at least closely monitored during this period. When it comes to methamphetamine, psychosis can actually spontaneously reappear in people who have been clean of the drug for many years.

There are a number of mental illnesses that can include psychotic episodes as a symptom. Schizophrenia is often the first illness that comes to mind when people think of psychosis, however, not every type of schizophrenia includes psychotic symptoms. Paranoid schizophrenia is characterized by both hallucinations and delusions, though how disruptive this depends on how severe the condition is. People with bipolar disorder can also experience psychosis. This typically occurs during severe manic periods. Psychosis can also appear in people with major depressive disorder, which can result in a diagnosis of psychotic depression. Unfortunately, this disorder has a high mortality rate due to the intense suffering combined with psychotic episodes. Other disorders that have psychosis as a symptom include delusional disorder and schizoaffective disorder. Plus, it can present in degenerative brain diseases like Parkinson’s disease, Huntington’s disease, and dementia.

Brain tumors, cysts, or untreated HIV or syphilis can also cause psychosis. When an individual has a mental illness that already has the potential to include psychosis, drug abuse can more easily lead to this symptom. It can be tricky to determine whether the drug abuse triggered the psychosis or whether the early effects of psychosis led to drug abuse. At the same time, certain substances can interact with antipsychotic medications, causing them to become less effective or ineffective, triggering a psychotic episode.

Another difficulty is the spiraling nature of drug abuse that triggers psychosis. Due to the fact that psychosis is such a disruptive event that can cause so many problems, individuals dealing with one of these mental illnesses may turn right back to substance abuse to cope.

This is a common problem when people are suffering from severe mental illnesses that are more difficult to treat than standard mood disorders. Plus, especially in people with schizophrenia and major depressive disorder, self-care can be incredibly difficult.

With bipolar disorder, manic episodes come with reduced impulse control. This can result in excessive consumption of drugs or alcohol. Consumption of stimulants make the mania worse, and that spiral can eventually result in psychosis. On the other side of the spectrum, bipolar patients in a depressive state may turn to alcohol or stimulants to self-medicate.

Find Co-Occurring Disorder Treatment Near Me

Psychosis is merely a symptom, not a condition in and of itself. It is typically very temporary, resolving in a couple of hours or days at most. However, it’s a very serious symptom that often requires emergency medical intervention. One in five people with a history of psychosis will attempt to kill themselves. 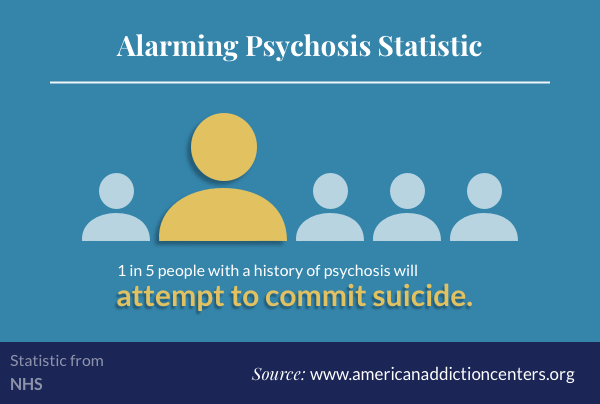 In the case of substance-induced psychosis, the obvious cure is to stop abusing any substance; however, the reality is often more complicated. Addiction can make it difficult to stop, and withdrawal symptoms are virtually unavoidable after long-term substance abuse. Mental illness symptoms can become unbearable to the point that afflicted individuals self-medicate, or a loss of impulse control can blow any resolve to abstain.

The answer to substance-induced psychosis is an effective treatment. There are plenty of options for drug and alcohol addiction treatment. Medically supervised detox can easily prevent the more severe symptom of psychosis through the use of common medications or by tapering off the substance rather than quitting cold turkey. Once the initial detoxification is completed, psychosis should not be an issue. However, relapse and the subsequent necessity for another detox can increase the chances that psychosis will appear as a symptom during withdrawal. Because of this, it’s important to follow detox with a complete rehabilitation program. This can be set at an inpatient facility or be an outpatient program; both types of care should involve therapy and/or support group meetings to learn the skills necessary to live a clean life. After several weeks of that, continuing to attend support group meetings or group therapy significantly reduces the chance of relapse.

In the case of pre-existing mental illness, proper treatment is essential to ensure that the afflicted individual does not feel the need to self-medicate. Thankfully, there are many possible medications to try for those living with depressive disorders and bipolar disorder. Mood stabilizers like lithium can prevent the intense manic states that can lead to psychosis. New antidepressants are being developed that are not intoxicating or addictive, and it’s often just a matter of finding the right medication for the individual to make major depressive disorder manageable.

It’s very often beneficial for people with mood disorders like these to attend Cognitive Behavioral Therapy (CBT) or a similar form of therapy. The goal of CBT is to train clients toward more adaptive thought patterns, teach them new behavioral skills that can strengthen impulse control, and help them find healthier ways to cope when things get tough. For those with more severe mental illnesses that have psychosis as a common symptom, there are a number of antipsychotic medications that can be used, and these individuals are often also put on antidepressant or anti-anxiety medication. Just like with the other disorders, it often takes some time to find the right drug or combination of drugs to make symptoms manageable.

For people with schizophrenia, group therapy with others dealing with schizophrenia is often more beneficial than individual therapy due to the support they can find in those who can truly empathize with them.

This can help them stay on track with taking their medications, which is very important due to the fact that only about 25 percent of people with chronic medical conditions report full adherence to their drug treatment during a 12-month period. Family therapy can also be essential as high stress can trigger psychotic episodes and the urge to self-medicate.

In spite of common stereotypes, people with schizophrenia can live normal lives. With medication, they might still have occasional minor hallucinations, but they are able to recognize that they’re not real, avoiding psychosis.