Everyone will experience the sensation of anxiety or fear at one time or another.

Both the sensations of anxiety and fear are adaptive responses that are designed to warn the person of an impending threat and to prepare them to deal with such a threat by either confronting it (fight) or escaping from it (flight). Psychologists and psychiatrists that study anxiety have described three major components to the experience of anxiety:

Anxiety is often associated with an impulse to engage in flight or escape as opposed to direct confrontation. In clinical terms, when a person’s relationship with anxiety becomes dysfunctional, they may be diagnosed with an anxiety disorder.

What Is an Anxiety Disorder?

It is important to understand that experiencing dysfunctional levels of anxiety and/or depression is common in nearly every different type of psychological disorder listed by the American Psychiatric Association.

An anxiety disorder is diagnosed when the primary manifestation of the individual’s dysfunctional behavior is related to anxiety and when:

Panic disorder is an anxiety disorder that is diagnosed when an individual experiences repeated panic attacks and then exhibits certain behavioral responses to the anticipation of experiencing further panic attacks. Recall the three components of anxiety mentioned above. For someone to have a disorder with anxiety, the person will typically manifest dysfunctional behavior related to all three components of anxiety.

Panic disorder can only be diagnosed in an individual who exhibits certain responses to having panic attacks that are considered to be out of proportion to the actual danger associated with them and/or inappropriate for the individual’s age (e.g., expectations regarding young children and responses to anxiety are much different than they are for adults). Thus, while the core symptom of panic disorder is recurrent panic attacks, the individual must also demonstrate a certain set of responses to these attacks in order to be formally diagnosed with panic disorder.

Many individuals who experience repeated panic attacks or even first-time panic attacks may think they are having a heart attack or other life-threatening condition. Panic attacks often occur without any real provocation; however, they may also occur in response to some specific situation that is anxiety-provoking to an individual. In order for someone to be diagnosed with panic disorder, in addition to having recurrent panic attacks, they must also display at least one of the following behaviors:

For example, someone who has a panic attack at work and then stops going to work or working altogether because they fear they may experience more panic attacks at work would likely be displaying the behaviors associated with panic disorder.

There are no current identified specific causes of panic disorder; however, it is generally considered that a combination of genetic and environmental factors interact to produce the disorder. In addition, individuals who have thyroid, cardiovascular, or other medical issues will often experience extreme anxiety attacks that are diagnosed as panic attacks.

Individuals who experience panic attacks should have a full physical workup in order to rule out purely physiological causes of these experiences with intense anxiety. In cases where a cardiovascular or thyroid condition is creating the sensation of severe anxiety, a diagnosis of panic disorder would not appropriate as specified above (e.g. the panic attacks or the anxiety associated with anxiety disorders cannot be better explained by the presence of a medical condition). In these cases, addressing the physiological problem often results in the cessation of anxiety. 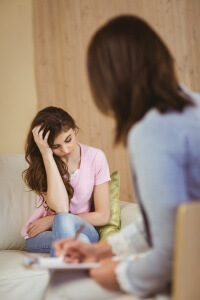 The American Psychiatric Association and other organizations aimed at identifying and treating mental health issues, such as the National Institute of Mental Health and the National Institute of Drug Abuse, consistently report a very high association between the diagnosis of any mental health disorder and a propensity to engage in substance abuse. While there are a number of different possible explanations for this high association, no single explanation has ever been demonstrated to be a valid description of a mental health disorder causing one to develop a substance use disorder (e.g., such as self-medicating) or a substance use disorder leading to the development of other psychological disorders.

Typically, individuals with anxiety disorders will abuse substances, such as alcohol, central nervous system depressants, tobacco, marijuana, and even stimulants.

There are a number of different approaches to treating panic disorder. In addition, there are also a number of self-help and alternative treatments that are touted as effective in the treatment of panic disorder. While some of these alternative approaches may be effective in addressing issues with normal anxiety, there is often no or very weak research support that claims these approaches are effective in treating anxiety disorders such as panic disorder. The difference between the experience of normal anxiety and an anxiety disorder can be visualized as trying to compare a typical individual out for a Sunday afternoon walk to the speed of an Olympic gold medal sprinter. The intensity of the two experiences is quite different, and both issues require different approaches to address them.

The psychotherapy approach of choice for panic disorder is a form of Cognitive Behavioral Therapy (CBT) that includes relaxation training, exposure techniques (individuals are trained to deal with severe anxiety via relaxation and stress control, and then exposed to situations that recreate the onset of their panic attacks, allowing them to control the anxiety), cognitive restructuring (identifying certain dysfunctional thoughts in individuals with panic disorder, and then addressing and changing these thoughts), and psychoeducation regarding the specifics of the individual’s disorder.

Treatment for panic disorder and a co-occurring substance use disorder also includes substance use disorder treatment as a component of the overall treatment plan. Typically, when co-occurring disorders are treated, the therapeutic approach is described as an integrated approach that combines several different types of therapists and physicians in a multidisciplinary approach. Both disorders are treated concurrently and also given the specific separate attention they need to be effectively addressed.