Authored by Editorial Staff
Last Updated: September 29, 2021
Why call us?

Editorial Staff
The editorial staff of American Addiction Centers is made up of credentialed clinical reviewers with hands-on experience in or expert knowledge of addiction treatment.
Related Topics
Related Tags
meth
withdrawal
Crystal meth, also known as methamphetamine, is a very powerful man-made stimulant drug that has become increasingly popular with drug abusers.

This drug can be made with very simple ingredients that can be purchased at drug stores, though it is becoming increasingly available through larger foreign manufacturing sources.

Methamphetamine presents as small bluish and whitish rocks or as small pieces of glass, and is highly addictive. It is known by a number of street names including glass, ice, crank, shards, etc. The drug is typically snorted or smoked.

Symptoms of meth withdrawal may include:

A significant number of individuals report feelings of depression, which were also noted to decline in a linear fashion over the course of the withdrawal time period. These depressive symptoms can be significant and associated with thoughts of suicide. In addition, research has indicated that a good number of individuals who relapse do so because of feelings of depression, apathy, hopelessness, etc.

A large meta-analysis indicated that the most dangerous symptoms associated with methamphetamine withdrawal are severe depression and the potential to develop psychosis. It did not reveal any significant overall risk for the development of other health issues, although in individual cases, there may be health risks associated with withdrawal from methamphetamine. These risks may be more salient in older individuals or individuals with pre-existing medical conditions.

There is also some research to indicate that at least following short-term recovery, individuals with methamphetamine use disorders exhibit some cognitive deficits in the areas of mental processing speed, attention, memory, and planning that are not fully resolved within six months of abstinence. Research looking at the longer-term cognitive effects of crystal meth abuse is ongoing.

There are numerous studies that have documented the effects of withdrawal in chronic methamphetamine abusers. Despite quite a bit of misinformation online, it appears that the timeline for methamphetamine withdrawal is relatively consistent and offers some predictability regarding what clinicians and those in recovery can expect.

Withdrawal symptoms are primarily psychological and emotional with several associated physical symptoms. The withdrawal process from methamphetamine does not appear to be consistently severe, such as with withdrawal from alcohol or opioid drugs.

Withdrawal from crystal meth is most likely not potentially physically damaging unless the individual becomes extremely emotionally unstable and engages in self-harm.

Methamphetamine has a relatively short half-life (an average around 10 hours), and it is a fast-acting drug. In general, according to research, it appears that the timeline for withdrawal from crystal meth is fairly consistent among users: 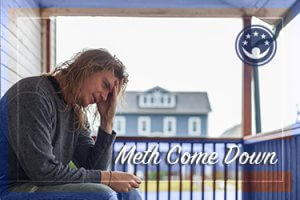 Methamphetamine is a potent stimulant, whether it comes as crystal meth, speed, or another form of amphetamine. The drug quickly hits the brain, releasing neurotransmitters like dopamine and serotonin to increase energy, alertness, and sociability.

Meth’s effects may last for up to eight hours, depending on the dose, but once the drug starts to wear off, the comedown effects can cause the individual to feel terrible.

A comedown is different from withdrawal, although there are a few aspects of the process that appear similar. Comedowns from drugs are closer to hangovers from alcohol, as both are caused by a combination of neurotransmitter imbalances in the brain, chemicals metabolized into toxins that build up in the body, and exhaustion from the euphoria of the drug.

Comedown symptoms may last for a few days after one abuses the drug, especially mental health changes like depression and anxiety. When abused as a party drug, meth may be mixed with other amphetamines, opioids, or alcohol. Mixing drugs together is very dangerous and can cause an overdose; in addition, comedown symptoms will feel worse or more intense when substances are combined. If the individual does not take any more meth, these symptoms will resolve on their own.

Comedowns Can Lead to Binges

It is important to understand the symptoms of a comedown from stimulant drugs like meth because many people who begin to abuse these drugs take more as the comedown symptoms begin to set in. This leads to binges, which can cause a deadly overdose or long-term harm to the brain and body. 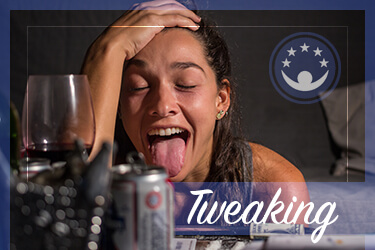 Tweaking occurs when a person struggling with meth abuse does not sleep for 3-15 days, suffers from intense paranoia, and likely develops temporary psychosis. The original euphoria from meth does not occur after a few doses, but the person still struggles with high energy, overheating, dehydration, loss of appetite, physical pain and twinges, anxiety, irritability, and aggression.

At a minimum, the person develops repetitive behaviors, like taking objects apart and putting them back together or obsessively cleaning. Without enough sleep, the person may experience hallucinations or delusions, leading to psychotic behavior. Formication – hallucinating bugs on or under the skin – causes people suffering from a meth binge to repeatedly scratch or pick at their skin, which can damage this organ and lead to infection. Users may lash out, harming themselves or others in the process.

Coming down, or crashing, after a binge, can lead to complete mental and physical exhaustion. A person may experience malnutrition from failing to eat and is likely to sleep for several days. Mental health side effects can feel very serious, and unfortunately, this intense depression can lead to the individual taking more meth when they wake up.

There are no medications approved by the FDA that are specifically designed to be used in the detox withdrawal process from crystal meth. However, there are several different medications that can help to manage some of the symptoms that occur during this process of withdrawal:

In the management of the withdrawal process from crystal meth, physicians are free to use any medications to address any specific symptoms that occur in individuals. For instance, in individuals who develop psychotic-type behaviors, such as paranoia, delusions, and/or hallucinations, physicians are free to administer antipsychotic medications to these individuals if the symptoms are judged to be severe enough to require direct treatment.

Physicians may also attempt to directly manage depressive symptoms through the use of antidepressants; however, because most antidepressants do not begin to exert their effects until 2-4 weeks after initial administration, this may not be an effective means of coping with depression in the withdrawal process. Other medications can be used to address specific symptoms that occur during withdrawal from methamphetamine.
[/callout]

Editorial Staff
The editorial staff of American Addiction Centers is made up of credentialed clinical reviewers with hands-on experience in or expert knowledge of addiction treatment.
Related Topics
Related Tags
meth
withdrawal
Don’t wait. Call us now.
Our admissions navigators are available to help 24/7 to discuss treatment.
Why call us?