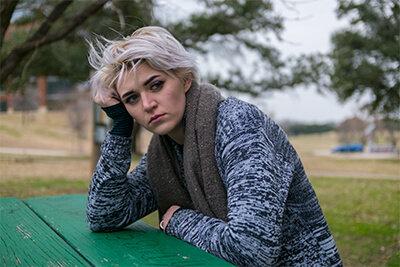 Oxycodone is a prescription opioid that is commonly used to treat pain in the moderate to severe range. Usually found in tablets or capsules, Oxycodone belongs to a class of drugs known as opiate analgesics. According to the Drug Enforcement Administration (DEA), Oxycodone has been classified as a Schedule II drug since 1970. It is often abused through one of three methods: orally, through the nose via snorting, or injecting intravenously after dissolution.

Oxycodone prescriptions are common, which has resulted in many cases of addiction and the illegal distribution of the substance. Health problems, addiction, and overdose relating to opioids such as Oxycodone have been one the rise in the US for more than a decade, coinciding with the increased number of prescriptions for these kinds of drugs.

There are many side effects associated with Oxycodone use in the short-term. According to Medline Plus, users may experience the following symptoms:

These are some of the less severe side effects that users can experience even if they are not abusing the drug. If they persist or worsen, it is recommended that a patient alert their doctor to the symptoms. Open communication with a physician is extremely important when dealing with a strong opioid like oxycodone.

There are more serious side effects of oxycodone use as well. They can arise from recommended use of the drug, but it’s more likely to see such symptoms in cases of abuse. Use can affect an individual’s heartbeat, something that can be very dangerous and should be addressed immediately. Nausea and vomiting may also arise and can be accompanied by a loss of appetite and increased physical weakness.

Men may experience trouble achieving an erection, which obviously would have a significant impact on one’s sex life. Women could see their menstruation become irregular as a result of oxycodone use. Overall, people could see a decrease in their sexual desire in general.

Skin conditions may develop from oxycodone use. A rash or hives may become an issue, often accompanied by significant itching and discomfort. A person’s face may also see noticeable swelling, as can some of their extremities, such as the hands and feet.

An individual may also experience problems breathing and swallowing, which can be especially alarming due to respiratory dangers associated with the drug. Chest pains and lightheadedness are additional concerning symptoms that may arise. In some extreme cases, a person may even have a seizure.

The Food and Drug Administration (FDA) recommends that people steer clear of oxycodone if they have certain existing conditions. These include lung problems, such as severe asthma or regular breathing trouble. People with bowel issues are also dissuaded from consuming the drug, as constipation is a common problem experience by those on oxycodone and other opioid analgesics.

Long-term use of oxycodone can result in the development of physical dependence on the drug. The level of physical addiction can be extreme, as is the case with most opioids. Oxycodone has been known to be very addictive, and even proper use can lead to abuse, according to the FDA.

In cases of abuse, oxycodone becomes an extremely dangerous drug that can lead to overdose. Overdose occurs when too much of the drug is consumed, usually involving a long-acting or extended-release form of the substance. Each of the following symptoms could be a sign that oxycodone overdose has occurred:

If an overdose is suspected, it is important to call 911 and relay as much information about the situation as possible. Medical professionals arriving on the scene as quickly as possible gives the overdosed individual a much better chance of survival, as overdose can lead to coma and death.

Constipation is another potential side effect of long-term oxycodone use. Opioid-induced constipation (OIC) is the most common side effect of prolonged opioid use, according to an article published in Therapeutic Advances in Chronic Disease. Constipation occurs when an individual has fewer than three bowel movements in a single week. The bowel movements are often hard and dry, which makes them painful to pass and can have a drastic effect on a person’s quality of life.

Those struggling with OIC can attempt to remedy this condition on their own using techniques like:

However, in more extreme cases of OIC, a doctor may prescribe a medication to assist an individual. Laxatives are used to increase the amount of water in a person’s system, which can help soften the stool and allow for easier passage. Cathartics have also been known to help soften stool, and certain varieties can assist in pushing stool through the system. Other medications may change the way the intestines absorb water and even block the effects opioids are having on the bowel. Rectal approaches are also considered for cases in which oral medications have proven to be ineffective.

Opioids such as oxycodone have been used in an attempt to treat chronic headaches, such as migraines, but there has been little evidence that this is an effective way to treat such issues. In fact, an article published in Cephalalgia found that many individuals who consume large amounts of opioid analgesics experience chronic headaches. This study found that opioids in particular appear to be problematic relating to headaches in the long-term. While they may mitigate headache pain for some individuals in the short-term, the pain may actually become exacerbated in the long run.

Due to the legality and effectiveness of prescription drugs, it’s often difficult to convey the dangers associated with them to the public. NIDA stresses that education on the subject is crucial in preventing abuse of and addiction to substances like oxycodone. Prevention is obviously preferential to treatment, as it helps a person avoid the struggles of drug abuse and potentially addiction in the first place.

In many cases, prevention is not enough though, and abuse of a drug as strong as oxycodone can lead an individual down the path to addiction quite rapidly. According to the American Society of Addiction Medicine (ASAM), approximately 2 million people had some kind of substance use disorder related to prescription painkillers in 2015. Comparing this figure to the fewer than 600,000 people battling a substance use disorder related to heroin the same year shows just how prevalent and problematic prescription drug abuse has become in the United States.

Those dealing with oxycodone addiction should seek help via professional treatment. According to NIDA, the integration of drug treatment into healthcare settings is becoming more common. Medication-assisted treatment to ween an abuser off physical dependence on a substance will make the withdrawal process less painful and uncomfortable. However, addressing the physical addiction alone is not enough to give an individual a good chance of a successful recovery.

Behavioral intervention and treatment is usually required for a person to experience long-term recovery. Habits and rituals associated with past substance abuse make it easy for an addicted individual to experience relapse, which can lead to a person falling back into full-blown addiction very easily.

Education about the risks associated with drug abuse can be extremely helpful as well, especially in the case of intravenous use. Those in recovery can benefit greatly from information about the dangers of sharing needles. Infectious diseases and blood-borne viruses like HIV are very real risks associated with this type of abuse, and knowledge about these issues can serve as a significant deterrent regarding the temptation of relapse.

NIDA stresses that 20 years of research suggests that treatment for opioid addiction use all of the strategies mentioned above, and that this integrated approach will prove more effective than any of the individual components on their own. Organizations like NIDA continue to research the most effective ways to recover from addictive substances such as opioid analgesics, and new treatments are continually on the horizon.

Avoiding the Side Effects of Oxycodone

It’s clear that oxycodone and other prescription opioids have significant dangers associated with them. As highly addictive substances, the potential for a user to experience abuse issues is rampant. However, a drug like oxycodone can be very effective when used properly. This includes administering the proper dosage and reporting any significant or concerning side effects to a doctor.

When dealing with a drug that can lead to overdose and death, taking all the proper precautions is necessary. Information sharing with a doctor can be crucial in the prevention of addiction, adverse side effects, and long-term health problems down the road.