Spice Overdose and Side Effects

Wherever one finds a discussion about Spice online, the word dangerous is never too far away. Spice is one of many street names for synthetic cannabis.

Spice is not naturally made marijuana, which is why it is also called “fake weed” or “synthetic marijuana.”

Manufacturers of Spice (mainly in Asia, but also in the US) make their phony products look like organic marijuana. These illicit manufacturers create different chemicals in a lab and then spray them on plant matter to make them look like marijuana. Spice makers abroad must get their products through US customs and into shops. To do so, they most often put the fake weed in foil packaging and label it as “incense” or “potpourri.” To avoid detection, they usually write “Not for Human Consumption” on the packaging. Spice is also sold as a liquid that can be smoked in an e-cigarette or vaporized. 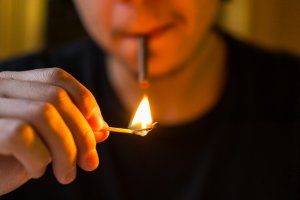 John Huffman, a Harvard University educated chemist, is the father of the chemical formula for synthetic THC. At some point in the early 1990s, Huffman received funding to study cannabinoids. It was difficult to get approval to use real marijuana, since it is a federal controlled substance. As a workaround, Huffman created a compound he called JWH-018, a synthetic cannabinoid. It appears that the most Huffman and his team did with this compound was create an experiment, test it on laboratory mice, and write a report. However, the formula surfaced a few years later as an alternative to real marijuana.

The JWH-018 compound was being used to help people get a marijuana-like high without testing positive on a drug test for naturally occurring THC. More recently, synthetic marijuana emerged in the incense-like and liquid format, available at gas stations and convenience stores.

Individuals who use synthetic marijuana have absolutely no way of knowing what chemicals are included in the formula. Unfortunately, it’s the same for US customs, the Drug Enforcement Agency (DEA), the US Food and Drug Administration (FDA), and law enforcement. The makers of the chemicals that go into Spice have been able to stay a step ahead of consumers and public health and safety agencies. For instance, by March 2011, authorities had information about five chemical compounds that were being used in Spice and made them illegal (JWH-018, JWH-073, JWH-200, cannabicyclohexanol, and CP-47,497). But there are various harmful and even deadly chemicals entering the market under the guise of being incense or potpourri.

There are stories about the side effects of Spice use throughout the nation. But let’s be clear: The street names Spice, fake weed, and synthetic marijuana are all misnomers because these drugs may not even contain synthetic THC. It would be more accurate to call them toxicants and poisons of unknown origin.

The Foundation for a Drug-Free World discusses the long-term effects of Spice abuse. The chemical ingredients of Spice are likely to be psychoactive, which in turn likely makes them addictive. An article published on The Fix discusses the signs of Spice addiction, which can include the following:

It can also be helpful to review the clinical criteria involved in diagnosing a substance use disorder. Mental health clinicians rely on the Diagnostic and Statistical Manual of Mental Disorders (DSM-5) to diagnose all recognized substance use disorders. Per the DSM-5, there are a total of 11 diagnostic criteria. A person must have at least two of the 11 criteria for a period of 12 months to receive a diagnosis. The greater the number of criteria present, the greater the severity grading (e.g., mild, moderate, or severe). The 11 criteria cover the physical, psychological, and behavioral aspects of addiction.

There are some known long-term medical complications, including kidney problems (known cases in Wyoming), paralysis, confusion, and forgetfulness. One potential complication for treatment providers is that Spice-related conditions have a unique and possibly heretofore unseen pathology. Spice abuse truly introduces new toxicants into the body, and the full extent of their harm is unknown. At best, doctors will be able to treat the side effects and, in some cases, reverse the damage done.

Find Addiction Treatment Facilities Near You

A group overdose story, which The New York Times covered in July 2016, drives home how consuming synthetic chemicals is nothing short of playing a game of Russian roulette. As the Times reported, 33 locals of Bushwick, Brooklyn, mostly homeless, were sent to the emergency room due to a K2 overdose. Locally, synthetic weed is mainly known as K2. Residents reported that they are used to seeing some of the local homeless high on drugs, especially K2, but that day some people were exhibiting symptoms that needed immediate medical attention.

Residents described the affected people as looking zombie-like, having respiratory problems, and being mentally out of it. Some affected people were paralyzed, staggering, or passed out. One man was even slumped over a fire hydrant. In 2015, New York banned the sale of these synthetic drugs. In May 2015, visits to New York emergency rooms for synthetic marijuana use was down by 85 percent, which is thought to be due to the ban. However, the July 2016 incident in Brooklyn shows that the ban is not 100 percent effective.

Acute poisoning can strike at any time, depending on the chemical ingredients in the given batch. As the case examples reflect, sometimes dangerous side effects are immediate, and other times, they take longer to reach the point where medical intervention is necessary. The hope is that the more people understand that they are at risk, the less likely they will be to start using, or continue using, synthetic marijuana.

Editorial Staff
Author
The editorial staff of American Addiction Centers is made up of credentialed clinical reviewers with hands-on experience in or expert knowledge of ad … Read More
Read Our Editorial Policy
Related Topics
Related Tags
overdose
synthetic
Are you covered for addiction treatment? Find your insurance.
Check My Insurance
Do you have insurance?
Don’t wait. Call us now.
Our admissions navigators are available to help 24/7 to discuss treatment.
Get addiction help now (24/7 helpline)We’re here for you every step of the way.