Major depressive disorder (MDD), also known as depression or clinical depression, is a serious mental health disorder that can drastically affect a person’s daily life. For example, it can result in problems sleeping, eating, and working. MDD can be incredibly debilitating when left untreated.1

Depression is among the most commonly experienced mental health disorders in the U.S. A person can experience depression at any point in life, thought onset often occurs in adulthood.1

Research indicates that depression is likely caused by a combination of factors. According to the National Institute of Mental Health, genetic, environmental, biological, and psychological factors all have the potential to contribute to the development of MDD.1

While it is not possible to predict exactly who will be impacted by depression, certain risk factors for MDD do exist. Factors may include:1,2 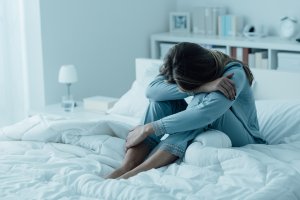 Symptoms of depression include:3

A clinical diagnosis of major depressive disorder requires that the individual experiences at least 5 of these symptoms in a 2-week period (with at least one of the symptoms being reduced pleasure/interest or depressed mood).3 With the exception of thoughts of death; suicidal ideations, plan, or attempt; or weight changes, a symptom must be present nearly every day to be counted. major depressive disorder symptoms must be a change from prior functioning and cannot be due to another medical or mental health condition or caused by a substance. They must also cause significant distress or impair functioning and cannot be an appropriate response to a significant loss.

Depression is the leading cause of disability for individuals aged 15–44 in the United States.4 Based on 2017 surveys, it was estimated that more than 17 million adults experienced at least one major depressive episode in the past year in the U.S. alone.5 According to the American Psychiatric Association, one in 6 individuals will experience depression at some point in the lives.6

Children and teenagers also tend to experience certain symptoms of depression. In a younger child, depression can present itself with symptoms such as clinging to a parent, acting sick, refusing to go to school, and worrying about their parent(s) dying. In older children and teenagers, depression may manifest as irritability, sulkiness, problems at school, or drug/alcohol use.8

According to the World Health Organization (WHO), more than 300 million people worldwide suffer from depression, and as a result, may suffer a myriad of short- and long-term effects.9 Depression can make even simple tasks, such as getting out of bed, preparing meals, and going to work, a challenge. Commonly associated with symptoms such as loss of energy, difficulty concentrating, and a loss of interest in most activities, depression can turn daily chores into large hurdles that must be overcome to successfully meet daily personal, work, or academic expectations.

Depression can lead to many serious consequences, and depression usually worsens if untreated.2 Feelings of hopelessness and worthlessness may lead the individual to engage in self-defeating behaviors and unhealthy lifestyle choices (e.g., drug and alcohol abuse, neglect of personal health, and self-harm).

Depression is associated with physical health problems such as:2,10,11

At least some of the connection between depression and these issues may be because individuals with depression tend to have unhealthy eating patterns, exercise less, and have difficulties taking care of their health.10

Other possible complications linked to depression include:2

*WHO reports that suicide is the second-leading cause of death in individuals aged 15–29 and that nearly 800,000 people die by suicide each year.

According to the American Psychiatric Association (APA), of all mental disorders, depression is among the most treatable, as 80% to 90% of people who have depression eventually find relief with treatment.6

Major depressive disorder treatments may involve one or both of the following: 6,14

For patients with severe depression that does not respond to other treatments, brain stimulation therapies such as electroconvulsive therapy (ECT) or repetitive transcranial magnetic stimulation (rTMS) may be beneficial.15

Other complementary approaches that may help alleviate symptoms of depression include:16-19

These approaches may help as part of a comprehensive treatment plan but should not be used in place of other methods of care recommended by the patient’s healthcare provider, such as major depressive disroder medication and/or therapy.14

Depressive disorders such as MDD commonly co-occur with substance use disorders (SUD). In fact, about 20% of Americans with a mood or anxiety disorder also have an SUD.20 One study found that about 27% of individuals with major depression also had substance abuse or dependence at some point in their lives.21

Comorbidity, as defined by the National Institute on Drug Abuse (NIDA), refers to two or more disorders that occur in the same individual at the same time or one after the other. NIDA reports that roughly half of the people who experience a mental illness will also experience a substance use disorder during their lifetime (and vice versa).22

With mood disorders, it is common to turn to substance use to try to reduce mood symptoms,23 which in turn can worsen the symptoms. For example, large amounts of alcohol has mood-depressant effects and might worsen the depressed mood of an already depressed individual. Heavy illicit use of opioids is also associated with more severe depression. Comorbidity results in greater levels of impairment and more severe depression.24

Treatment for Co-Occurring MDD and Addiction

For people with co-occurring mental illness(es) and substance use disorder(s), integrated care that treats all psychiatric disorders provides better results.

While symptoms of depression may worsen following substance withdrawal, detox is an essential step for many individuals who are dependent on substances to take toward overall mental health. In a supervised inpatient medical detox environment, a staff of doctors and nurses can monitor the patient’s physical health, safety, and emotional state, intervening if necessary.25 Many programs will incorporate therapy during detox to provide emotional support during what can be a physically and mentally trying period.

Medications may be used in conjunction with these various forms of therapy to treat alcohol, opioid, or nicotine addiction. Medications such as antidepressants may also be initiated to address mental health conditions.

Unfortunately, less than half of people suffering from depression worldwide receive effective treatment.9 The social stigma of depression and other mental illnesses is just one of many reasons people fail to obtain proper treatment for the disease. Lack of properly trained healthcare providers and appropriate resources are two other roadblocks to getting effective treatment for some individuals. If you are suffering from depression and/or substance addiction, you don’t have to continue suffering. There is help available and, often, insurance will cover at least part of the cost.

Reach AAC Out for Help

If you are experiencing symptoms of depression or thoughts of suicide, help is available. Please call a suicide helpline or 911 immediately if you are having thoughts of harming yourself.

Last Updated on February 22, 2022
Share
Sophie Stein, MSN
Sophie Stein, MSN, received her master's of science in nursing from Vanderbilt University and has previously worked as an advanced practice registered nurse at an outpatient psychiatric practice.
Related Topics
Related Tags
co-occurring disorders
Depression
Don’t wait. Call us now.
Our admissions navigators are available to help 24/7 to discuss treatment.
Why call us?
Get addiction help now (24/7 helpline)We’re here for you every step of the way.