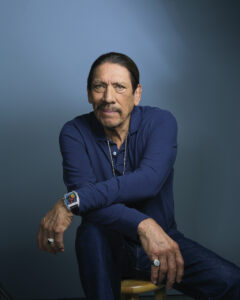 Danny Trejo is one of the most recognized character actors known for roles in films such as “Desperado,” “From Dusk Till Dawn,” “Machete,” and the sequel “Machete Kills.” But, what many may not know is that he has been in recovery for more than 54 years.

Trejo’s history with substances and encounters with law enforcement began at a very early age: When he was seven, he participated in his first drug deal, at 10, was arrested for the first time, began using substances at age eight and by 14, he was addicted to and selling heroin. He had many stints in jail throughout his adolescence, and by 22, he was a prisoner at San Quentin.

It was in 1968, while in solitary confinement, that he found faith, became a member of the prison’s 12-step program and began a life in sobriety. He was released from custody for the last time in 1969.

Trejo began his unique path to acting in 1985. He was working as a substance use counselor and his assistance was needed by someone on the set of the film “Runaway Train.” While on the set, he was recognized by the screenwriter, who served time at San Quentin with Trejo. Knowing his history and expertise in boxing, this connection led him to become the personal trainer and boxing advisor to actor Eric Roberts.

In the decades since, Trejo has appeared in more than 300 films and television shows, is the owner of eight restaurants, and is a New York Times best-selling author with his memoir, “Trejo: My Life of Crime, Redemption and Hollywood.” Danny Trejo joins “Addiction Talk” to speak about his inspirational 50+ year journey in recovery.