The Connection between Anxiety and Alcohol

Anxiety and alcohol use are often connected. People often drink to relax and reduce anxiety, and in some instances, chronic alcohol abuse can lead to anxiety. With both alcohol use and anxiety being so prevalent in the US, it’s no surprise that the two are often linked.

Take Our “Am I an Alcoholic?” Self-Assessment

Take our free, 5-minute “Am I an Alcoholic?” self-assessment below if you think you or someone you love might be struggling with an alcohol use disorder (AUD). The evaluation consists of 11 yes or no questions that are intended to be used as an informational tool to assess the severity and probability of an AUD. The test is free, confidential, and no personal information is needed to receive the result.

Alcohol Use and Abuse

Alcohol is one of the most common drugs consumed in the US. A 2012 survey conducted by the Substance Abuse and Mental Health Services Administration (SAMHSA) showed that about two-thirds of people over the age of 12 surveyed reported drinking alcohol in the prior 12 months. Legal for consumption for those over age 21, alcohol is often used in social situations; people drink to relax and to celebrate.

According to the National Institute on Alcohol Abuse and Alcoholism (NIAAA), the initial effects of alcohol can be felt within 10 minutes of it entering the body. As more alcohol is consumed, a person’s blood alcohol content (BAC) level increases. As an individual’s BAC rises, they become more and more impaired by the effects of the alcohol.

Common symptoms of alcohol intoxication are:

The more alcohol consumed, the more dangerous the effects become. Heavy consumption can result in alcohol poisoning. Essentially, a person can consume enough alcohol to result in coma or even death, showing just how serious extreme use of alcohol can be.

Alcohol abuse is a common problem among adults in the United States. According to NIAAA, as of 2012, 6.2 percent of the adult population in the country had some kind of alcohol use disorder (AUD). The severity of a disorder can vary, but common symptoms of AUD include:

Alcoholism is a disease that often arises from abuse of the drug. It results in dependence on alcohol, which can lead to strong cravings, a loss of control over consumption, and a drastically increased tolerance, according to Medline Plus.

Anxiety is part of life for many people. We often feel anxious if faced with a problem or a stressful situation of some kind, and this is normal. However, many people feel more than just temporary anxiety. These individuals actually have an anxiety disorder, and unlike normal experiences with anxiety, they have prolonged periods, or intense bursts, of anxiety on a regular basis. Such disorders can have a drastic impact on daily life, as well as one’s ability to perform tasks at work and home. An anxiety disorder can affect virtually every aspect of a person’s life, often leading to damaged relationships and reduced overall wellbeing.

One of the most common anxiety issues experienced by individuals is generalized anxiety disorder (GAD). This disorder is characterized by excessive levels of anxiety that can last for months at a time.

According to the National Institute of Mental Health, symptoms of generalized anxiety disorder include:

There are other anxiety disorders as well, and they all have the potential to result in drastic effects on a person’s life. Like other mental health disorders, anxiety disorders can be effectively managed, often with a combination of medication and therapy.

How Anxiety and Alcohol Are Linked

Some people resort to the consumption of alcohol in an effort to deal with their anxiety issues. Because alcohol is a depressant and has a sedative effect, people often use the substance to unwind. As a person’s BAC rises, they often experience increased levels of relaxation. Some individuals use this tactic in order to mitigate stress in their lives.

However, the use of alcohol to decrease anxiety is a strategy that most often backfires. According to the Substance Abuse and Mental Health Services Administration (SAMHSA), anxiety is a mental health disorder that can be caused by prolonged drinking in some instances. Substance-induced anxiety can occur in those who have another anxiety disorder, such as GAD, and adding this additional anxiety issue only exacerbates the effects of the initial disorder. 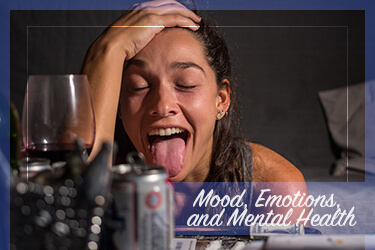 The Anxiety and Depression Association of America (ADAA) notes that 20 percent of people dealing with social anxiety disorder suffer from some form of alcohol abuse or dependence. While alcohol can reduce anxiety temporarily, it can also increase anxiety within just a few hours of consumption. This includes even moderate amounts of alcohol, and the effects on anxiety can last into the following day.

A study done by the University of North Carolina School of Medicine showed that excessive drinking can lead to the rewiring of the brain. This can make an individual more susceptible to the development of anxiety problems. While alcohol abuse can increase a person’s risk for a traumatic event that could lead to post-traumatic stress disorder, the changes that can occur in an individual’s brain can be enough to increase their risk for anxiety issues as well. The UNC study showed that there is a connection between alcohol and anxiety on a molecular level.

As noted earlier, alcoholism often results in physical dependence on the substance. This can result in withdrawal symptoms when alcohol leaves a person’s system. Symptoms such as sweating, trembling, nausea, and increased heart rate may all present. In addition, a person experiencing alcohol withdrawal may become anxious, showing another correlation between the two conditions.

While people may use alcohol as a form of treatment for anxiety, the negative effects of this kind of self-medication quickly outweigh any of the short-term positive relief one may experience. According to ADAA, treating a substance abuse problem will not necessarily address a concurrent anxiety problem. It is best to treat both conditions simultaneously. If one of the two problems is not addressed, the potential for relapse to the other condition increases. In cases of co-occurring disorders, the symptoms of one disorder are often a trigger for the other disorder. For example, anxiety is often a trigger for alcohol abuse. If only the alcohol issue is addressed, anxiety will inevitably be a recurring issue for the person, and it’s likely that they will ultimately relapse to alcohol abuse to deal with the issue.

It’s imperative to choose a treatment program that is equipped to address both co-occurring disorders. Supervising physicians need to take care in prescribing medications to address anxiety, particularly since benzodiazepines are often used, and these can be highly addictive. Since the person has a history of substance abuse, the chances of abusing a prescription for benzodiazepines is heightened. As a result, physicians may opt for medications with low abuse potential in addition to more holistic treatment measures. If medications are prescribed, they will be closely supervised by medical personnel.

It is crucial for medical professionals to be aware of any comorbidities – the presence of concurrent chronic disorders. This certainly applies to those battling both alcohol abuse and an anxiety disorder. Strategies to deal with one condition may need to be modified due to the concurrence of multiple issues. Treatment must involve an integrated approach to ensure the best chances of recovery on all fronts.

You Might Also Be Interested In
Last Updated on April 29, 2021
Share
Meredith Watkins, M.A., M.F.T.
Meredith Watkins is a licensed marriage and family therapist who specializes in dual diagnosis and eating disorders.
Related Topics
Related Tags
alcohol
co-occurring-disorders
Don’t wait. Call us now.
Our admissions navigators are available to help 24/7 to discuss treatment.
Why call us?