Naltrexone & Alcohol: Can I Drink While on Natrexone?

The opioid antagonist Naltrexone (brand names: ReVia, Vivitrol, and Depade) is approved to treat those who abuse opioid medications or alcohol. The drug comes in a pill form (Depade and the more popular version ReVia) and as an extended-release injectable form (Vivitrol). Naltrexone is designed to reduce and suppress cravings for alcohol or opiate drugs. It does this by binding to the opioid receptors in the person’s brain (thereby removing any opiate drugs on these receptors) and suppressing cravings.

Naltrexone is considered to have no abuse potential and does not result in the development of physical dependence. An individual must obtain a prescription in order to legally obtain it, and the medication is typically used in situations where individuals are actively recovering from alcohol use disorders or opiate abuse.

Naltrexone does not treat withdrawal symptoms; rather, it is designed to suppress cravings for alcohol or opiate drugs. Individuals with moderate to severe alcohol use disorders who are using naltrexone may experience withdrawal symptoms if they stop drinking that can be potentially fatal due to the development of seizures. These individuals should consult with an addiction medicine physician or psychiatrist before discontinuing their use of alcohol.

If you or someone you love may be struggling with an addiction, and are interested in exploring whether insurance may be able to cover all or part of the cost of treatment, use our insurance verification tool below.

Side Effects of Naltrexone

Naltrexone is considered safe to use and associated with few side effects; however, all medications have a side effect profile. Side effects as a result of naltrexone use are reported to be relatively rare, but they do occur in some instances. 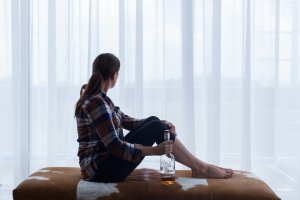 There appear to be no significant dangers associated with taking naltrexone and drinking alcohol. Information provided by the FDA and by the National Institute on Alcohol Abuse and Alcoholism (NIAAA) report that individuals who drink alcohol and use naltrexone:

Thus, research supports the notion that naltrexone is effective in reducing alcohol intake but not effective in promoting abstinence from alcohol. Individuals in these studies often continued to drink alcohol while on naltrexone, and there were no significant or dangerous effects noted. In fact, one method of treating alcohol use disorders known as the Sinclair Method suggests that individuals take naltrexone about one hour before they begin drinking alcohol. At least one research study has suggested that taking naltrexone in this manner (only taking the drug one hour before one is planning to drink alcohol) results in a significant reduction in alcohol cravings and intake compared to the suggested use of naltrexone, which is to take it in the morning and attempt to remain abstinent from alcohol. The developer of this method, Dr. Sinclair, reported that using naltrexone before drinking alcohol in this manner is significantly more effective in reducing alcohol intake than using naltrexone as an attempt to help the person become or remain abstinent from alcohol. These research reports still need further investigation and replication.

Using naltrexone in conjunction with alcohol will not:

The standard method of using naltrexone is for individuals in recovery from alcohol use disorders or opiate use disorders to take the medication in the morning while trying to remain abstinent from these drugs.

Research findings are mixed, but overall, they tend to support the notion that individuals who use naltrexone to treat alcohol abuse reduce the total amount of alcohol they consume and observe a reduction in the number of times they drink alcohol. In addition, heavy drinkers often notice significant reductions in alcohol use. However, the research does not indicate that the use of naltrexone is effective at assisting individuals in remaining totally abstinent, but it does most likely result in a significant reduction in cravings for alcohol and an overall reduction in the amount of alcohol consumed.

Like any drug, naltrexone can only work if an individual uses it, and there is evidence to suggest that issues with compliance often reduce its effectiveness.

Research findings do not suggest that naltrexone is a cure-all for alcoholism. Rather, taking naltrexone should be accompanied by formal substance abuse treatment.

There appear to be no recorded significant dangers of drinking alcohol while taking naltrexone. There is research that suggests that the drug may be more effective in reducing alcohol intake if it is taken prior to drinking alcohol as opposed to using it and attempting to remain abstinent from alcohol. This research needs to be replicated.
You Might Also Be Interested In
Last Updated on May 5, 2021
Share
Marisa Crane, B.S.
Marisa Crane is a writer and editor specializing in mental and behavioral health.
Related Topics
Related Tags
alcohol
mat
naltrexone
Don’t wait. Call us now.
Our admissions navigators are available to help 24/7 to discuss treatment.
Why call us?