The year 2020 was dominated by a few narratives. Although Covid-19 was rightfully on the forefront of many of our minds, a new civil rights movement was on the forefront of many of our hearts. From the war on drugs and its racial implications to socioeconomic issues with their inherent legal biases, black people experience a unique relationship with addiction and treatment. While the data speaks to broad brush strokes, it’s important to acknowledge individuals are individuals with individual experiences. However, for the sake of this article, we’re going to speak on cultural inferences.

As stated, the black population actually enters rehabilitation at 15.2% versus 9.6% of the general population of whom need substance abuse treatment. However, due to multiple factors, the rates of recovery success are lower. In short, socioeconomic issues that lead to legal recidivism and relapse are the main culprit. Without certain and necessary resources, the support structure for the black population is null and void. Again, individual circumstances dictate individual stories, but culturally, this is a societal problem.

So, now let’s talk about trauma on a racial scale. Multiple studies through decades has shown that the black population struggle with anxiety, depression, and symptoms of PTSD at markedly higher rates than white people. This is significant, as relapse has a strong correlation with co-occurring mental health concerns. In addition, receiving mental health treatment before a crisis point is more common amongst white individuals. With socioeconomic circumstance that begets a lack of resources, the lower rates of sustained recovery are all but baked into foreseeable scenarios.

In 2011, a study was conducted concerning the legal outcomes of black and white drug offenders. Blacks were incarcerated at 5-7 times higher rates than whites. Again, the war on drugs remains a significant contributor to this. However, a 2018 National Survey on Drug Use and Health found that 6.9% of African Americans had a substance use disorder compared to a rate of 7.4% among the total population. Together, these statistics infer that those with resources can plea out for differed prosecution through a drug court or rehabilitation program, while those without resources are not presented with this option. Although this disparity is garnering more attention, it’s worth repeating here.

It’s also important to reiterate that many of these convictions are harsher because of repeat offenses, which alludes to the previous point concerning relapse and lack of resources for the black population who enter treatment. Stereotypes and legal biases definitely play a role in the cycle, but the cycle itself and its lack of psychological, historical, and societal nuance also perpetuates the complex and unique issue concerning blacks in addition treatment. 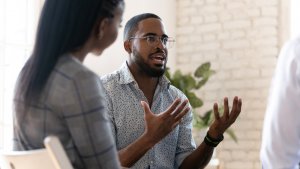 While there are no hard and fast fixes to addiction for any distinct gender or race, cultural competency is a step in the right direction. Much like gender-specific rehab centers, facilities that provide a culturally responsive component for African Americans has shown to increase success rates. The cultural differences between provider and client can work to disenfranchise a client who would benefit from empathy and experiential recognition. Simple considerations such as recognizing the culture of predominately black churches to engage spirituality or ensuring transportation is available to get black people, or any impoverished person for that matter, into addiction treatment is crucial.

Again, we must flesh-out the term ‘underrepresentation.’ In this case, it simply means the recovery community could do more to programmatically represent, in relation to the societal need, more for a people who could use simple, sustained, accessible, and culturally competent support.

Matt Berry
Author
Matt Berry is a published author, award-winning journalist and editor. For more than a decade, Matt has specialized in covering U.S. substance abuse … Read More
Read Our Editorial Policy
Recent Posts
Related Tags
addiction
treatment
Don’t wait. Call us now.
Our admissions navigators are available to help 24/7 to discuss treatment.
Why call us?
Prefer texting to talking on the phone? We’ve got you covered 24/7.
Instead, sign up for text support to receive: