It’s Not All Fiction: 3 Series Show Substance Use for Real

Every evening, the girls at Methuen Orphanage in Kentucky line up to receive two pills – green and red. These vitamins, so they are told, are good for you. Hurry up and take them. However, a long-time resident, Jolene, advises Beth Harmon, the main character, to veer from this rule. Pretend to swallow both but save the green one until lights out. This green pill infused ritual plays a major role in The Queen’s Gambit. 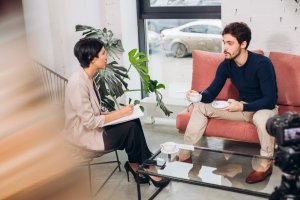 Streaming on Netflix, this fictional limited series tells the story of a chess prodigy, set mainly in the 1960’s. The plot draws upon a novel by the same name released in 1983 with a coming-of-age theme. In both, elements of make believe intersect with reality. This is where the green pills come in. The show calls them “xanzolam,” which is a fabricated name. Along the same lines, they are not vitamins, but rather tranquilizers. What is real is the “common practice” of giving sedatives to children in orphanages in those days to keep them calm.

A post in Newsweek explains. The green pill “is likely a fictional version librium or chlordiazepoxide,“ approved for medical use in 1960. A benzodiazepine sedative, it “was often delivered in half-green capsules.” There’s more truth here, albeit with liberties taken. All of a sudden in the show, the dispensing of green pills halts. That mirrors legislation enacted around that time. Accordingly, “the state understandably creates a law that prevents kids being given tranquilizers.”

No more pills and no harm? No such luck. The effects of too many for too long had set in. “By that time, the damage has been done. Beth has become addicted to the pills—an addiction that goes right through to her adult years.’ The Queen’s Gambit delves into more substances and the perils of addiction. It’s a compelling mix of art and life, darkness and joy.

After a long day of roughing up people and directing his family’s business , Thomas Shelby reclines and relaxes. Leader of a notorious gang, he retreats to a solitary space and smokes. But that’s not a plain vanilla substance he’s puffing in his pipe. It’s all part of the storyline in Peaky Blinders, a series streaming on Netflix.

Set in Birmingham, England, in the 1919, the show is fictional but with numerous realistic touches. As Decider reveals: “Peaky Blinders is actually based on a true story. Well, kind of.” The group existed in that location around that time. However, “the series is highly dramatized and fictionalized to create as much drama as possible.” And by the way, Peaky Blinders takes its name from the “practice of sewing razor blades into the peaks of their caps.” That’s real and, what’s more, using those razor blades to inflict harm is in the same category.

Drinking, drunkenness and smoking are daily occurrences in the plot; the reference above to smoking is in the same category, Tommy is a veteran of World War I, where he endured a stretch of service in a tunnel. He has frequent frights and flashbacks to that time, akin to the symptoms of post- traumatic stress disorder (PTSD). During the day, he is busy and his mind is occupied. But at night, his anxiety runs rampant. So he “self-medicates” by smoking brown opium. His brother Arthur also has a predilection for drugs and favors cocaine. Arthur’s “use of the drug is more than just an aspect of his character. It’s also rooted in history. During the period following World War I, cocaine saw a rise in popularity.”

Peaky Blinders is a period drama. But its depiction of drug use is part of its “themes that are relevant today.”

Seated at a crowded bar in London, Rob Norris tells the stranger next to him, Sharon, he must be the only person there who waited 40 minutes for “just a Coke.” His teetotaler status doesn’t dampen the intense attraction they have for one another. Off they go to his hotel room then and throughout his weeklong business trip in that city. When back in the U.S. sometime later, he gets a call from Sharon. She’s pregnant. That’s the beginning of Catastrophe, a genial comedic series that evokes laughing out loud. It also depicts the struggles those in recovery may contend with painfully and poignantly. 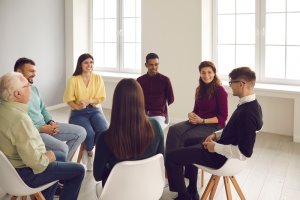 Alcoholism is a true theme for the person who co-scripted and co-starred in the show. That would be Rob Delaney in real life AKA Rob Norris on the small screen. He knows about battles with substance use firsthand. After a near-death drunken auto accident, Delaney has been sober for 19 years. For two of the show’s three seasons, Rob manages his recovery. It may have stayed that way if the co-creator, who plays Sharon, had not prevailed. She wanted the series to address the issue.

Alcohol inches back into Rob’s life. And it does so insidiously and interestingly. It didn’t go unnoticed in the media. Salon.com claimed: “’Catastrophe’ gives TV a realistic view of alcoholism at last.” IndieWire.com agreed: “’Catastrophe’: Rob Delaney and Sharon Horgan on Depicting a Type of Alcoholism Rarely Seen on TV.”

This last post explains: “Alcoholics on TV tend to fall into two categories: functioning alcoholics like ‘Mad Men’s’ Don Draper, whose wardrobe isn’t complete unless accessorized with a cocktail, or acknowledged alcoholics who clearly should never touch the stuff, such as drunken dad Frank Gallagher on ‘Shameless.’ Rob Norris falls somewhere in between.” See for yourself of Amazon Prime.

Sherry M. Adler
Author
Sherry M. Adler is a freelance writer based in the Greater New York City area, dedicated to using the power of words to inform and energize people.
Read Our Editorial Policy
Recent Posts
Related Tags
drug addiction
substance abuse
tv shows
Don’t wait. Call us now.
Our admissions navigators are available to help 24/7 to discuss treatment.
Prefer texting to talking on the phone? We’ve got you covered 24/7.
Instead, sign up for text support to receive: