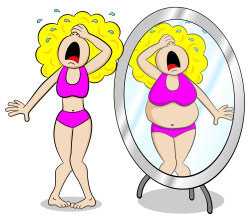 The average woman looks into a mirror about eight times per day, according to an overview article in The Daily Mail, and women might also use sunglasses, windows, phone cases, and other reflective surfaces to check on appearance issues when no mirrors are handy.

For some people, these daily checks are a source of extreme misery. That’s because these people see one or two things in the mirror that they assume are horrific, ugly, terrifying, and impossible to ignore.

The issue is body dysmorphic disorder (BDD), and according to the Anxiety and Depression Association of America, it’s a mental illness characterized by negative thoughts about appearance. Typically, people with this disorder focus on one specific body part, and they feel unable to overcome their feelings about that body part.

These aren’t passing thoughts that might drift into and then out of a person’s mind on a regular basis. These are persistent obsessions about the body part that can cause a person extreme mental anguish.

Unless this condition is treated, it can lead to physical consequences as well.

Researchers aren’t quite sure what causes BDD, but according to Mayo Clinic, genes could play a role. The disorder is more common in people with family members who also have the disorder, so there might be some sort of genetic marker that’s passed from one generation to the next that causes these unusual thinking patterns.

Research suggests that unusual brain patterns could play a role. Researchers used specialized equipment to examine the brains of 14 people with BDD, measuring electrical activity while people looked at photos of their bodies.

But this shift in thinking isn’t benign. People with BDD have severe lifestyle disruptions as they don’t have enough time to handle daily life and the demands of the disorder. The hours they spend looking at or attempting to fix the perceived problem are hours they should be spending in activities that bring them prosperity or joy. They can lose relationships, jobs, and opportunities because they can’t shift their thoughts to something that’s rewarding.

Writers for PsychCentral also suggest that BDD can lead to complete isolation. People with the disorder may become convinced that the defect makes them unfit to socialize with others. They don’t want to inflict their extreme ugliness on people they care about, so they may refuse to leave the home altogether. They may think that they’re doing others a favor by staying away from social situations.

In time, BDD can lead people to drastic decisions. The International OCD Foundation suggests that up to 80 percent of people with this disorder have thought about or attempted suicide.

With therapy, people can learn to look past a perceived flaw, and they can start to focus on the beauty that’s within them and around them. Help is available, and healing is possible.
Last Updated on Sep 7, 2022
Share
About The Contributor