Crack vs Cocaine: What’s The Difference Between Crack & Cocaine?

Cocaine is an often abused drug, derived from the coca plant, and it’s found in both powder and rock forms. While the powdered form of cocaine is simply referred to as cocaine or coke, the rock form is often referred to as crack or crack cocaine.

Cocaine is a hydrochloride salt in its powdered form, while crack cocaine is derived from powdered cocaine by combining it with water and another substance, usually baking soda (sodium bicarbonate). After cocaine and baking soda are combined, the mixture is boiled, and a solid forms. Once it’s cooled and broken into smaller pieces, these pieces are sold as crack.

The name crack derives from the crackling sound that is produced when the drug is heated and then smoked, according to the Center for Substance Abuse Research. Since crack is so highly concentrated, it is extremely addictive. While not common, it’s possible for a person to become addicted to crack after just one use.

Another difference between crack and cocaine relates to the high produced. The intensity and duration of the high largely relate to how the drug is taken, per the National Institute on Drug Abuse. Generally, when cocaine is injected or smoked, the drug takes effect more quickly, resulting in a more intense but shorter high. When cocaine is snorted, it takes longer to feel its effects but the resulting high lasts longer.

According to a clinical pharmacist, cocaine and crack produce very different effects in the body, largely related to how they are usually administered. When cocaine is snorted, its effects occur in about 1-5 minutes; they peak within 20-30 minutes; and they dissipate within 1-2 hours. The effects of crack take hold in under a minute, peak in 3-5 minutes, and last 30-60 minutes. If cocaine is injected, however, the effects begin, peak, and last for about as long as crack. While injection is not the most common method of cocaine consumption, it is used by some people.

Effects and Risks of Crack vs. Cocaine Use

Smoking crack causes these effects to take hold more quickly and intensely than cocaine because crack is absorbed through the membranes of the lungs, entering the bloodstream and the brain within 10-15 seconds. As such, the risk of overdosing is extremely high, leading to convulsions, coma, and death. Symptoms of crack overdose are rapid heart rate and hyperventilation.

It is easy to develop a crack or cocaine abuse problem because the drug in both forms is highly addictive. As such, issues with withdrawal often arise. Symptoms of withdrawal include:

Who Uses Crack, and Who Uses Cocaine?

A 1/8 ounce of cocaine (3.5 grams), or 8-ball, may cost between $120-150, while a 1/10th gram of crack, or a rock, may cost between $10-25. Cocaine is expensive to buy on the streets. Crack was developed as a cheaper alternative to cocaine, making it more easily affordable to users. As a less expensive alternative, it became more accessible to those in the lower socioeconomic demographic. These people had less disposable income available to spend on drugs, but they were seeking options to get high. This brought crack use to low-income and minority communities. By the 1980s, there was an epidemic of crack use in these communities.

As a result, there is a public perception that cocaine is associated with more affluent drug users, whereas crack use is associated with those in lower income brackets and minorities. Despite this widespread belief, information from the National Institute on Drug Abuse showed that in 1991, the majority of crack users were Caucasian.

Generally, those who want a more intense, faster, cheaper high are attracted to crack. Some people begin with cocaine use and then transition to crack use when the habit of cocaine use is too expensive to maintain.

Before 1986, federal laws treated crack and cocaine the same. News coverage during that time reported a crack epidemic, according to Newsweek, stating that crack was “the most addictive drug known to man.” The Anti-Drug Abuse Act of 1986 enacted a five-year minimum sentence for a first offense of possession of at least 5 grams of crack. The same law also required possession of at least 500 grams of cocaine to reach the same five-year minimum sentence. This began the so-called “ratio sentencing;” it took 100 times the amount of cocaine as crack to earn a mandatory minimum five-year sentence.

Passage of this act immediately resulted in the prosecution of many African American males who were caught with as little as 5 grams of crack. Since these men often resided in low-income neighborhoods, crack was more readily available due to its ease of production and low price.

African Americans became the criminal targets of the crack epidemic. Most defendants in crack trials were African American while those in powdered cocaine trials tended to be Caucasian or Hispanic. In 2002, African Americans represented more than 80 percent of those charged with crack offenses.

This created racial and social disparity in the legal process that endured until the passage of the Fair Sentencing Act of 2010, which eliminated the five-year mandatory minimum sentence and increased the amount of crack necessary to result in the minimum sentence.

The Act also changed the crack-to-powder-cocaine ratio regarding the amount required to impose an equal sentence from 100-to-1 to 18-to-1. While the disparity in sentencing is still great at 18:1, it is significantly reduced. 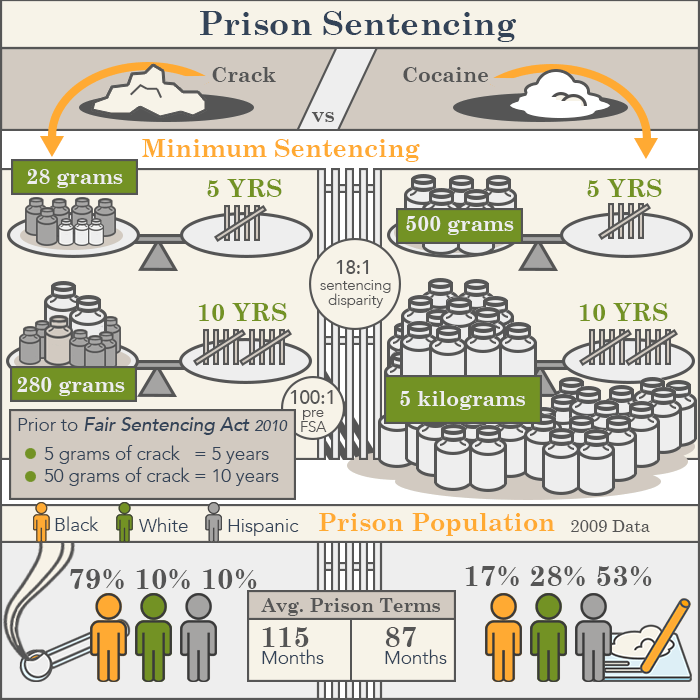 To estimate of the effects of cocaine or crack addiction on a person’s long-term physical health, check out our online calculator.

Last Updated on July 13, 2022
Share
Editorial Staff
The editorial staff of American Addiction Centers is made up of credentialed clinical reviewers with hands-on experience in or expert knowledge of addiction treatment.
Related Topics
Related Tags
cocaine
Don’t wait. Call us now.
Our admissions navigators are available to help 24/7 to discuss treatment.
Why call us?
Get addiction help now (24/7 helpline)We’re here for you every step of the way.