Dangers of Mixing Alcohol and Codeine 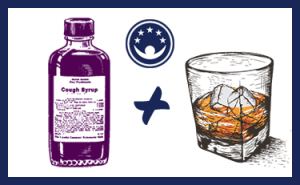 Codeine is a mild narcotic painkiller and antitussive, or cough suppressant, which was once widely available in cough syrups in the US. Although it is still available, it is now a prescription-only drug, used to treat moderate or severe pain, and reduce cough in some serious illnesses.

It is not meant for long-term use. Although the Drug Enforcement Administration has moved it to either Schedule II or III (depending on dose), it is also considered a Schedule V substance in extremely low doses, meaning it is not as tightly controlled as pain-relieving doses.

Because codeine is an opioid drug, it is subject to nonmedical use, diversion, and addiction. People who abuse codeine to get high report various symptoms, including:

Mixing any opioid drug with alcohol is dangerous, although people often mix these drugs. Alcohol notoriously increases the high associated with opioids, amplifying for a short time the relaxed, pleasant high these painkillers produce. However, mixing opioids and alcohol increases the risk of overdose and long-term health damage. Mixing codeine and alcohol is particularly popular with young people.

Why Mix Codeine and Alcohol Together?

Because codeine is an opioid, its effects include a lowered perception of pain and pleasurable feelings. When combined with alcohol, these effects are temporarily enhanced. While they work in different parts of the brain – codeine binds to opioid receptors while alcohol affects the GABA receptors – both drugs interact with neurotransmitters, particularly dopamine and serotonin.

Both of these neurotransmitters are tied to mood, so when they are more available to the brain, the person feels better and happier. However, once the drugs wear off, the reduction in these neurotransmitters can lead a person to feel depressed; the reward system, fed primarily by dopamine, may cause a person to compulsively seek out the drugs that made them feel good in the first place. This may lead to addiction.

The mixture of cough syrup—initially codeine-based, now more commonly dextromethorphan-based—with alcohol has been popular for decades, particularly around the hip-hop culture. DJ Screw became closely affiliated with it because users felt the concoction enhanced his bass-heavy, slowed-down remixes of hip hop music. This mixture of cough syrup and alcohol is commonly known as purple drank, also known as lean, Texas tea, or sizzurp.

DJ Screw’s influence, both in music and drug form, spread across the US. The artist himself died from an overdose of the codeine and alcohol mixture in 2000. A few years later, the DEA changed the scheduling on codeine to make it harder to acquire, but damage through pop culture had been done. Rappers like Lil Wayne still sing about the drink, which sometimes involves the addition of hard candy and soda to enhance the syrupy flavor. Two decades later, the deadly cocktail continues to be popular among adolescents and young adults.

Short-Term Harm from Codeine and Alcohol

There are several serious side effects associated with combining codeine and alcohol. In the best case, a person who consumes these two intoxicating drugs together may experience:

This combination of sedative effects can cause serious accidents, including car accidents and falls. Head injuries, broken bones, and damage to internal organs can all occur due to an accident while intoxicated.

One of the most serious short-term risks from mixing even a small amount of codeine with alcohol is dangerous respiratory depression. This means that a person will take shallower breaths, breathe less often, or breathe irregularly. Respiratory depression reduces the amount of oxygen reaching the brain and body, which can cause long-term damage to major organ systems, lead to a coma, or cause death when the brain shuts down.

Taking too much of an opioid alone can cause respiratory depression, but mixing codeine and alcohol greatly increases the risk of this deadly side effect. Some people have accidentally overdosed by taking codeine as prescribed, then consuming a few alcoholic beverages. When a non-opioid drug like alcohol is involved in an opioid overdose, the condition becomes harder to treat.

According to the DAWN Report, in 2010, there were 81,365 emergency room admissions due to a combination of opioids and alcohol. Combining these drugs led to more serious outcomes, including long-term hospital stays.

Long-Term Harm from Codeine and Alcohol

Abusing codeine and alcohol increases the risk of liver and kidney damage. Alcohol abuse by itself is one of the leading causes of liver damage in the US; codeine, when added to alcohol, adds to stress on the liver, which spills over into kidney damage too.

The combination of alcohol and codeine can also cause damage to the gastrointestinal system, increasing the risk of abdominal bloating, inflammation leading to colitis or other conditions, ulcers, indigestion, and malnutrition.

Mixing alcohol and codeine, or any other combination of intoxicating substances, can lead to addiction and dependence. Thankfully, you can get help overcoming addiction and drug abuse before long-term harm occurs. Recovery is possible for anyone.

Meredith Watkins, M.A., M.F.T.
Related Topics
Related Tags
alcohol
opioid
Don’t wait. Call us now.
Our admissions navigators are available to help 24/7 to discuss treatment.
Why call us?
Get addiction help now (24/7 helpline)We’re here for you every step of the way.