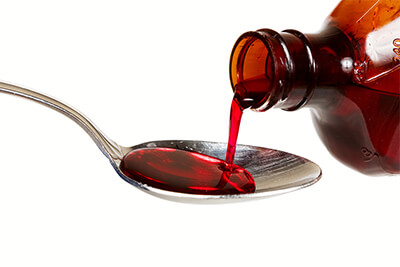 Dextromethorphan (DXM) is an antitussive, or cough-suppressing, medication that is available in over 100 different over-the-counter products. Its intended use is to control coughing associated with allergies or illnesses, such as the flu, the common cold, bronchitis, and other lung disorders. It comes in a number of different forms, including chewable tablets, lozenges, syrups, capsules, and even dissolvable strips to be placed under the tongue.

DXM addiction may also be referred to use DXM abuse and DXM misuse.

Medications that contain DXM include a number of familiar medications, such as Robitussin, NyQuil, Vicks Formula 44, etc. Street names for the drug include DXM, skittles, red devil, Robo, cousin, triple C, and a number of others. Some users commonly refer to miuse of this drug as Robo- tripping in reference to its being consumed in cough syrups (the term Robo being taken from the cough medicine Robitussin).

The drug has an interesting history, as it was released in the 1950s and became a significant drug of misuse that was eventually removed from the market. Later, manufacturers began to redistribute the drug in a formulation that had a significant unpleasant taste in an effort to curb misuse of the drug; however, sales were poor, and manufacturers began making it taste better. This opened the door for the drug to become a significant drug of misuse again, mostly with younger people. Because dextromethorphan is not a controlled substance and can be purchased in a number of over-the-counter products, its potential misuse is even more problematic.

The Mechanism of Action of DXM

DXM is actually produced from a derivative of morphine, but it is not an opiate and has a different mechanism of action from opiate drugs like Vicodin, OxyContin, heroin, morphine, etc. DXM has an affinity for receptors in the brain that are specialized for the excitatory neurotransmitter NDMA (N-methyl-D-aspartate). It is an antagonist for NDMA, meaning it inhibits the actions and release of NDMA, and this action accounts for its efficacy in suppressing the coughing reflex.

When taken as directed, the drug actually has very few side effects that include some potential for nausea, stomach cramps, constipation, mild dizziness or drowsiness, and mild headache. When taken in amounts far beyond its recommended dosages or at frequent intervals at significantly less than four hours apart, the drug has a number of different effects, depending on the dosage.

The Effects of DXM

The effects associated with taking any drug or medication will vary by the dosage or amount takes, and DXM is no exception this case. The recommended safe dosages for the use of DXM vary between 15 mg and 30 mg taken within a four-hour period. Taking the medication in this dosage and at these recommended time periods will not result in any significant effects, and the antitussive effects will typically last throughout the timespan associated with this recommended use. Of course, individuals who misuse the drug will not adhere to this recommended schedule.

The Drug Enforcement Administration (DEA) reports that there are four levels or plateaus of misuse that occur with DXM. In its most recent release of its analysis of the effects of DXM misuse, the DEA listed DXM as a “drug of concern.” The four plateaus of misuse listed by the DEA include:

Extremely high doses of DXM have been known to be potentially dangerous as a result of extreme sedation, extremely suppressed breathing rates, and the potential to develop a heart attack. Individuals who overdose on DXM are often given the opiate antagonist naloxone, which appears to have some utility for reducing the effects of DXM overdose.

In addition, individuals who use DXM in high doses are at risk for harm due to poor judgment, impulsive behavior, or as a result of the perceptual disturbances that occur with the drug. For instance, an individual driving a car under the influence of a heavy dose of DXM would be more likely to get in an accident as a result of visual distortions that interfere with the person’s ability to drive. The DEA reports a number of serious accidents due to younger individuals being under the influence of DXM.

The varying effects of DXM that occur by dosage indicate that the effects of DXM are similar to dissociative hallucinogenic drugs like ketamine and phencyclidine (PCP). These drugs are recognized as extremely dangerous drugs of misuse, and in high doses, DXM appears to produce similar effects and carry similar dangers.

The Substance Abuse and Mental Health Services Administration (SAMHSA), the DEA, and NIDA all report that while repetitive use of substances containing DXM can lead to significant tolerance for the drug, there is no reliable evidence indicating that individuals who chronically use or misuse DXM develop withdrawal syndromes. Based on the current evidence, it does not appear that individuals develop physical dependence on DXM. Individuals who repeatedly use substances for nonmedicinal purposes and suffer negative ramifications as a result of their drug use qualify for a potential diagnosis of a substance use disorder (the current clinical term to identify both substance misuse and addiction).

The latest data available from SAMHSA indicates an increasing trend for misuse of antitussive agents for the period of 2004-2011.

Again, the results indicate a general increasing trend over this time period. SAMHSA and the DEA report that the misuse of DXM can occur across all age groups, but it is primarily focused in younger individuals between the ages of 12 and 26. In addition, SAMHSA reports that younger females between the ages of 12 and 17 may be slightly more likely than younger males in the same age bracket to misuse these medications; however, younger males over the age of 18 are more likely than females in the same age bracket to misuse the drugs.

Recognizing Signs of DXM Misuse and Getting Help

According to NIDA, individuals who misuse DXM often take it in combination with alcohol, cannabis products, central nervous system depressants like narcotic medications or benzodiazepines, and stimulant medications. Of course, this can result in a complicated situation as polysubstance misuse can typically present with a number of mixed effects and very serious complications that result from combining different drugs.

Because individuals who misuse DXM are often younger and may also be abusing other drugs in conjunction with DXM, whenever one is concerned that someone is abusing this drug, they should consult with a licensed mental health professional regarding the appropriate action to take. In some instances, attempting to put together a formal intervention may be appropriate. Loved ones can contact an organization like the Association of Intervention Specialists for professional advice on how to do this. An intervention occurs when concerned friends and family members of an individual who may have a substance misuse issue get together and attempt to convince that individual that they need treatment.

Treatment for DXM misuse will consist of a number of different components, such as initial inpatient admission, medically assisted treatments (e.g., medications for various symptoms), substance use disorder therapy (the foundation of treatment for any type of substance misuse issue), and participation in some form of social support. Some individuals will need additional treatments for co-occurring disorders and special interventions for specific needs, such as tutoring, job training, occupational therapy, speech therapy, etc.

Editorial Staff
Author, American Addiction Centers
The editorial staff of American Addiction Centers is made up of credentialed clinical reviewers with hands-on experience in or expert knowledge of addiction treatment. Read More
Read Our Editorial Policies
Related Tags
dissociatives
dxm
over the counter
Don’t wait. Call us now.
Our admissions navigators are available to help 24/7 to discuss treatment.
Why call us?
Get addiction help now (24/7 helpline)We’re here for you every step of the way.
;