GHB Abuse, Addiction & Treatment Near You

GHB is how the drug gamma hydroxybutyric acid is generally known. It is a naturally occurring neurotransmitter that has become a popular psychoactive drug. Medically, it’s often used as a general anesthetic or to treat sleep disorders such as insomnia and narcolepsy. It’s also sometimes used to treat clinical depression or alcoholism. Recreationally, it’s used for its psychoactive high and sometimes as a “date rape” drug. It’s commonly found in the rave scene under street names like G, liquid G, or liquid X due to its similarity in effect to MDMA (ecstasy)./

As a central nervous system depressant, GHB tends to produce a relaxing effect, like alcohol, sometimes to the point that the user can barely move or loses consciousness. It also creates blackout memory loss, making it an ideal date rape drug. However, in small doses, it acts more like a stimulant and an aphrodisiac, also producing a feeling of euphoria and an increase in sociability, which makes it a popular club drug. In its pure form, GHB is colorless and odorless, but it is often made into a white powder or salt.

GHB was made illegal in the US by the Food and Drug Administration (FDA) in 1990 for these reasons. However, in 2002, it was approved for the treatment of a common symptom of narcolepsy, though it is still highly controlled and recreational use remains illegal.

As a drug of abuse, GHB use can lead to overdose and death if too much is taken or if it’s mixed with other central nervous system depressants such as alcohol. Though studies on addiction to GHB have been inconclusive, heavy users often report experiencing withdrawal symptoms when intake stops.

GHB has been making a comeback as a party drug, used most often in nightclubs, raves, and various dance parties as an alternative to ecstasy. This means that the majority of recreational GHB users are young people, including high school students. Club drug use in general is still quite common among gay, lesbian, and bisexual individuals in the “gay club” scene, especially among gay and bisexual men. In one study sample of gay and bisexual men age 18-22, 40 percent had tried a club drug at least once in their lifetime.

However, another study found that heterosexual women were more likely to report use of GHB than lesbian and bisexual women, at 16 percent and 13 percent, respectively. Men were also found to be a whopping 6.13 times more likely than women to use GHB. Race and ethnicity did not seem to have an effect on use of this drug.
Another demographic in which GHB is popular is among bodybuilders. This substance has been shown to elevate human growth hormones significantly. Young men attempting to build muscle mass, and often wanting to do so quickly, may use recreational GHB in order to facilitate this process. 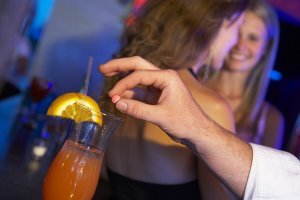 Many take to it due to misinformation about the substance as a miracle drug for muscle growth that induces sleep and produces a high at the same time. They can unfortunately end up hurting themselves in the process without achieving the desired results, as the effects of GHB are difficult to predict.
Last but not least, GHB is a very common date rape drug. Some men obtain the drug in the form of salt and use it to “spike” drinks in clubs or at parties. The reduced inhibitions, sedative effects, and increase in libido allow them to lure their victims away, assault them, and leave them with little to no memory of what happened. Besides the trauma of sexual assault, spiking drinks with GHB can be very dangerous. It’s difficult to measure the correct dose in salt form, especially for a person who has never used the substance before, so overdose potential is high. There have been reports of young women dying from consuming drinks contaminated with GHB. In addition, combining this drug with alcohol substantially increases the risk of overdose and death.

The effects of GHB are particularly noticeable and distinct from other common drug effects, whether people are currently on the drug or suffering from its aftereffects. It’s also important to keep in mind that prescription drugs, including GHB prescribed for narcolepsy or another illness, can be abused just like any illicit drug. Taking more than prescribed or using dishonest means to obtain a prescription that isn’t needed is also considered to be drug abuse. According to the National Institute on Drug Abuse, 52 million Americans over the age of 12 have used a prescription drug for a nonmedical purpose at least once.

Signs of GHB abuse include:

It’s unlikely that all of these will occur in the same person. These are possible effects, and which effects will appear in any given user is unpredictable. GHB users might act more like they’re drunk or more like they’re on ecstasy. Although there are distinctive symptoms, this makes it more difficult for GHB abuse in particular to be spotted. However, if alcohol or ecstasy abuse is ruled out, GHB may be the culprit.
With club drugs in general, any regular attendance at dance parties or raves is likely to lead to drug use. This also tends to come with sleep disturbances or a change in sleep schedule due to late nights, as well as a decrease in ability to meet one’s responsibilities, including in school, at work, or with family. Grooming and hygiene maintenance may even fall to the wayside.

It can also be helpful to look out for withdrawal symptoms, which can appear after a night of drug bingeing. The longer a person has been taking GHB on a regular basis, the worse these symptoms tend to be when they no longer have access to the drug. They can even become dangerous, especially when it comes to the psychological symptoms.

These symptoms can last 2-21 days. Severe GHB withdrawal can take on the appearance of either alcohol or benzodiazepine withdrawal syndromes – both of which can be deadly. However, this level of intensity with GHB withdrawal is rare. Still, if delirium or hallucinations appear, it’s highly recommended to bring the individual to the hospital immediately or call for an ambulance.

Potential for overdose is possible and can be heightened by mixture with other drugs and/or alcohol. Signs of overdose on GHB may include:

Seek medical attention immediately if you believe you or someone you love may be experiencing an overdose.

Research on GHB addiction is lacking, and addiction is thought to be rare due to the fact that it’s typically only used on occasion.

It’s not as commonly used as drugs that produce similar effects like alcohol and ecstasy. However, there are case reports of people feeling addicted to the drug and experiencing intense withdrawal symptoms, especially among those who try to use it as a daily sleep aid or abuse their prescription.

Any suspected GHB dependence should be taken very seriously as the unpredictable nature of the substance can easily lead to overdose. According to the Health Research Fund, there have been 72 deaths associated with the drug in the US since 1990. However, experts have suggested that numbers may be much higher due to the fact that deaths involving GHB may be underreported.

When it comes to psychological addiction, which is characterized as a general need for the drug or behavior and emotional disturbances resulting from a lack of access, just about any intoxicant can be considered addictive. Even if GHB isn’t as addictive as other drugs, the euphoric sensation that many people experience can create a dependence as individuals crave the good feelings associated with its use. Psychological addiction like this often occurs because the afflicted persons have limited joy in their lives. This could be due to life stress, mental illness, poverty, and other situations that are strongly linked to addiction disorders.

There are no medications dedicated specifically to treating GHB addiction, but in the case of co-occurring mental illnesses, treating these issues often helps to reduce the need for a drug. Any addiction treatment program for GHB should be integrated with individual or group therapy, mixed with nonaddictive medications as needed, to reduce anxiety and depression. Sometimes, selective serotonin reuptake inhibitors (SSRIs) are used for this purpose. The mix of medication and therapy tends to be most effective for treating mood disorders. Cognitive Behavioral Therapy and its variants in particular can help an individual control impulsive behaviors and destructive thoughts, and replace them with healthier ones.

After the initial process of getting through withdrawal symptoms and rehabilitating, which can take place in an inpatient or outpatient program, it’s a good idea to attend support group meetings on a long-term basis.

General life changes can also help. In order to avoid temptation, individuals in recovery from GHB abuse should avoid nightclubs, raves, and similar environments in which drugs like GHB are likely to be available. Reducing stress and introducing new activities into one’s life can help to create joy apart from drug use and help a person to manage ongoing cravings.

Last Updated on March 2, 2022
Share
Editorial Staff
The editorial staff of American Addiction Centers is made up of credentialed clinical reviewers with hands-on experience in or expert knowledge of addiction treatment.
Related Topics
Related Tags
club drugs
Don’t wait. Call us now.
Our admissions navigators are available to help 24/7 to discuss treatment.
Why call us?
Get addiction help now (24/7 helpline)We’re here for you every step of the way.