Effects of Substance Abuse on the Renal System (Kidneys) 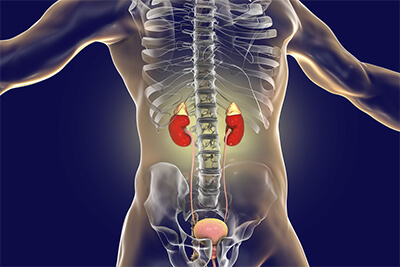 **The information in this article is designed for educational purposes and should not be used for diagnostic purposes. If anyone believes they have a problem with the functioning of their kidneys or a substance use disorder, they should contact a licensed medical professional. For substance abuse rehabilitation please call our toll free number at

Excretion refers to the process of the body eliminating toxins or waste products. The excretory system consists of numerous organs in the body that all contribute to the removal of waste products and toxins. The major parts of the excretory system include the sweat glands, the liver, the lungs, and the renal system or kidneys. This article will focus on substance abuse and renal functioning (kidney functioning).

The Function of the Kidneys

Urine is composed primarily of excess fluid, waste products, and toxins. After it is formed in the kidneys, it is then transferred to the bladder where it is stored until it is excreted. The kidneys and the bladder work together to stabilize the amount of electrolytes in the blood and prevent fluid and waste buildup in the system. Thus, the majority of the drugs that individuals take are eventually excreted through this process.

The kidneys can be affected by numerous factors that can influence their ability to expel waste products. These include:

Chronic abuse of drugs or alcohol can lead to severe kidney damage and even to kidney failure. Substance abuse may directly damage the kidneys or may indirectly damage them through some other process, such as increased body temperature or rhabdomyolysis (the breakdown of muscle tissue in the release of cells in the bloodstream).

Numerous drugs of abuse can affect the function of the kidneys.

Chronic heavy use of alcohol can lead to direct damage to the renal system, as the chronic use of alcohol can directly damage nearly every organ in the body. Such use can significantly alter the structure and function of the kidneys.

Alcohol use also affects the liver and how the liver and kidneys work together. Damage to the liver can affect kidney functioning. Even moderate to mild alcohol consumption will affect any existing condition of the liver, which will indirectly result in kidney damage.

It is well documented that chronic heavy consumption of alcohol can result in liver disease. Because the liver and kidneys work together, the effects of liver disease can extend to the renal system. For instance, it is not uncommon for individuals who have cirrhosis of the liver to also have enlarged kidneys. Individuals with liver damage as a result of cirrhosis of the liver are also at a higher risk for acute kidney failure and issues with electrolyte and sodium imbalances that can also lead to kidney damage.

Cocaine is a central nervous system stimulant that has been demonstrated to have significant detrimental effects on kidney functioning. Cocaine use, particularly heavy and chronic use, can lead to a condition known as rhabdomyolysis where muscle tissue breaks down and enters the bloodstream. This condition can lead to kidney failure.

Nearly one-third of individuals who are admitted to emergency rooms with cocaine-related issues will also develop acute kidney failure. Cocaine can also lead to renal infarctions (dead tissue on the kidneys), and chronic use is associated with cardiovascular issues, such as atherosclerosis in the walls of the renal arteries (the buildup of plaque). This can also lead to kidney damage, disruptions in kidney functioning, and issues with abdominal pain, nausea, and vomiting.

Ecstasy (MDMA) is a synthetic drug that is classified as a dissociative hallucinogenic drug. It produces hallucinations and feelings of leaving one’s body or being out of touch with reality. The drug has numerous side effects that can lead to issues with renal functioning, including its ability to increase body temperature (produce hyperthermia), which can lead to dehydration. This can result in rhabdomyolysis and acute renal failure.

The drug can also exacerbate hypertension, and this can lead to acute renal failure or damage to the kidneys.

Household items, such as spray paint, cleaning fluids, and glues, are often used as inhalants by individuals attempting to achieve the psychoactive effects associated with these substances. A toxic chemical known as toluene, which is a component of many substances used as solvents or glues that are abused as inhalants, can lead to direct kidney damage when ingested. The damage will often occur as the result of lesions to the kidney. It may also produce a serious condition known as renal tubular acidosis in which acid builds up in the blood and can lead to chronic kidney failure.

Opiate drugs consist of numerous pain-relieving (analgesic) prescription drugs and several drugs that are illicit, such as heroin. These are high-profile drugs of abuse in the United States, and their abuse is associated with numerous health issues.

The drugs can be taken orally, ground up and mixed with liquid and injected, and even snorted. There is a significant risk associated with injecting any type of drug when individuals share needles and may contact a blood-borne virus. Opiate abusers who inject drugs are at a high risk to share needles and may contract HIV-associated nephropathy, which is a kidney disease that often affects individuals who are intravenous drug users and have HIV. This condition may progress to end-stage kidney failure and death.

In addition to the risks associated with injecting drugs, the use of opiate drugs can result in kidney damage through numerous mechanisms.

Nicotine contained in tobacco products is a toxic substance, and it can be toxic to the kidneys. Use of nicotine increases blood pressure, and this increase can accelerate damage to the kidneys. Nicotine also exacerbates kidney disease and increases the risk of kidney failure in individuals who have certain medical conditions such as type I diabetes.

Smoking is associated with many complications that can affect kidney functioning, including:

Find Substance Abuse Treatment Near Me