How Long Does It Take to Reverse Alcohol Damage?

What Happens When You Drink Alcohol Everyday? 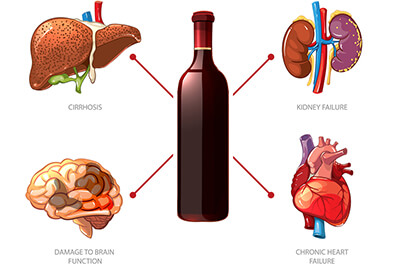 According to the Substance Abuse and Mental Health Services Administration (SAMHSA), the most frequently occurring substance use disorder is alcohol use disorder. Long-term use or abuse of alcohol has been empirically demonstrated to be associated with many different types of negative health issues and damage to numerous organ systems in the body. Volumes of studies and numerous books are devoted to investigating these effects and any attempt to list all of the potential negative effects associated with alcohol use/abuse would require a volume of works. Some of the major areas affected by alcohol abuse and how some of this damage is resolved once an individual stops drinking are discussed in this article.

The Brain and Alcohol Consumption

There is extensive research that has investigated the effects of alcohol use on the brain from the cellular level all the way up to its effects on major areas of the brain and various neural networks. Chronic use and abuse of alcohol:

The National Institutes of Health (NIH) reports that former abusers who abstain from alcohol for several months to a year may experience partial correction of some of these structural changes. The effects of abstinence from alcohol typically peak and are maintained after 5-7 years of complete abstinence, although the most salient effects occur within the first year. However, any further damage due to alcohol abuse is also negated if one stops drinking. Nonetheless, many of the changes that have occurred in the brain are not completely remitted.

The determination of how much physiological and functional impairment someone who has abused alcohol will continue to experience is dependent on:

One condition that is often attributed to individuals who drink alcohol excessively is Wernicke-Korsakoff syndrome where individuals have issues with walking, nystagmus, and cognitive problems that include severe confusion and dense amnesia. This condition is not directly related to the use of alcohol but represents a chronic lack of proper nutrition in those who neglect their diet due to severe alcohol use. The condition has been associated with a lack of thiamine (vitamin B1); if it is recognized early enough, it may be reversed through diet and supplementation. However, if the condition represents a chronic situation, the condition may not resolve even with the use of megavitamin supplementation.

Some of the potential cardiovascular issues associated with using alcohol include:

The same factors associated with recovery from neurological damage as a result of abstaining from alcohol apply to recovery from cardiovascular issues when one chooses to abstain from alcohol. However, in most cases, the full extent of the damage produced by chronic and heavy alcohol use on the cardiovascular system is not fully resolved. Typically, any reversal of damage occurs rapidly in the first months to the first year of abstinence and then slows down following that. Individuals need to also pay attention to other lifestyle factors, such as diet, exercise, getting plenty of rest, stress management, etc., in order to experience their full potential of recovery.

Alcohol Use and The Liver

It has long been observed that excessive use of alcohol affects the liver. The liver is the major organ in the body that is responsible for eliminating waste products and other toxic substances from the system. When an individual drinks excessive amounts of alcohol, the person’s liver begins to metabolize the alcohol in order to rid the toxin from the body. Alcohol is metabolized before other substances, and the liver needs to work excessively hard to perform its functions when a person drinks large amounts of alcohol.

When the liver becomes overworked, it loses its efficiency, and damage occurs that produces scar tissue and fatty deposits in the organ. If enough scar tissue develops, the liver cannot work properly, and the person is in serious danger.

Inflammation that occurs in the gastrointestinal tract, particularly in the lining of the stomach, is known as gastritis. Alcohol use is associated with the development of gastritis, and if this inflammation continues for extended periods of time, abscesses and other damage may occur as a result. This is due to excessive stomach acids that build up in the gastrointestinal tract.

When this damage becomes chronic, the individual develops ulcers. Ulcers can be very uncomfortable, and if not treated, they can create a life-threatening condition. Unless they are extremely serious, gastritis and ulcers can be reversed through treatment and abstinence from alcohol, although there will most likely be some scar tissue remaining in the individual’s gastrointestinal tract.

Osteoporosis occurs when a person’s bones decrease in density and become more brittle and prone to breaking. Although the disorder is most often diagnosed in elderly individuals, it can occur in younger individuals as well. Women are at a higher risk to develop osteoporosis than men, but both men and women can develop the disorder.

Excessive use of alcohol interferes with calcium metabolism and absorption, and this is a risk factor associated with the development of osteoporosis. Alcohol also interferes with hormone production that can lead to elevated levels of cortisol that can deplete levels of calcium in an individual’s system.

What are the Psychological Effects of Alcohol?

According to the American Psychiatric Association (APA), abuse of alcohol is strongly associated with a co-occurring diagnosis of another mental health disorder. Whether or not this association is causal, such that drinking alcohol causes an individual to develop other psychological issues or having some other psychological issue causes a person to drink alcohol excessively, is strongly debated. As it turns out, both of these explanations are likely.

Nonetheless, individuals with any form of mental illness can increase the effectiveness of their recovery by refraining from alcohol use, and individuals with alcohol use disorders can enhance their recovery by getting treatment for any co-occurring issues with depression, bipolar disorder, stress, etc. Recovery from any mental health disorder is significantly enhanced if an individual does not drink alcohol. The rate and quality of recovery from a mental health disorder depends on a number of factors, including the person’s motivation, their engagement in treatment, their social support, etc.

Sources such as NIH and APA also consistently report that excessive use of alcohol is associated with numerous social issues and problems with one’s career or education. When an individual’s use of alcohol begins to affect areas of their social, educational, and occupational functioning, it is strongly advised that the person stop drinking. Some of the damage that occurs in these areas as a result of a person’s alcohol abuse may never be completely resolved (e.g., such as individuals who get divorced, become estranged from family, lose their job, etc.); however, individuals who are dedicated to improving themselves can go on to improve their functioning in these areas, develop new contacts, and learn to live productive lives.

In the same way, some of the emotional damage that occurs as a result of the dissolution of a marriage, lost contact with family, loss of a job etc., may never be fully resolved; however, individuals in solid recovery programs learn to move forward and accept the past. The length of time that it takes to address or correct this type of damage varies from person to person and from situation to situation.

Alcohol abuse is associated with numerous health issues, emotional problems, social problems, and psychological issues. In some cases, if an individual can abstain from drinking alcohol, a significant amount of the damage that has occurred may resolve; however, in other instances, significant damage may remain. It is safe to assume that individuals who have a history of alcohol abuse also have to learn to cope with numerous alcohol-related physical, emotional, and social issues for a significant length of time even if they abstain from drinking alcohol. Getting involved in a strong recovery program and adhering to treatment can help individuals realize the full extent of their potential in recovery from alcohol abuse.