The American Psychological Association offers this formal definition of psychotherapy:

“Psychotherapy is the informed and intentional application of clinical methods and interpersonal stances derived from established psychological principles for the purpose of assisting people to modify their behaviors, cognitions, emotions, and/or other personal characteristics in directions that the participants deem desirable.”

Essentially what this means is that of psychotherapy involves the use of psychological principles applied by an individual who is formally trained in the use of these principles to assist others in modifying their behavior or thinking, or in dealing with their emotions or with other significant events/issues.

References to using various types of talking cures  have been found as far back as ancient Greece. English psychiatrist Walter Cooper Dendy introduced the term psycho-threpeia in the 1850s to describe a type of talking treatment. The person that is generally acknowledged as the founder of modern psychotherapy (just referred to as therapy in this article) is Sigmund Freud. Freud developed psychoanalysis around the beginning of the 20th century, and following his work, many other schools of therapy were formed.

What Is Group Therapy?

Group therapy is generally acknowledged as beginning when the physician J. H. Pratt began group sessions to instruct individuals in the care of tuberculosis. Pratt found that the groups benefited the members emotionally due to supporting one another in shared experiences. Pratt eventually began referring to his sessions as group psychotherapy. Group psychotherapy began to increase in popularity following World War II when groups of combat veterans were treated together, and specific benefits from these group sessions were observed.

What Is Individual Therapy?

Individual therapy consists of a therapeutic situation where one individual (termed the client for purposes of this article) is involved in the therapeutic process with at least one therapist.  A therapist can be anyone professionally trained in the use of therapy, including a psychologist, social worker, counselor, psychiatrist, marriage and family counselor, etc. For the purposes of this article, we will define the therapist as someone who has received formal training in therapy and is licensed by the state they practice to do therapy. Thus, therapy differs from getting advice from friends, family, acquaintances, etc., as it is a professional service provided by a trained professional.

A couple of relative disadvantages of individual therapy include: 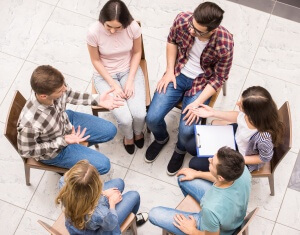 Group therapy is loosely defined as having more than one client treated at the same time by at least one therapist. Some groups will have more than one therapist; if this is the case, most often, there are two therapists addressing the group at the same time and very  rarely more than that. Group sizes can vary depending on the type of group therapy being employed. For example, couples therapy, a type of group therapy that typically treats romantic partners, consists of two clients (most often), whereas certain types of groups, such as substance abuse groups, may feature 10-12 clients in a session. Researchers who study the effectiveness of group therapy generally recommend that the ideal maximum number of clients in a group is somewhere between 6 and 12; however, some groups have even larger numbers of clients in them.

There are a number of advantages to being involved in group therapy. However, it is important to note that many of these advantages represent actual strengths of the group process as opposed to trying to make and evaluate a comparison that group therapy is better than individual therapy.

Some of the advantages that occur in group therapy include:

Several disadvantages to group therapy are:

Sometimes, certain alliances form in groups, and these subgroups target and denigrate other group members. An experienced and competent therapist is able to avoid such alliances that are detrimental to the overall group; however, it is inevitable that certain individuals in the group will identify more strongly with one another and not identify with other members.

The answer to the question, “Which is better: group or individual therapy?” is actually relatively straightforward: “Neither.” Both have advantages and disadvantages that are suited for specific types of individuals and for specific problems.

In general, the research finds that both group therapy and individual therapy are relatively equivalent in their effectiveness in addressing a large number of issues. Thus, there is no real answer to the question of which is better.

This is an individual choice that can be made by clients who are able to try both types of therapy and decide for themselves which is best for them.

The best-case scenario is to try and get involved in both types of therapy at the same time. Unfortunately, this can be relatively expensive and time-consuming for some individuals.

Nonetheless, both formats of therapy have advantages and disadvantages. Deciding on which one to engage in is a personal choice that depends on one’s personal issues, goals, and the types of therapists/groups that are available.