The Possible Ramifications of Drug Abuse on the Skeletal System 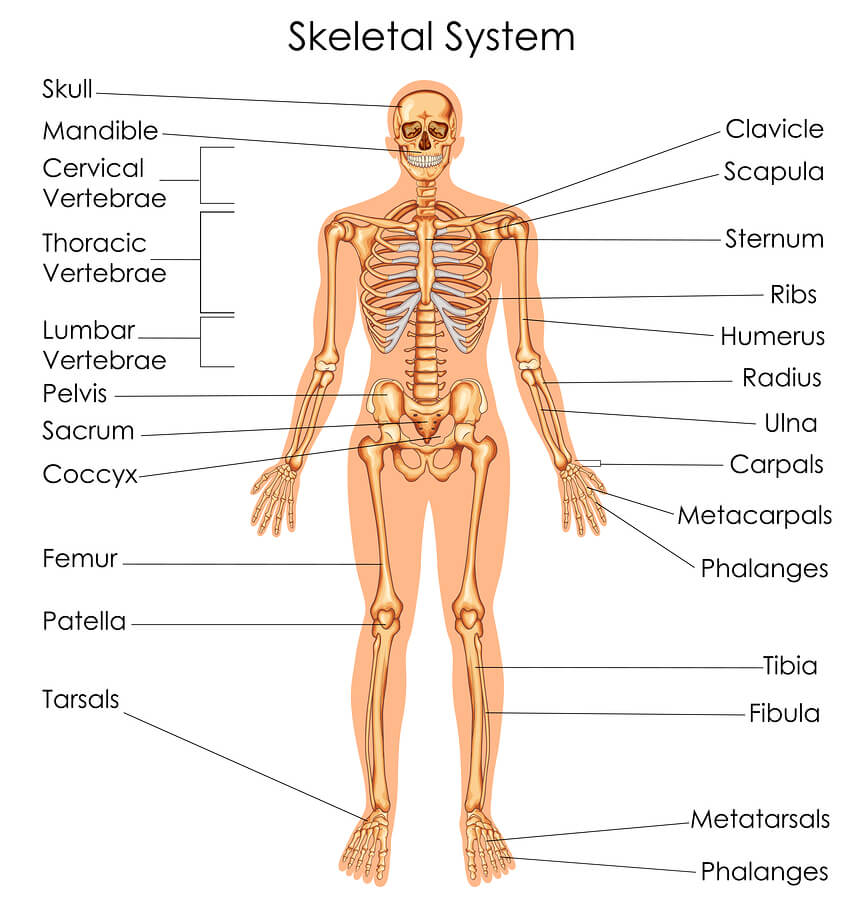 The relationships described here are correlational relationships or associations that have been derived from observational research. Actual cause-and-effect relationships regarding the abuse of drugs and the integrity of the human skeletal system are hard to determine.

Instead, the disorders listed in this article are most likely due to a combination of genetics and experience. The abuse of drugs or alcohol may contribute to the conditions listed in this article and may actually be believed to have caused them in some cases, although these types of cause-and-effect relationships can never be fully substantiated. For drug abuse programs please call our toll free number, every American Addiction Center facility provides its own combination of proven therapies and services to meet your needs.

The human skeletal system contains of 206 bones and a very intricate and extensive network of tendons, ligaments, and cartilage that connect the bones to one another, to muscle tissue, and to other types of tissue. All of the bones and the related tissues in the body are actually complex living organisms that are made up of cells that work together to perform their function.

The reasons for this relationship are not well understood, but it has been hypothesized that the individuals with chronic substance use disorders often do not pay attention to their self-care and diet, which could contribute to the loss of bone density. It has also been hypothesized that the effects of some drugs may directly affect the skeletal system, resulting in a decrease in bone density.

Skeletal Conditions That May Be Affected by Substance Abuse

There are several types of conditions that may be exacerbated by a history of substance abuse and, in some cases, may be caused by chronic substance abuse; again, cause-and-effect relationships are not well demonstrated in research studies. These conditions include:

Arthritis refers to numerous medical conditions that lead to pain in the joints or bones. There are many potential causes of arthritis. The Arthritis Foundation reports over 100 different types of arthritis. Arthritis may be the result of degenerative bone disease, wear and tear, autoimmune issues, and numerous other potential causes. The Centers for Disease Control and Prevention (CDC) estimates that over 50 million American adults and almost 300,000 children are affected with some form of arthritis.

Most people who develop some form of arthritis have inflammation in their joints, and this inflammation is often the result of numerous causes. Abuse of drugs or alcohol could increase the risk of developing many of the different types of arthritis due to issues with getting proper nutrition, being involved in accidents where joints or bones are injured, and increasing the risk for autoimmune conditions where the individual’s own immune system attacks its own tissues.

For instance, osteoarthritis, the most common form of arthritis, is believed to be at least in part due to vitamin and mineral deficiencies that reduce the body’s ability to repair itself. When individuals experience wear and tear in their joints, a lack of proper nutrition means the body is not capable of addressing that damage as it should, and this can facilitate the development of osteoarthritis.

Rheumatoid arthritis, which is believed to be due to an autoimmune disease, may be more common in individuals with chronic substance abuse issues. In many of these arthritic disorders, the joints become deformed and may need to be replaced, or the person may need significant assistance to be able to move.

Osteoporosis is a result of a loss of calcium in the bones, so the bones become thinner and may even become brittle in some cases. As mentioned above, the relationship between bone density loss and substance abuse appears to be well researched. This could be due to the dietary habits of substance abusers or the actions of some drugs themselves (or both).

For instance, alcohol abuse may lead to difficulties with the absorption of calcium and other minerals. Drug abuse may interfere with the functions of other organs like the pancreas that could lead to depletions of minerals and calcium. For women, chronic abuse of alcohol and drugs may decrease their estrogen levels, which are vital for regeneration of the bones.

Tooth decay is not uncommon among chronic drug abusers. Abusers of very powerful stimulant drugs like methamphetamine and cocaine often develop significant problems with their dentition due to the toxic effects of these drugs.

Snorting or smoking these drugs often leads to the drugs coming in contact with the person’s teeth (through the nasal cavities in the case of snorting the drug), and the acidic effects of the drugs can rapidly affect the integrity of the teeth. In addition, poor self-care habits as a result of chronic drug abuse can lead to advanced problems with tooth decay. When drugs affect the absorption of calcium into the system either due to their mechanism of action or due to poor dietary habits, this can also affect the teeth.

Drug Abuse and the Spine

Over time, the effects of drug use on a person’s posture can affect the spinal cord by weakening the supporting muscles in the spine and increasing the risk for damage to the spine due to stress. When drug abuse, poor postural habits, and nutritional issues that reduce calcium absorption are combined, effects are compounded. This may result in significant issues with the spine, including the development of arthritis or other types of spinal damage.

The effect of substance abuse on the skeletal system most likely represents the interaction of numerous conditions that can include nutritional issues, the effects of the drugs themselves, problems with posture, and even injuries to certain areas of the body as a result of being intoxicated or going through withdrawal. Arthritic conditions can be exacerbated by these interactions, and the development of any of the above conditions could be facilitated by these interactions. When investigating cause-and-effect relationships where there are many different variables, it is most often discovered that the interactions of numerous factors produce specific outcomes.