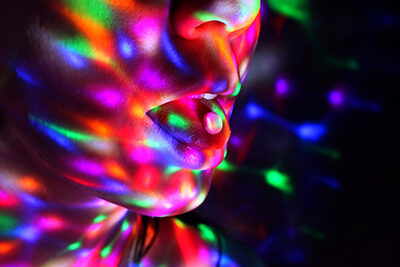 The drug was initially used in the treatment of certain types of psychological disorders (e.g., PTSD) due to its calming effects on an individual’s social behaviors; however, due to a number of potential issues with the drug, it was discontinued for this purpose, even though studies still continue to investigate its medicinal utility. The drug became a popular “rave” or club drug in the late 1980s to early 2000s; however, its use has declined significantly.

The United States Drug Enforcement Administration (DEA) currently classifies all forms of MDMA as Schedule I controlled substances, indicating that these substances are not legally available except with special permissions from the government, and the drug is considered to be a drug with an extremely high potential for abuse and the development of physical dependence.

MDMA is frequently referred to as: Molly, E, XTC, and X.

The Addictive Potential of MDMA (Ecstasy)

Secondly, a number of individuals develop physical dependence on drugs that they need to take for medicinal purposes, such as those with chronic arthritis who need to take powerful narcotic pain medications in order to control their pain. As long as individuals continue to take the medication according to the prescribed purposes of the drug and are using it for medicinal purposes, they would not be diagnosed with a substance use disorder. The notion of a substance use disorder requires that an individual uses the drug for non-medicinal reasons, and this use results in negative consequences, including issues with functioning, significant distress, and problems with controlling use of the substance.

Several sources, such as the National Institute on Drug Abuse (NIDA), report that chronic use of MDMA may lead to the development of physical dependence. However, a number of other professional sources and research studies suggest that while tolerance for ecstasy does most likely develop, chronic use of the drug does not result in a significant withdrawal syndrome. Without a significant withdrawal syndrome that is formally recognized, it is questionable whether or not an individual can develop physical dependence on ecstasy.

Any withdrawal symptoms that occur from chronic use of ecstasy are most likely primarily psychological in nature. This is because chronic use results in a massive release of the neurotransmitters dopamine, serotonin, and norepinephrine in the brain, and when the individual stops using the drug, the levels of these neurotransmitters are drastically depleted. This results in feelings of severe depression, apathy, malaise, hopelessness, and even suicidal behaviors. Some clinical and research sources suggest that these emotional and psychological symptoms are not consistent with a syndrome of physical dependence; however, this designation in no way is meant to minimize the potential issues associated with individuals who experience an “ecstasy crash” once they stop taking the drug.

Thus, the research suggests that there is no formal withdrawal syndrome recognized with discontinuation of ecstasy; however, discontinuation of the drug is often associated with a number of very distressing psychological and emotional symptoms that often drive individuals to seek out the drug to reduce the emotional stress. Whether or not these symptoms qualify as a formal withdrawal syndrome, and whether or not chronic use of ecstasy results in a formal syndrome of physical dependence, does not have any bearing on the need for individuals to seek professional help if they have abused MDMA on a regular basis for significant period of time.

The Development of Addiction as a Result of Ecstasy Abuse

The other important consideration regarding whether ecstasy is addictive concerns the development of a formal substance use disorder as a result of ecstasy abuse. Individuals who abuse any drug and develop significant issues with functioning and controlling use of the drug are at risk to be diagnosed with a substance use disorder. Substance use disorders reflect severe mental health disorders that impact an individual’s ability to objectively evaluate their own behavior, result in distress for them, and lead to significant impairments in their ability to function within reasonable limits.

Individuals who chronically use ecstasy and develop these issues would be diagnosed with a substance use disorder. According to the American Psychiatric Association (APA) and the number of other professional organizations, such as the American Society for Addiction Medicine (ASAM), an individual who has developed a severe abuse problem with ecstasy would qualify for a diagnosis of a hallucinogen use disorder. A diagnosis of a substance use disorder reflects a dysfunctional and harmful pattern of substance use that is a more realistic reflection of what the term addiction is supposed to represent.

Briefly, the symptoms of a hallucinogen use disorder as a result of the chronic use of ecstasy would include the following:

Because it is unclear if withdrawal symptoms occur as a result of chronic ecstasy abuse, a withdrawal syndrome is not specified as a specific diagnostic criteria for a hallucinogen use disorder. However, tolerance is recognized it is a formal diagnostic symptom of ecstasy abuse. Moreover, anyone who develops tolerance to a Schedule I controlled substance is obviously illegally using the substance on a regular basis, and this would raise suspicions that the individual has developed a substance use disorder.

As chronic use of ecstasy produces specific physical and emotional effects, certain behaviors that occur in individuals who use the drug may also suggest that the individual needs to be evaluated for a substance use disorder. According to NIDA, APA, and ASAM, some of these behaviors include:

Ultimately, yes, ecstasy can be addictive. While it is questionable whether individuals who abuse ecstasy develop physical dependence on the drug, repeated use of ecstasy can lead to a substance use disorder.

Editorial Staff
Author
The editorial staff of American Addiction Centers is made up of credentialed clinical reviewers with hands-on experience in or expert knowledge of ad … Read More
Read Our Editorial Policy
Related Topics
Related Tags
club drugs
ecstasy
Are you covered for addiction treatment? Find your insurance.
Check My Insurance
Do you have insurance?
Don’t wait. Call us now.
Our admissions navigators are available to help 24/7 to discuss treatment.
Get addiction help now (24/7 helpline)We’re here for you every step of the way.