Physical Effects of Heroin On the Body (Short & Long-Term Effects)

Heroin, an illicit opioid, is experiencing a resurgence in use in America, in part due to the prescription opioid abuse epidemic.

As authorities have clamped down on the distribution of pain-relieving medications, such as hydrocodone and Opana, individuals who are addicted to these medications have sought out heroin as an alternative.

The National Survey on Drug Use and Health (NSDUH) provides accurate and thorough data on the different patterns of drug abuse in America. The 2013 NSDUH surveyed heroin use and made the following findings:1 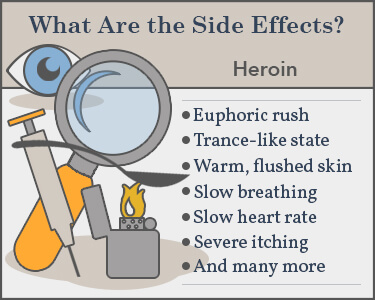 It may seem alarming that a drug as potent and potentially ruinous as heroin has been making a comeback. According to authorities and news reports, relatively easy access to street heroin and its low cost (at least compared to prescription painkillers sold on the street) make it an attractive option, despite the fact that it can lead to a host of dangerous health conditions.

It is impossible to know from appearance alone whether someone is using heroin. However, heroin use can sometimes cause changes in someone’s physical appearance. Someone who is addicted to heroin may experience weight loss. Their pupils may also present as smaller than normal, which is sometimes referred to as “pinpoint” pupils.4

Additionally, this person may become less concerned with their physical appearance and hygiene, or appear more disheveled, but this is not always the case.5 Someone who injects heroin may have scars on their body to indicate injection, such as on their arms or legs. In severe cases, these injection sites may become infected or cause abscesses to form.6

Severe Effects of Heroin Use

The health hazards associated with heroin stem from the drug itself and the circumstances around its use. Chronic heroin users who share unsterilized heroin paraphernalia can develop a host of long-term health consequences, such as:7,8,9

In addition to chronic conditions and infectious diseases, as the National Institute on Drug Abuse explains, ongoing heroin use can cause changes to the brain.5

Research further shows that heroin abuse can lead to a deterioration of the white matter in the brain, which can directly affect decision-making capabilities, the ability to control behavior, and methods of responding to stress. Changes to the brain can also predispose it to a greater likelihood of relapse. Research shows that even after achieving sobriety, a person with a history of heroin abuse may be more likely to take up heroin again than those who do not have a history of such abuse.

Heroin abuse among women has been linked to infertility and disruptions to menstrual cycles. In some cases, pregnant women who use heroin have experienced spontaneous miscarriages.6 Women who continue their pregnancies may give birth prematurely, and infants may have a low birth weight and/or be born addicted to heroin. Regarding sexual function, women and men may experience diminished sexual drives. Men may experience erectile dysfunction and the inability to regain sexual interest on a long-term basis.

According to data collected by the Centers for Disease Control and Prevention (CDC), the number of fatal heroin overdoses has gone up over the years:10

In the 1960s and 1970s heroin use in America reached epidemic heights. As a result, there was considerable public education about the many hazards associated with this potent opiate. Still today, there is a general public awareness about the harrowing effects of heroin. However, the number of 2013 heroin overdose fatalities was at an all-time high for the decade.

A heroin overdose does not always lead to fatality. In order to prevent fatality, it is critical to know the symptoms of a heroin overdose, which include:

Signs of a heroin overdose and any severely adverse reactions to this opioid require emergency medical services. According to the National Institute on Drug Abuse, in 2009, there were an estimated 213,118 reported emergency department visits related to heroin use. Fortunately, when compared to the heroin overdose rate for 2009 (more than 3,000 people), it is clear that only a fraction of the individuals who seek emergency treatment will suffer a fatal overdose. There does not appear to be data available on the number of people who fatally overdose on heroin without seeking emergency care.

All heroin use is illicit. Heroin use, therefore, always involves a criminal element.

Exposure to drug dealers and other addicted individuals renders a person vulnerable to arrest, fights, and other legal trouble. As heroin is illegal under both federal and state laws, apprehended individuals involved with heroin (manufacturing, sale, and possession) may face criminal sanctions. There are many ways in which heroin use can lead to prison.

Heroin use can also result in driving under the influence (DUI) or “drugged driving.” According to the National Highway Traffic Safety Administration (NHTSA), individuals who drive while under the influence of heroin exhibit slow driving, diminished vehicle control, weaving in the road, delayed reaction times, an inability to follow road signs, and may even fall asleep at the wheel.

According to one NHTSA study, in 2009, 18 percent of drivers who died in an accident were found to have at least one drug in their system.11

As aggression can be a side effect of heroin, a person who abuses this drug may become violent toward strangers and intimate partners alike. In some cases, the assault may be sexual in nature. Children are also vulnerable to heroin-involved domestic abuse. The victims of heroin assaults are not limited to the individuals on the receiving end. When people who use heroin attain sobriety, they will invariably recognize how heroin abuse caused them to damage relationships with people important to them, such as intimate partners and children. These losses can lead to stress and depression.

A dedication to recovery and the attainment of sobriety can heal personal relationships as well as provide authorities (such as child protective services) with a reason to review a prior decision (such as the removal of children). There is always hope.

Editorial Staff
Author
The editorial staff of American Addiction Centers is made up of credentialed clinical reviewers with hands-on experience in or expert knowledge of ad … Read More
Read Our Editorial Policy
Related Topics
Related Tags
heroin
Are you covered for addiction treatment? Find your insurance.
Check My Insurance
Do you have insurance?
Don’t wait. Call us now.
Our admissions navigators are available to help 24/7 to discuss treatment.
Get addiction help now (24/7 helpline)We’re here for you every step of the way.