Overeating Among Teens and Adult Men

Authored by Editorial Staff
Last Updated: February 25, 2022
Editorial Staff
The editorial staff of American Addiction Centers is made up of credentialed clinical reviewers with hands-on experience in or expert knowledge of addiction treatment.
Related Topics

Everyone eats a little too much from time to time. The human body needs food to survive, and in theory, we would all eat even if the food had no color, no odor, and no taste.

We would need food, and we would eat it. However, food can be simply delicious. It can smell wonderful, look beautiful, and taste amazing. It is no wonder that almost everyone gives in to temptation from time to time and eats just a little too much. Sometimes, the wonder of food is really hard to resist.

But there are some people who eat too much on a regular basis. When these people start eating, they simply cannot stop. People like this can face very real consequences due to their overeating habits, and they can also face very real cultural stigma.

As Psychology Today points out, modern culture associates overeating with contempt. People who can control their behaviors and cravings are considered good and virtuous, while those who cannot do so are thought of as lazy or expendable. That is particularly true for men, as modern culture expects men to be strong, capable, and in charge at all times. Men who cannot even handle their appetites might be viewed in a negative light as a result.

That view of overeating has very little to do with reality. In fact, most teenage boys and adult men who have overeating issues are dealing with factors that are far beyond their control. Research is just beginning to bring this very complicated, and very important, issue to light.

Is It an Addiction?

The tasks associated with eating are typically handled by the mouth, throat, stomach, and intestines. But the brain has a role to play in the selection of food and the initiation of the eating process. Some of the changes the brain goes through, both before and during an overeating episode, could make overeating compulsive or addictive.

In a study of the issue, highlighted by Scientific American, researchers point out that the brain releases a pleasurable chemical (dopamine) in response to food that tastes good. That chemical release works like a bookmark, so the brain can take note of activities that feel good and therefore might be good for the body. People who eat a great deal can take in a great deal of dopamine, researchers suggest, and that could make them more likely to overeat again.

The brain is designed to react to a specific amount of dopamine, researchers say, and when it is provided with a dopamine signal that is too big, changes can result. The brain can turn off dopamine receptors, to muffle the next overeating onslaught, and that means people might eat even more during the next session. Dopamine feels good, and a rush feels wonderful. People who want that rush might need to eat more to get it.

This is the same cycle of dopamine flood and response seen in people who take drugs like heroin or OxyContin. These people also need to take in more to feel the same rush, and these people find it hard to stop taking drugs. Similarly, people with a long history of overeating might also find it hard to stop, due to the brain’s changes. These people are not making the choice to overeat. They are dealing with damaged brain cells.

This is a relatively new concept, but it is one that researchers are excited about. As one researcher writing for the American Journal on Addictions points out, thinking about overeating as an addiction, and treating it as such, could help to both prevent and treat obesity. It could help people to gain a new understanding, and that could help them to stay healthier.

Addiction models are not the only models researchers use in order to understand and explain overeating in men and teenage boys.

There are other parts of a man’s mind and his history that could influence his behavior at the table.

Is It Caused by Obesity? 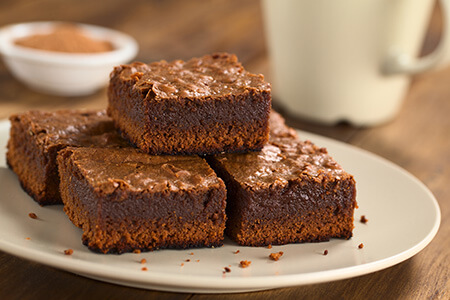 It is easy to understand how overeating on a regular basis could help to boost a person’s size. The body needs only a certain amount of calories every day in order to handle its work, and when the person takes in too many calories, they are stored in the body, and they contribute to changes in size. Researchers now think that those changes in size could actually prompt people to continue to overeat.In one study of 124 people, published in the journal Appetite, researchers asked people to rank their cravings for specific types of food, and answer questions about the way in which they ate. Men who were considered overweight had a higher craving for foods laden with fat, when compared to men who were not overweight. This seems to suggest that something about the men’s overall shape or size had an impact on the types of foods they wanted to eat.This study is small, so it is not wise to make overarching statements about what the research means. More work must be done before that connection becomes clear. But it seems at least possible that people who are on the top end of the spectrum of size might be prompted to eat more, and more foods high in fat, than people who are a little smaller. They have bigger cravings, so those urges might be harder to control.In a similar path of research, published in the journal Pediatrics, researchers examined the impact of starchy foods. These foods, researchers said, tend to cause hormonal changes within the body. When people eat starches, the body has to go through a great deal of chemical work in order to keep blood sugar levels in check.

But people who eat many of these foods may find that they are simply hungry within an hour or two of a meal, due to the speed with which the body has to process that food.

Researchers in this study seem to suggest that this is a particular problem for obese people, and it could stand behind overeating. People like this eat starchy foods, and they feel hungry very quickly, so they eat again. The organ damage and the body’s processing are to blame.

Is It Caused by Something Else Altogether?

While addiction and/or obesity could stand behind an overeating issue, there are other avenues of interest to researchers. For example, some researchers think that people of specific personality types are more likely to overeat.In a study of the issue in Appetite, researchers split people into two groups. One group had what researchers called a high negative affect, and the others had a low negative affect. People with a negative affect typically experience negative emotions, including:

A binge takes hold when a man eats a great deal of food in one sitting, and during that episode, he might feel completely cut off from the act of eating. He might not be aware of eating at all, as he’s dropped into a trance-like state during the meal. Or he might be aware that he has started to eat, but unaware of how to stop.

These are signs of binge eating disorder (BED), and it is much different than an overeating issue. Men with BED have a psychiatric trigger that stands behind the binge, and they may not be able to control the behavior with simple tips. Men like this need psychiatric help in order to address the trauma that stands behind the binge, and then they’ll gain the control they seek. That is something they will find in BED treatment program.

Last Updated on February 25, 2022
Share
Editorial Staff
The editorial staff of American Addiction Centers is made up of credentialed clinical reviewers with hands-on experience in or expert knowledge of addiction treatment.
Related Topics
Don’t wait. Call us now.
Our admissions navigators are available to help 24/7 to discuss treatment.
Why call us?
Get addiction help now (24/7 helpline)We’re here for you every step of the way.