Dangers of Mixing Methadone and Heroin

Heroin was one of the first painkillers derived from morphine in the 19th century. It was created to be less addictive than morphine but was found to be more addictive, and heroin has been a Schedule I drug, according to the Drug Enforcement Administration, for decades. 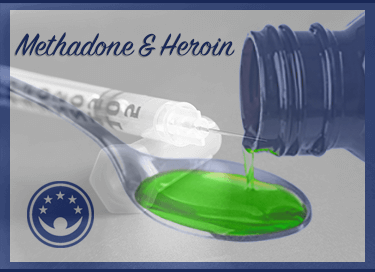 Unfortunately, many people struggle with heroin addiction. Starting with changes to prescribing practices in 1999, when other prescription narcotics were made widely available to treat moderate and severe pain, more people began struggling with addiction to heroin and other opioid drugs. The Centers for Disease Control and Prevention notes that between 2000 and 2013, the rate of heroin overdose deaths quadrupled, and over 8,200 people died in 2013 alone due to heroin overdose.

Methadone was also developed as a less addictive prescription painkiller in the 1930s; however, the long half-life of the opioid analgesic made it a potentially beneficial treatment to ease people off heroin addiction. This became the drug’s primary prescription use starting in the 1960s in the United States, although in the past decade, it has been reintroduced as a less expensive generic prescription painkiller, typically for people with little income or who are on Medicaid or Medicare.

Unfortunately, this change in prescribing patterns has led to an increase in methadone overdoses, related deaths, and diversion for nonmedical use.

Heroin has a very short half-life, while methadone has a long half-life. The point of treating heroin addiction with methadone maintenance is to allow the person to have an opioid drug binding to the opioid receptors in their brain, so they do not experience withdrawal symptoms and cravings. They also do not have to take the drug as often, since methadone can remain bound to brain receptors for days, depending on the dose. Methadone is also a potent narcotic drug, and it can induce a high just like heroin can, although the effects last much longer.

In some cases, people combine methadone and heroin. There are a number of reasons people mix these two drugs, and it is becoming a more common occurrence, causing serious health issues.

The Dangerous Combination of Methadone and Heroin

Theoretically, methadone’s presence in the body will prevent heroin and other opioid drugs from binding to the opioid receptors in the brain. A person who takes heroin while on methadone should not feel the effects of heroin.

For people who have long struggled with addiction to heroin, one of the toughest problems to overcome is the habit of ingesting the drug. People primarily inject the drug into a vein, although some people smoke it, and some may snort it. Regardless, the drug hits the brain very quickly; this means that the individual must take several doses over the course of a day to maintain their original euphoria. As the body develops a tolerance to, and dependence on, heroin, the person may ingest larger doses more often. This could be a tough habit to break even if the body does not experience any cravings while the person is taking methadone. People who take one dose of heroin while on methadone most likely won’t experience any euphoric effects, but some people may become frustrated and immediately take more heroin. This can lead to overdose, as the brain is flooded with several types and doses of opioids.

Whether a person has a prescription for methadone or acquires it illegally for recreational purposes, combining this drug with heroin could also be part of a larger pattern of substance abuse. The individual could suffer from addiction to opioid drugs, and mixing heroin and methadone may be intended to create a long-lasting, potent high. Again, this is extremely dangerous because the risk of overdose dramatically increases when sedatives like these are combined. Mixing methadone with alcohol or benzodiazepines also increases the risk of overdose, as other central nervous system depressants enhance the effects of either methadone or heroin.

What Do People Expect When They Mix Heroin and Methadone?

Since heroin is a short-acting narcotic, people could mix heroin and methadone to draw out the high and take the edge off comedown effects when heroin begins to leave the person’s body. The mixture could be intended to enhance the high from heroin by adding a second narcotic sedative; this does not create the same potent high as mixing benzodiazepines or alcohol with methadone, but it can still cause a high that can lead to overdose.

The individual could also simply relapse into heroin abuse while they are on methadone maintenance therapy, hoping for the original rush that methadone does not provide.

Risks from Mixing Methadone and Heroin

The high from heroin sets in within a few seconds or a few minutes; the experience typically peaks within 10 minutes; some reports suggest that the high from intravenous injection lasts only a few seconds. However, the side effects, including sleepiness or unconsciousness, last for a few hours after a person takes the drug.

Methadone, in contrast, has direct effects for 24 hours. During this time, it relieves withdrawal symptoms or pain, depending on how it was prescribed. However, the drug remains in the body for up to 59 hours, or 2.5 days.

Adding rapid-onset opioids like heroin on top of methadone, even after the immediate effects have worn off, can lead to overdose. The drugs may interact, causing at a minimum more intense side effects and, at worse, overdose symptoms. Symptoms of an opioid overdose, including that caused by a mix of heroin and methadone, include:

Opioid overdoses are life-threatening, and people need immediate medical attention. It is important to call 911 if a person overdoses on opioid drugs, especially a combination of methadone and heroin.

Other short-term effects from mixing heroin and methadone will look like those of other opioid drugs but may be more intense. These include:

The most serious long-term problem from mixing heroin and methadone is addiction. If a person does not experience an overdose, they could quickly develop a tolerance to this combination of drugs and then a physical dependence on them to feel normal. Cravings for the mixture and compulsively taking the combination, alongside tolerance and dependence, indicate addiction.

The person may also develop lung problems and respiration difficulties. The brain could lose white matter as the reward system changes due to addiction and cells begin to die from oxygen deprivation. Liver and kidney disease could develop as well.

A person struggling with methadone and heroin addiction together may also experience physical harm if they are in an accident while intoxicated. Broken bones, head injuries, and damage to internal organs could occur from a car crash, serious fall, or other accident.

It is extremely important to get help before an overdose occurs or before the body begins to suffer serious long-term damage from this type of polydrug abuse. Since methadone is usually used as a form of medication maintenance, working with a doctor may involve creating a taper with methadone or switching to another medication like buprenorphine. Tapering will allow the body to slowly end its dependence on narcotics while avoiding most withdrawal symptoms.

Editorial Staff
Author
The editorial staff of American Addiction Centers is made up of credentialed clinical reviewers with hands-on experience in or expert knowledge of ad … Read More
Read Our Editorial Policy
Related Topics
Related Tags
heroin
opioid
Are you covered for addiction treatment? Find your insurance.
Check My Insurance
Do you have insurance?
Don’t wait. Call us now.
Our admissions navigators are available to help 24/7 to discuss treatment.
Get addiction help now (24/7 helpline)We’re here for you every step of the way.