Dangers of Mixing Clonidine and Alcohol

Combining prescription medications with alcohol can have serious side effects. This is especially the case if the drug used and alcohol have similar effects. One example of a medication abused along with alcohol is clonidine. 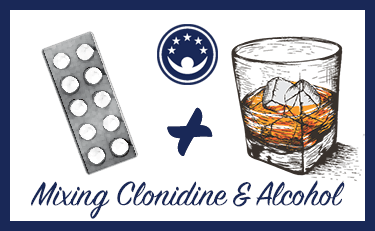 The drug classifies as a centrally acting alpha-agonist. It works on the alpha-adrenoceptors in the brainstem and, ultimately, decreases the sympathetic outflow from the central nervous system (CNS). Additionally, it lessens peripheral resistance, heart rate, blood pressure, and vascular resistance.

It’s sometimes prescribed to those who are going through withdrawal, as noted by MedlinePlus. Although it won’t reduce cravings, clonidine can treat the symptoms of opiate withdrawal, such as anxiety, runny nose, agitation, sweating, muscle aches, cramping, and sweating. In addition, it’s prescribed to people who are going through alcohol withdrawal. In fact, the National Institutes of Health published studies that indicate the positives of clonidine on people who have alcohol use disorder. Several blind studies show clonidine was superior when compared to placebos. People who suffered from alcoholism had a decrease in blood pressure and pulse. Additionally, individuals who participated in the study had improvements in terms of their composite alcohol withdrawal score. Studies have not yet analyzed if clonidine affects the likelihood of developing seizures or hallucinations.

Why Do People Use Clonidine and Alcohol Together?

People who abuse clonidine usually use it in combination with another substance because it tends to amplify the effects of alcohol or another drug. It generally increase the amount of time the “high” lasts. For example, clonidine will boost and increase how long an opioid high lasts. It will even reduce the amount of the drug needed to produce euphoria.

Alcohol and clonidine are easier to obtain than opioids and illicit drugs since alcohol is legal. Clonidine isn’t a controlled substance, and it doesn’t have much street value. Doctors are often more willing to write a prescription for clonidine because its abuse potential isn’t high.

Who Abuses Clonidine and Alcohol?

Clonidine is often abused with alcohol by people who are addicted to opiates or other substances. Clonidine isn’t a well-known drug for producing euphoria; however, the National Institutes of Health reported 14 out of 15 people suffering from opiate addiction knew of clonidine abuse. Of the 14 who knew about clonidine abuse, 10 used clonidine to reduce the amount of heroin needed to get high.

The Journal of Substance Abuse Treatment published findings from a study regarding use and abuse of clonidine in those receiving treatment from a methadone maintenance program. The study consisted of 78 applicants from three methadone treatment programs who were surveyed about their clonidine use. Twenty-two applicants admitted to taking clonidine for nonmedicinal purposes while 15 used it for its intended purpose of decreasing opioid withdrawal. These 15 individuals were also using it for its sedating effect.

The people who were prescribed it used an average dose of 0.37 mg at a time. The majority of people, however, didn’t obtain the drug through a valid prescription from a healthcare practitioner; they obtained it on the street or from friends or family. These individuals used an average of 0.6 mg per dosage. The study didn’t gather information regarding how many people drank alcohol while taking the medication. People who participated in this study were asked if they believed the drug was addictive. Of the people surveyed, approximately one-third believed it was addictive.

One study conducted on pregnant women who suffered from opiate addiction involved testing the women for clonidine. The results indicated that one-third of the women tested positive for clonidine. While urinalysis revealed that 26 of the pregnant women tested positive for the drug, only six women admitted to clonidine abuse. On average, the people who abused the prescription were 29.5 years of age, and they only received 11.3 years of formal education. The women were an average of 22.2 weeks pregnant. Eighty-three percent of the women were African American, 73 percent had never been married, and 97 percent were currently unemployed. A great deal of women who took the survey were late into their second trimester before they sought treatment.

Side Effects of Combining Clonidine and Alcohol

When people abuse clonidine and alcohol together, the combination alters the chemistry of the blood. Drastic changes in blood pressure may occur. In extreme cases, people lose consciousness. Taking clonidine with alcohol has the potential to cause a stroke, heart attack, coma, or death. In addition, it’s possible for somebody who uses these two substances together to experience seizures.

Mayo Clinic advises those who take clonidine, even as prescribed, to limit their alcohol consumption since the blood pressure medication does affect the central nervous system, and effects like drowsiness will be enhanced. Mayo Clinic states that clonidine can lead to fainting, and when mixed with alcohol, those who use clonidine are at a greater risk of fainting. Headaches are a common side effect of using the two substances together as well. Pulse and heart rate can change as a result of drinking alcohol when taking clonidine.

Those who abuse alcohol and clonidine together over a prolonged period of time can experience liver problems. Alcohol metabolizes in the liver and leads to liver damage on its own while a study revealed people who took the drug had mild transient abnormalities in liver function tests.

Clonidine has the potential to cause side effects when taken alone, and these effects can occur whether people take it as prescribed or abuse it. Per a report by the National Institutes of Health, in one study, 10 out of 100 patients reported experiencing weakness from taking clonidine; four out of 100 individuals experienced fatigue; and headaches and withdrawal symptoms occurred in one out of 100 people. Many people reported an increased sensitivity to alcohol.

Other common side effects of the medication include:

Some of the side effects of clonidine are enhanced by alcohol, such as depression, nausea, vomiting, and a decrease in sexual activity. Hypotension can occur from an overdose of clonidine alone, and then, the person may experience bradycardia, hypothermia, respiratory depression, drowsiness, weakness, miosis (pupil constriction), irritability, confusion, and a decrease in or absence of reflexes. When taken in larger dosages, dysrhythmias, apnea, and coma are possible. Generally, people who overdose on clonidine see symptoms in as little as 30 minutes to two hours; however, they may occur sooner in those who abuse the drug with alcohol since alcohol enhances its effects.

Is It Possible to Get Addicted to Alcohol and Clonidine?

Clonidine is rarely the only substance of abuse for people. In many cases, individuals become addicted to both alcohol and clonidine. Having one addiction makes people more susceptible to developing another addiction. The longer individuals abuse alcohol along with the blood pressure medication, the greater the chance of addiction.

People who suffer from a polydrug addiction involving alcohol and clonidine tend to have symptoms of withdrawal similar to those associated with alcohol withdrawal. For instance, symptoms may include anxiety, tremors, agitation, irritability, confusion, sweating, insomnia, and headaches. Symptoms of clonidine addiction without alcohol addiction include hypertension, hallucinations, nausea, and vomiting. Rapid mood changes can occur as well.

Those who become addicted to both clonidine and alcohol will need comprehensive addiction treatment to overcome the disorder. Because alcohol withdrawal can lead to seizures and even death, and clonidine withdrawal can lead to hypertension, individuals should be monitored carefully in a medical facility when quitting these substances of abuse. Generally, those coming off clonidine must be gradually weaned off the substance through a taper.

Alcohol withdrawal symptoms may be treated with medications to reduce the prevalence of seizures, and other prescription drugs may be used to control other symptoms.

While medications can play a vital role in detox and recovery, therapy is the backbone of treatment. In therapy, clients will address the underlying issues that triggered the initial substance abuse. If those underlying issues aren’t dealt with, relapse is likely.

Editorial Staff
Author
The editorial staff of American Addiction Centers is made up of credentialed clinical reviewers with hands-on experience in or expert knowledge of ad … Read More
Read Our Editorial Policy
Related Topics
Related Tags
alcohol
sedatives
Don’t wait. Call us now.
Our admissions navigators are available to help 24/7 to discuss treatment.
Why call us?
Get addiction help now (24/7 helpline)We’re here for you every step of the way.