What is Alcoholics Anonymous?

For those struggling with alcohol use disorder, or alcoholism, Alcoholics Anonymous (AA) is an international organization of peer groups meet to support each other. Members meet regularly to discuss issues and concerns related to their addiction and to support one another through triumphs and relapses. Generally, more seasoned group members “sponsor” newer members, guiding them through the process of “working the steps” to help on alcohol rehabilitation.

Does Your Insurance Cover Treatment? If the cost of rehab is preventing you from finding help, your insurance may be able to cover all or part of the cost of treatment. Find out below.

Alcoholics Anonymous uses the 12-step approach. Members complete each step on their path to recovery, often with the help of a sponsor.

Members can revisit the steps at any point. Some people work them multiple times.

Given the current isolation in the country due to COVID-19 we have launched Virtual Support Meetings to help you stay connected and a private Facebook Group; please join to be kept up to date on future meetings and to connect with those in recovery.

The group originated in 1935 when Bill Wilson and Dr. Bob Smith formed a group in Akron, Ohio, for those suffering from alcoholism.1 The concept of the group revolves around the fact that alcoholism is an illness that can’t be controlled but can be managed. Additionally, the group centers on spirituality and its impact on alcohol rehabilitation and recovery.2 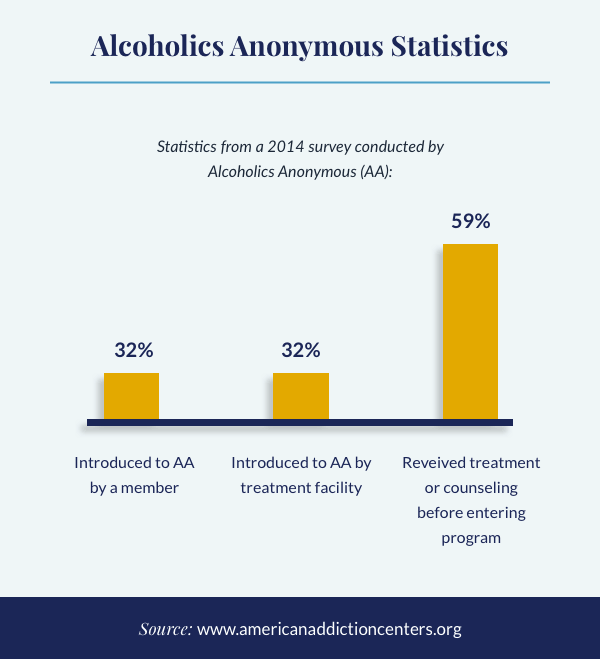 With the prevalence of alcohol abuse and addiction in the U.S. and around the world, the widespread presence of AA is not a surprise. Alcoholics Anonymous has more than 115,000 groups worldwide.5

What Is the Success Rate of Alcoholics Anonymous?

Success is a vague term to describe the prognosis of the program. Some people never relapse while others relapse and never relapse again after that initial bump in the road.

There isn’t an exact success rate available since many of the results are published by AA and vary based on several factors. Because AA is anonymous, some members of the group don’t participate in studies since it could breach the anonymity of the group. Many want their participation in AA to remain unidentified, in line with the group’s original intention. Additionally, participants might not want to admit to relapse.

Moreover, the people who attend meetings change constantly since people drop out. In fact, 40% of people drop out of AA during the first year, according to some studies.6

Although AA has been criticized by some sources for having a low success rate, the rate likely isn’t 5% like some say it is.7

The National Institute on Alcohol Abuse and Alcoholism featured results on a long-term study on AA members. The study consisted of formally treated, informally treated (AA), and untreated individuals who suffered from an alcohol problem.10

A study conducted on males from the U.S. Department of Veterans Affairs showed abstinence rates of those recovering from alcohol abuse at one year and 18 months. Approximately, 20-25% of those who didn’t attend a 12-step program, such as AA, or another aftercare program were abstinent from alcohol and drugs after one year. On the other hand, the abstinence rate was nearly twice as high for those who attended AA or another similar 12-step program without any aftercare. The results were evident that the more meetings people attended and the longer they were in the program, the greater the chances of alcohol and drug abstinence.11

Another study mentioned in the same publication observed a smaller outpatient sample. The results concluded that over 70% of those who attended a 12-step program weekly for 6 months before the two-year follow-up point were abstinent from alcohol. Another study conducted on those with an untreated drinking problem showed 70% of those with 27 weeks or more in AA were abstinent from alcohol at the 16-year follow-up mark. Moreover, the study revealed those with a shorter duration of time in AA had lower rates of abstinence.11

Those looking for a recovery support group after they’ve already sought out addiction treatment may benefit greatly from a 12-step approach. However, people should research their options and determine if a spiritual approach to recovery is ideal for their needs. An effective addiction aftercare program fits a person’s specific needs, and in some cases, a more secular approach to recovery may be preferable.

Lack of participation appears to hinder the results of the program. If people don’t adhere to the structure and attend regular meetings, they won’t receive the full benefit of the program, so it’s important that people are committed to AA to succeed.

If you or someone you love has an addiction to alcohol and it is affecting their lives, there are a variety of treatment programs available to you. Explore our rehab centers below.