Schizophrenia Among Drug and Alcohol Addicts: Treatment and Statistics

Schizophrenia is a severe neurological disorder that causes a break between the individual’s experience and the surrounding world.

Although it is often referred to as a form of mental illness, schizophrenia is more accurately defined as a group of serious neurological disorders that alter the individual’s sense of reality. The delusional beliefs, hallucinations, disorganized thoughts, and strange personality traits of schizophrenia can be frightening, both for the individual who experiences them and surrounding loved ones. Because it interferes with thought processes, behaviors, and communication, schizophrenia can leave individuals profoundly impaired in the areas of work, relationships, social interaction, and cognition. Hospitalization, unemployment, homelessness, and suicide attempts are common repercussions of this disease.

Most people who are diagnosed with schizophrenia experience the first symptoms in their teenage years. According to PLOS Medicine, approximately 15.2 persons per every 100,000 suffer from schizophrenia worldwide each year. The early onset of the disorder, combined with the persistence and severity of symptoms, make the social impact of this disease considerable, even though the prevalence is fairly low. The rate of substance abuse among these individuals is higher than in the general population, and drugs and alcohol are often used as a way to cope with the debilitating effects of the disease. Treatment for schizophrenia combined with addiction requires an intensive focus on addressing the symptoms of this serious mental illness, combined with a deep compassion and understanding of the effects of the disease.

Schizophrenia is now seen not as a single neurological condition, but rather a cluster of conditions. Several forms of the disorder have been identified, based on the individual’s dominant symptoms:

Understanding the Roots of Schizophrenia

Neurologists, psychiatrists, and biologists are still researching the origins of schizophrenia. There are several popular theories about the roots of this disease; however, many researchers agree that in any given person, schizophrenia may come from a combination of sources:

Substance abuse does not cause schizophrenia, but the chronic, excessive misuse of alcohol or drugs can increase the frequency and severity of psychotic episodes. In particular, drugs like cannabis, LSD, and other hallucinogenics have been linked with schizophrenic episodes. Stimulants like cocaine have also been implicated in the psychotic thought patterns and hallucinations of schizophrenia.

Statistics on Schizophrenia and Substance Abuse

The rate of substance abuse is 50 percent higher among individuals with schizophrenia than among the general population, according to Schizophrenia Bulletin. The journal identifies the most commonly abused legal and illegal drugs among schizophrenic patients as alcohol, nicotine, cocaine, and marijuana. Substance abuse can intensify the severity of schizophrenic symptoms, increase the number of psychotic episodes, and increase the risk of outcomes like hospitalization, incarceration, and suicide attempts.

Although schizophrenia can have a dramatic effect on an individual’s thoughts, speech, and behavior, it is not always easy to identify these effects as signs of schizophrenia, especially in people with substance use disorders. Alcohol or drug abuse can mask the symptoms of schizophrenia, and vice versa. Substance abuse and schizophrenia may have the following symptoms in common:

Alcohol and marijuana, both central nervous system depressants, can have a sedative effect on an overactive mind fraught with hallucinations or delusional beliefs. Stimulants such as cocaine, amphetamine, and methamphetamine can help the mind feel more focused, at least temporarily, and may help to sustain feelings of grandiosity and elation in high-energy phases of the disorder.

Getting Help for a Loved One 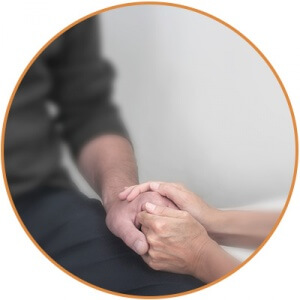 Because of the delusional beliefs, emotional blunting, and chaotic thought processes of schizophrenia, talking to a loved one about this disorder can be extremely challenging. It is important to remember that although schizophrenia is a chronic, usually lifelong disorder, its symptoms are treatable, and its negative consequences are preventable. With the right combination of medications, psychosocial services, and recovery services, people with schizophrenia can reduce their behavioral and neurological symptoms while learning how to overcome the effects of drug or alcohol abuse.

The ideal time to start a conversation with a loved one who displays signs of schizophrenia is early in the disease process, when symptoms are not acute and the individual is not under the influence of alcohol or drugs. Intervening in addictive behaviors may be difficult or even impossible if the individual is in the midst of a severe psychotic episode. In extreme cases, hospitalization may be required to stabilize the individual and bring symptoms to a manageable level before the recovery process can begin. The transition can then be made from an acute hospital setting to a detox center or inpatient rehab program.

The Harvard Review of Psychiatry states that early detection and treatment of schizophrenia increase the chances of remission, or a significant relief of symptoms. Studies of schizophrenic patients undergoing treatment show that the sooner psychotic episodes are addressed, the greater the likelihood of a positive outcome. Although it may be uncomfortable or embarrassing to talk to loved ones about treatment, getting them into rehab promptly may make the difference between whether or not treatment is effective.

Although psychiatric medication cannot cure schizophrenia, it can make it easier for these individuals to function in society and lead healthier lives. Antipsychotic drugs can help reduce the severity of hallucinatory experiences and delusional beliefs, which allows these clients to experience the world more normally and relate to others in more satisfying ways.

Older antipsychotic medications, known as “typical antipsychotics,” have been used since the mid-20th century to improve treatment outcomes for schizophrenic patients. These medications include:

Looking to the Future

Even though schizophrenia and addiction are considered to be chronic, progressive illnesses, many individuals with these disorders have been able to live productive, satisfying lives. The key to reaching a state of remission in both conditions is an integrated program that devotes equal energy and resources to mental health treatment and substance abuse recovery. Each individual in recovery has unique needs, but the social and cognitive obstacles posed by schizophrenia can be especially challenging. Treatment should be tailored to the individual’s needs and must support the client at every stage of the rehab process. From medical detox through rehab and aftercare, a multidisciplinary team of supportive professionals should provide the necessary motivation and resources for recovery.