Edited by Laura Close
Last Updated: March 16, 2021
Why call us?
Jump to Section 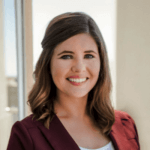 Laura Close
Laura Close is a Senior Web Content Editor at American Addiction Centers and an addiction content expert for Oxford Treatment Center.
Related Topics
Related Tags
co-occurring-disorders
depression
Jump to Section
Depression can increase the risk of chronic illness, including the disease of substance abuse. Up to a third of clinically depressed people engage in drug or alcohol abuse.1 These chemical intoxicants can become a form of self-medication for soothing the feelings of low self-worth, hopelessness, and despair that characterize this mental health disorder.
Although the user may rely on substances used to relieve symptoms of depression, chemical intoxication can actually make depressive episodes more severe, increasing the frequency and intensity of negative thoughts and self-destructive behavior.

A rehab program that addresses both depression and addiction may help to stop the progression of both disorders and empower the individual to build a healthy, sober life in recovery.

Keep reading to learn about:

Unlike ordinary sadness or grief, which can occur temporarily after a loss, the symptoms of depression occur nearly every day for weeks—sometimes months or years—interfering with all aspects of an individual’s life.

Depression comes in many forms. If you believe you or a loved one is suffering from depression, contact a medical professional for an appropriate diagnosis.

To meet the diagnostic criteria for depression established by the Diagnostic and Statistical Manual of Mental Disorders, Fifth Edition (DSM-5), a person must experience 5 or more symptoms of the disorder almost every day for at least 2 weeks, and these symptoms must not be related to a coexisting medical condition or the effects of substance abuse.2 They include:2

The symptoms of depression can cause noticeable problems with work, school, family life, and social relationships. People experiencing a depressive episode may have trouble getting out of bed in the morning due to a lack of energy, fatigue, and a loss of motivation.

They may lose interest in hobbies or pursuits that they were once passionate about or avoid activities that used to give them pleasure. They may be frequently tearful, talk about harming themselves, or become obsessed with thoughts and images of death.

For the loved ones of a depressed person, dealing with the symptoms can be both frightening and frustrating. It’s normal to try to cheer up a friend or to encourage them to “snap out of it”; however, depressive symptoms do not respond to these offers of help. 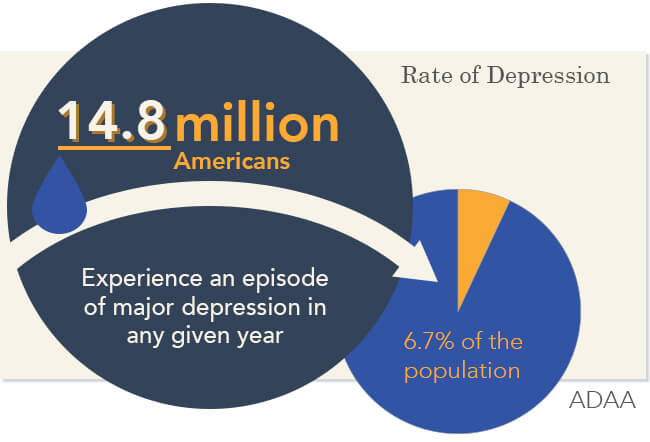 Over 350 million people suffer from depression worldwide, and only about 50% of these individuals will ever receive treatment.3 In the United States, over 15 million adults experience an episode of clinical depression in any given year—close to 7% of the population.4

Depression can have an impact on physical and emotional wellbeing, as well as personal relationships, occupational status, and financial health. But how does depression differ from a long case of the blues?

A mood disorder like depression is not the result of bereavement or a personal setback, such as the death of a loved one or loss of a job, but a chronic, progressive illness that may get worse without treatment.

The only way to treat this serious disorder effectively is through professional therapeutic interventions, such as behavioral modification, support groups, motivational therapy, and antidepressant medications.

Depression can take several different forms based on the severity, duration, and cause of its symptoms. Depression may be best understood as a spectrum of moods rather than a series of separate, clearly defined categories.5

For the sake of diagnosing and treating this serious disorder, psychiatric experts have identified several categories. Along with these categories, there are a number of depressive disorders associated with specific life stressors, psychological conditions, or emotionally taxing situations. These situational disorders share many of the symptoms of general depression, but they occur under specific circumstances and may resolve once these situations are changed. 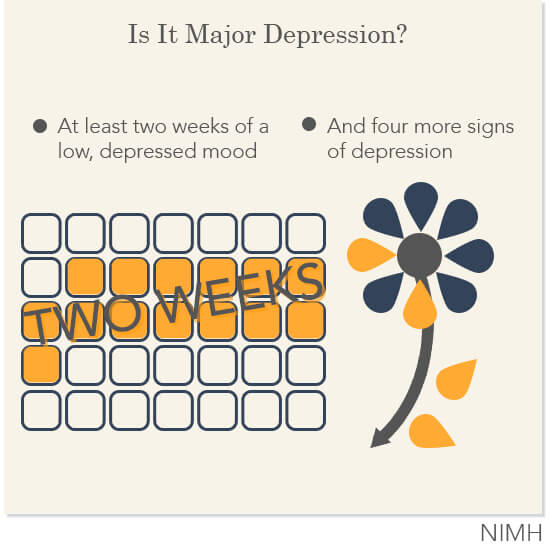 Major depressive disorder, or MDD, is characterized by at least 2 weeks of a low, depressed mood, along with 4 or more additional symptoms of depression, such as suicidal thoughts, a loss of physical energy, sleep disturbances, or feelings of low self-worth.2

MDD is one of the most common forms of mental illness. In 2013, nearly 16 million American adults, or almost 7% of the adult population, had at least one major depressive episode.6

Depressive episodes are a key component of bipolar 1 and bipolar 2 diagnoses, with hypomanic and major depressive episodes characterizing a bipolar 2 diagnosis specifically. Many individuals with bipolar disorder experience episodes of major depression that last for weeks or months, with less frequent cycles of energetic activity and elevated mood.2 It can be difficult to diagnose an individual with bipolar disorder without tracking these mood changes over an extended period of time. 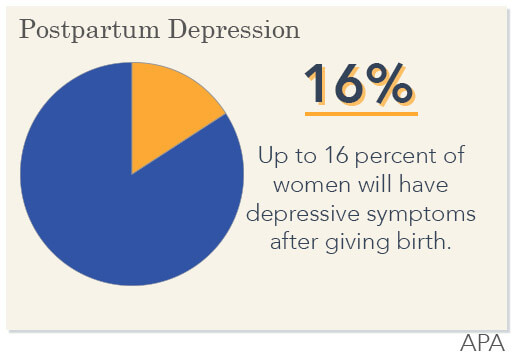 Having a baby is a life-altering experience, but for many women, the transition to motherhood causes emotional difficulties. Up to 16% of women could have depressive symptoms after giving birth.7

New mothers with a history of depression or anxiety, women under financial or personal stress, and women with inadequate social support are especially vulnerable to postpartum depression. Hormonal imbalances after pregnancy, nutritional deficiencies, and exposure to chemical toxins may also play a role in this form of depression.

Also known as seasonal affective disorder, or SAD, this condition is triggered by changes in light and temperature that accompany the seasons of the year. People with SAD may report lower moods, loss of energy, sleep disturbances, and weight changes at specific times of the year.8 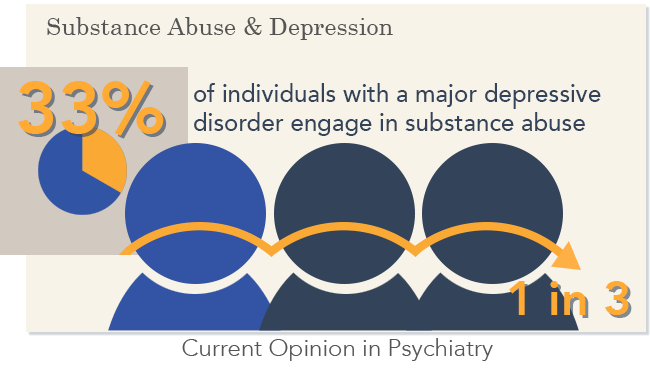 Research has revealed that many of the factors that contribute to depression also play a part in substance use disorders. This is known as co-occurring disorders, or a dual diagnosis. Depression and addiction frequently involve:

In addition, the physical and psychological effects of addiction may mask the signs of depression or worsen the symptoms of this psychiatric illness.

There’s a strong connection between alcoholism and major depression.9

In a nationwide study of 43,093 adults 18 years old and over, researchers found that for those suffering from a current alcohol addiction, there was evidence that over 20% of them also met the criteria for that of a comorbid major depressive disorder.9

Survey respondents in search of treatment for an alcohol use disorder were over 40% more likely than the general population to have at least one mood disorder.9

Alcohol is a central nervous system depressant that may initially function as a stimulant, but that quickly intensifies feelings of lethargy, drowsiness, and depression. Alcohol use, which lowers inhibitions and impairs judgment, can also increase the risk that a depressed individual will attempt suicide.10

Alcohol and drug abuse can worsen the course of a depressive disorder by aggravating the symptoms of depression, increasing the likelihood of hospitalization, and interfering with the course of treatment. Individuals who are being treated for depression while using drugs or alcohol are unlikely to see positive outcomes from therapy unless the substance abuse is taken into account and treated concurrently.

Substance abuse can impair motivation and decreases the effectiveness of therapeutic interventions. In addition, alcohol or drugs can have dangerous interactions with the medications used to treat depression.

The most effective approach to treating depression is a program that integrates mental health and recovery services at the same facility, with a staff of professionals who are cross trained in both fields.

Investigating the Causes of Depression

Depression is one of the most common and most debilitating mood disorders, yet researchers still haven’t determined the exact cause of this condition. There are, however, several theories about the roots of depression.

The brains of some individuals with depressive disorder are structurally different from those who do not have depression. MRI imaging studies reveal that the areas of the brain that are responsible for mood, cognition, metabolic function, and sleeping have a unique appearance in people who have serious mood disorders.11

A disorderly home environment or a history of physical, sexual, or emotional abuse in childhood can increase the chances of developing depression in adolescence or adulthood.12 Trauma therapy can be extremely useful for processing unresolved memories and healing the suppressed emotional wounds that can contribute to depression later in life.

Unlike diseases that are linked to a specific, defective gene, such as cystic fibrosis, depression is more likely to be linked to several genes.

Although the losses that we all experience do not necessarily cause depression, a severe setback can trigger a depressive episode. For instance, the death of a loved one or a bitter divorce could send a person into a period of grief and bereavement, which may turn into depression if the emotions surrounding that loss are not adequately resolved.

Unlike bereavement, depression is often accompanied by feelings of worthlessness, self-loathing, or suicidal thoughts.

Neurologists and pharmacologists have long pursued the connection between brain chemistry and depression in an effort to offer solutions to this disabling condition. Depression has been linked to imbalances in the brain chemicals, or neurotransmitters, that regulate emotional states, moods, energy levels, and appetite, such as serotonin, norepinephrine, and dopamine.14

As with other types of chronic mental illness, there are usually several factors involved in the development of depression. A family history of depression, for example, may be combined with a history of past trauma or the breakup of a marriage to make an individual more vulnerable to depression.

Getting Help for Depression & Co-Occurring Addiction

Living with a family member or spouse who is in a depressive episode can be both painful and stressful. It’s natural for loved ones to feel helpless, frustrated, and even emotionally drained by their experiences dealing with depression. Approaching a relative or friend about depression and substance abuse is very hard, but it can also prevent serious harm to the individual.

Without help, it’s likely that the addictive disorder and the depression—both chronic illnesses—will continue to get worse until the individual becomes severely ill. It’s even possible that an intervention by loved ones may help to prevent a suicide attempt and save the individual’s life.

People struggling with depression often feel isolated, profoundly lonely, and powerless. Offering support and practical solutions could make an enormous difference in the way a depressed person feels about the future.

Mental health professionals can be valuable partners in the process of intervening on behalf of someone who has depression. With the guidance of a therapist, families can learn about the facts behind depression and develop a better understanding of how to relate to someone who has this disorder.

If substance abuse is a factor, a therapist or intervention specialist can provide guidelines on how to effectively get help for someone with depression.