A major, yet preventable health problem in the U.S. is suicide.1 Sadly, veterans comprise nearly a quarter of suicide deaths in the U.S.1

Other commonly cited factors leading to increased suicide risk in veterans as well as other groups:3

Are Veterans at a Higher Risk for Suicide?

The suicide rate for veterans is 1.5 times higher than that of the general population.4

Suicide rates are especially high among older veterans. According the VA, in 2016, about 58% of all veterans committed suicide were among Veterans age 55 years or older.4

Several other factors, in addition to distance, play a role in higher suicide rates. Certain emotional precursors may precede suicide events, including feelings of loneliness, isolation, hopelessness, and depression.8 In a summary of multiple studies, the VA found a variety of factors that may increase the risk of suicide, especially where multiple factors exist, some of these include:9 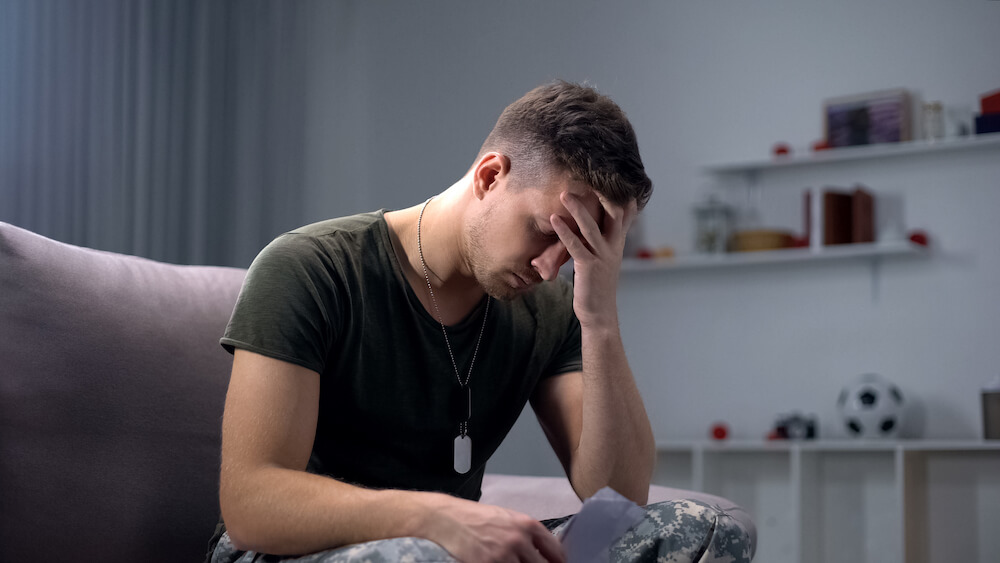 Alcohol and substance abuse can play a particularly and significant role in the increased risk of suicide. In fact, veterans that abuse drug or alcohol are over twice as likely to die by suicide than other veterans.10 In general, people abusing drugs and alcohol are more likely:11

More than 1 in 10 veterans are diagnosed with a substance use disorder.12 Veterans are more likely to use alcohol; many are also have a greater risk opioid overdose.12

Mental illness has strong links to suicide among veterans. While alcohol and drug abuse accounts for higher suicide risk, other co-occurring mental disorders are often associated between substance abuse and suicide.10 The more common mental disorders among veterans are PTSD and depression. For example, exposure to trauma or suffering a TBI while in the service can lead to increased risk of both substance abuse and PTSD or depression.12

Veterans coping with the dual diagnosis of substance abuse and PTSD are likely to have psychiatric and medical conditions, such as:12

In spite of these grim realities, veterans have plenty of reason for hope. The VA has doubled its efforts to address the challenges that veterans face. With the passage of the MISSION Act of 2018, the federal government is making aggressive efforts at extending outreach to veterans. Among other things, the MISSION Act:13

The provision of increasing access to community care providers is especially beneficial to veterans who may be experiencing suicidal thoughts or intentions.

American Addiction Centers (AAC) is a community care provider. Our Desert Hope and Recovery First faculties offer the Salute to Recovery program that employs an array of addiction treatment methods and curriculum dedicated to military veterans with substance use and mental health challenges.

No longer do you or your loved one have to feel isolated or entirely dependent on the VA for help. Because of the MISSION Act and AAC’s Salute to Recovery program, greater access to urgent care providers and treatment, in addition to crisis lines, provide much needed help and hope for the future.

See a testimonial about our Salute to Recovery Program.

Last Updated on February 3, 2022
Share
Charles R. Hooper, MSW
A veteran of the U.S. Navy, Charles Hooper earned a Bachelor of Arts degree from the University of North Carolina at Asheville and later graduated from the University of North Carolina at Chapel Hill with a Master's degree in Social Work.
Related Topics
Related Tags
veterans
You served our country, now let us help serve you.
If you or a loved one are a veteran struggling with addiction, call our confidential, 24/7 hotline. There, we can help you navigate your veteran benefits, choose the best treatment program for your needs, and determine if your treatment costs are covered. Many of our facilities accept TRICARE or work with the VA directly as a referral partner.
Why call us?
Text Message Support for Veterans
Sign up for text support to receive: