Hydrocodone products are the most commonly prescribed drugs in America, according to Consumer Reports. Because of the high potential for diversion and abuse, not to mention addiction liability, hydrocodone products were moved to the more tightly controlled Schedule II Drug Enforcement Administration (DEA) classification after the Food and Drug Administration (FDA) completed a scientific review and requested the change in 2013.

Prescription medications can be beneficial. They can diminish symptoms such as pain and fever and ultimately help people heal. However, individuals can develop an unhealthy dependence with certain prescriptions, such as hydrocodone, especially when misused. At American Addiction Centers, we provide medical detox, along with treatment and ongoing support. If you’re struggling with an active addiction to opioids or other drugs, please connect with one of our admissions navigators at to get the help you need today!

Like most prescription narcotics, abrupt hydrocodone cessation may herald the onset of withdrawal symptoms, which may include:

Symptoms last 5-7 days, in most cases. Medications and therapy can soothe distress and reduce the risk of drug relapse. 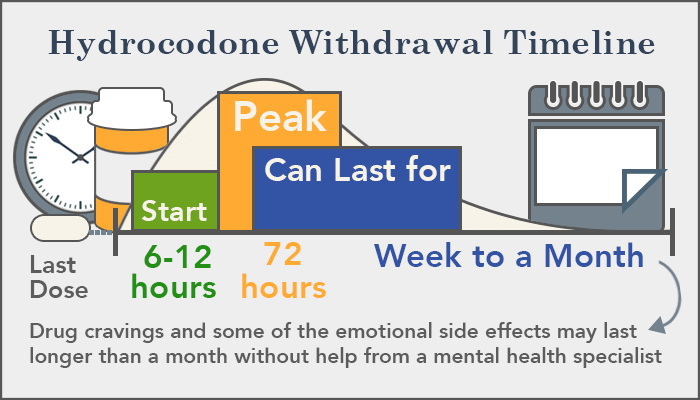 Take Our “Am I a Drug Addict?” Self-Assessment

Take our free, 5-minute “Am I A Drug Addict?” self-assessment below if you think you or someone you love might be struggling with drug addiction. The evaluation consists of 11 yes or no questions that are intended to be used as an informational tool to assess the severity and probability of a substance use disorder. The test is free, confidential, and no personal information is needed to receive the result.

Prescription Opioid Use and Abuse

Prescription opioids are frequently reserved for the management of chronic and/or significantly severe pain; in a dose-dependent manner, their use is also associated with rewarding, euphoric sensations. The National Institute on Drug Abuse (NIDA) reports that opioid painkiller prescriptions reached 207 million in the United States in 2013, and America consumes practically 100 percent of the world’s hydrocodone.

Hydrocodone is an opioid drug that affects levels of dopamine in the brain. When an individual takes hydrocodone regularly for a length of time, they may develop tolerance to the drug, and in order to continue to feel its desired effects, more will need to be taken. Taking increasingly large amounts of hydrocodone may lead to the swift development of physical dependence, however, and ultimately, addiction.

An estimated 2 million Americans struggle with a substance use disorder involving prescription opioids, the American Society of Addiction Medicine (ASAM) reports. One of the effects of significant physiological dependence is the onset of withdrawal symptoms when the drug leaves the system.

Most hydrocodone products, including Norco and Vicodin, are immediate release formulations, with a duration of effects lasting roughly 4-6 hours, the Journal of Pain Research publishes, although there are a few extended-release varieties that last up to 12 hours per dose, which could slightly delay the onset of withdrawal.

Generally speaking, hydrocodone withdrawal will start between 6 and 12 hours after the last dose, depending on which specific drug the dependent individual last took. Opioid withdrawal usually peaks within 72 hours and can last anywhere from a week to a month. Drug cravings and some of the emotional side effects may last longer than a month.

The amount of time an individual took hydrocodone, as well as the average dose and exact formulation of the drug may make a difference in the precise withdrawal timeline and severity. The longer a drug is taken, the more likely that significant physiological dependence has developed. Some underlying medical or mental health issues may also change how long withdrawal will last, as the brain works to restore itself to where it was before hydrocodone was introduced.

Side effects of hydrocodone withdrawal range from mild to moderate to severe and may differ from person to person. Just as the withdrawal timeline can be influenced by the level of dependency the brain exhibits to hydrocodone, so can the intensity and variety of withdrawal symptoms.

Opiate drugs bind to the multiple opioid receptors throughout the brain and central nervous system, and they act to depress certain physiological processes—resulting in a reduction in breathing rate, heart rate, blood pressure, and body temperature. When someone is dependent on an opioid drug like hydrocodone, the sudden removal of it can have distressing consequences as the brain and body work in overdrive to recover. Blood pressure, respiration, body temperature, and heart rate may all spike if hydrocodone use or abuse is stopped suddenly. It is therefore not recommended to stop taking a hydrocodone product “cold turkey” or without medical supervision and input.

Specific withdrawal symptoms when stopping hydrocodone may include: 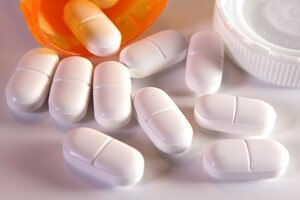 Abruptly quitting an opioid like hydrocodone may result in the onset of very unpleasant withdrawal symptoms.

If a person develops dependence as a result of chronic prescription use, their doctor may first attempt to slowly taper the doses to minimize the severity of the associated withdrawal syndrome. There are also several medications approved to manage opioid dependence, which include:

In many cases of hydrocodone addiction, medical detox helps keep the individual comfortable as the drug clears from the body. Detox can be performed in either an outpatient or inpatient capacity, with a medical professional monitoring withdrawal progress.

Medical detox is the optimal choice for helping to minimize hydrocodone withdrawal and ensure an individual’s safety and comfort. Hydrocodone detox programs monitor vital signs and use medications to keep patients comfortable and stable for a period of 5-7 days in most cases. There are several pharmaceutical options used during medical detox from hydrocodone that reduce withdrawal symptoms and help to prevent relapse in part by lowering the amount and intensity of drug cravings.

A hydrocodone detox program first works to stabilize an individual physically, and generally lasts about a week. A comprehensive hydrocodone detox center will likely include both pharmaceuticals and holistic methods to accomplish this. For instance, a healthy diet plan, exercise program, and structured sleep schedule may all be included at a medical detox center to help the body heal faster, as may meditation, yoga, spa treatments, and/or massage therapy. Detox is likely to be smoother and go faster if all physical elements are attended to so that the psychological side effects of withdrawal and addiction can be managed as well.

The detox center should be only one part of a more comprehensive substance abuse treatment plan that will also include therapy, counseling, and relapse prevention techniques.

More About Drug and Alcohol Detox