Dangers of Mixing Klonopin and Xanax

Although drugs are dangerous on their own, the dangers involved with mixing them are even greater.

Oftentimes, one substance enhances the effects of the other. When people mix drugs, they put themselves at risk of overdose, even more so than when they’re only abusing one substance at a time. Two drugs that are sometimes taken together are Klonopin and Xanax.

What Are Klonopin and Xanax? 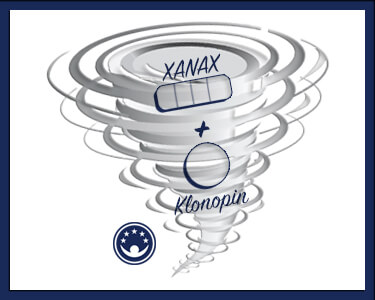 Klonopin is the brand name for clonazepam. It comes in 0.5 mg, 1 mg, and 2 mg dosages. It’s a prescription medication that classifies as a benzodiazepine tranquilizer, used to treat anxiety and panic disorders. The National Alliance on Mental Illness states that clonazepam is also used to treat seizure disorders.

As a benzodiazepine tranquilizer, it affects the central nervous system, in particular the gamma-aminobutyric acid-A (GABA-A) receptors in the brain. These receptors inhibit and reduce activity in the nerve cells in the brain, ultimately make them resistant to excitement. As documented by the National Institutes of Health, drugs in this classification are among the most widely prescribed group of medications, with more than 112 million prescriptions being given for them in 2007 alone.

Xanax is the brand name for alprazolam. It categorizes as a benzodiazepine tranquilizer just like Klonopin does. Doctors prescribe it to treat anxiety and panic disorders. When used as prescribed, it’s designed to affect the chemicals in the brain that might be unbalanced in those who have anxiety. Statistics published by CBS News show that 46 million prescriptions were given for Xanax in 2010 alone. It’s the most commonly prescribed benzodiazepine.


Why Do People Mix Klonopin and Xanax?

Since Klonopin and Xanax cause the same type of effects, people use the two drugs in combination with one another to enhance the effects of each drug. Klonopin lasts longer than Xanax; however, Xanax has a shorter half-life and affects people more quickly than Klonopin does. People who abuse benzodiazepine tranquilizers desire the relaxed feeling they cause. Additionally, people who use Klonopin and Xanax together want to relieve tension.

If a tolerance for one of the drugs has developed already, it’s possible that people who use these two drugs together are trying to feel the same effect they once felt from earlier use. They might also be trying to extend how long the “high” lasts.

What Are the Short-Term Risks of Taking Klonopin with Xanax?

People who abuse Xanax without any other substance are at risk for stomach issues, like nausea and vomiting. Those who abuse the drug may have double or blurred vision. They might also experience confusion, memory impairments, and a lack of focus. They might lose coordination of their muscles as well. Drowsiness and disorientation are common. Slurred speech and difficulty producing words are also possible. These symptoms are the same in those who take Klonopin. When the two drugs are taken together, these effects are amplified.

Generally, use of Klonopin or Xanax alone isn’t deadly, as noted by CBS News. However, these drugs oftentimes become deadly when they’re mixed with other drugs or alcohol. Medical News Today states that Xanax alone can cause mild to severe symptoms from an overdose. When taken with Klonopin, the symptoms are heightened.

In 2005, there were 57,419 emergency room visits involving Xanax, as noted by the SAMHSA. In 2011, the number of cases involving Xanax was 123,744. Of the 1.2 million emergency room visits involving a prescription drug, 10 percent involved Xanax. Of all the cases, 81 percent involved Xanax mixed with another substance, such as Klonopin. The Centers for Disease Control and Prevention (CDC) indicated the number of visits to the emergency room for the nonmedical use of benzodiazepines increased by 89 percent from 2004 to 2008. Because Xanax is more toxic than other benzodiazepine tranquilizers, combining it with another benzo like Klonopin increases the possibility of a severe overdose. 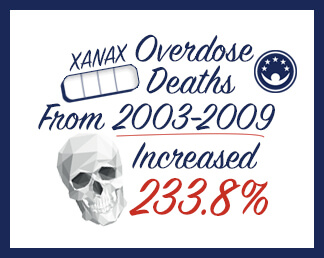 Coma or death may occur from a benzodiazepine tranquilizer overdose, and it is more likely when people mix substances such as Klonopin and Xanax. Per the CDC, there were an increased number of fatalities from prescription drug overdoses from 2003 to 2009.

The number of fatal overdoses from alprazolam alone increased by 233.8 percent during this time.

What Are the Long-Term Risks of Taking Klonopin with Xanax?

Mixing Klonopin and Xanax on a regular basis has the potential to increase the severity of the long-term consequences of benzodiazepine tranquilizer abuse. Chronic use and abuse of drugs in this classification can cause cognitive deficits. For instance, individuals who abuse these substances together may have a difficult time focusing or issues with concentration. They may have difficulty speaking. Memory impairment can develop. Generally, the impairment is mild and primarily affects people’s short-term memory.

These drugs, especially when combined, have the potential to cause brain damage. People who abuse these substances together regularly will experience delirious states. Depression can develop as a result of chronic Klonopin and Xanax abuse. It’s also possible that somebody abusing these two substances together frequently will have psychotic experiences and even act out with aggression. In addition, taking Klonopin with Xanax frequently can lead to impulsive behaviors and mood swings. Depression can occur as well.

Tolerance will occur from taking these two substances together. This means people require more of each substance to achieve the same effect. In general, taking two benzodiazepines together increases the chances of developing an addiction, and this risk is increased with higher doses of the drugs.

Benzodiazepines can result in the rapid formation of physical dependence, and reducing dosages too rapidly or suddenly stopping use can result in severe and even life-threatening withdrawal symptoms. The risks are even greater for those who take two tranquilizers together like alprazolam and clonazepam. Both of these medications enhance the activity of the GABA receptors, which reduces overall activity in the brain. Without the drugs, the brain goes into an overactive state to compensate, which can lead to seizures, convulsions, or even death. The associated mood changes can cause suicidal thoughts and tendencies. In as little as five hours from last use, people can begin to experience the effects of withdrawal.

People who become addicted to the practice of combining Klonopin with Xanax may experience sleep disturbances once they stop taking the drugs. They may suffer from anxiety, tension, depression, irritability, mood swings, panic attacks, and psychosis. People who go through withdrawal from these drugs can experience muscle pains, spasms, and aches. They might have difficulty concentration or cognitive difficulties. Confusion, loss of memory, and abnormal sensory perception are possible as well. Some people have headaches, sweating, and heart palpitations due to the withdrawal process. Benzodiazepine withdrawal, especially from using two drugs in this classification simultaneously, can even cause hallucinations.

Recovery from this type of polysubstance abuse is definitely possible, but it requires professional assistance to ensure safety during the withdrawal process. With medical detox, a supervising doctor will reduce the amount of each drug slowly, so the body can adjust to taking less. If symptoms of withdrawal develop, the taper is slowed to prevent complications. The slow and gradual tapering process tends to happen over the course of months. The exact duration of the taper depends on how long the drugs were taken for and how much was taken each time; co-occurring physical or psychological conditions are also taken into account.

After withdrawal, comprehensive addiction therapy is needed. Without therapy, relapse is highly likely since only the physical aspect of addiction is addressed with detox.