Xanax, a brand name for alprazolam, is a powerful benzodiazepine that is only recommended for use for up to six weeks.

Despite that, American physicians continue to refill prescriptions at often alarming rates. As a result, the number of people seeking treatment for primary benzo addictions continues to rise — from 6,929 in 2002 to 17,019 a decade later in 2012, according to the Substance Abuse and Mental Health Services Administration.

Some people who are dependent on Xanax never abused drugs before. They were suffering from anxiety and looking to the medical field for support and relief. They started using Xanax and felt a vast improvement in symptoms. Some then assumed more of the drug would produce an even greater effect, so they misused it in larger doses. Others just use it for too long, and often with a doctor’s permission. They don’t realize they’re addicted to it until it’s too late.

Some people may try to decrease their dose and then experience withdrawal symptoms that mirror their initial anxiety. They assume they cannot cope without the drug and keep using or abusing it. Sometimes the anxious symptoms that resurface are caused by substance-induced symptoms that would otherwise dissipate if the drug abuse stopped.

Of course, abusers of this drug aren’t limited to those with a prescription in hand. Many are young people who get the drug from friends. College students are especially at risk for dependency since their rate of abuse for these drugs has peaked in recent years. SAMHSA notes those rates are higher among individuals with mental illness, too, touting 31.6 percent of college students who abused prescription drugs in 2010 had a mental health disorder, compared to 15 percent of those who did not have a mental health disorder.

Addiction is present in teens as well, with two-thirds who abuse prescription drugs noting that it’s easy to get their hands on prescription drugs – either from family members or from friends at school. This presents a concern for the long-term health of future generations who may be damaging their brains and bodies from a very young age. 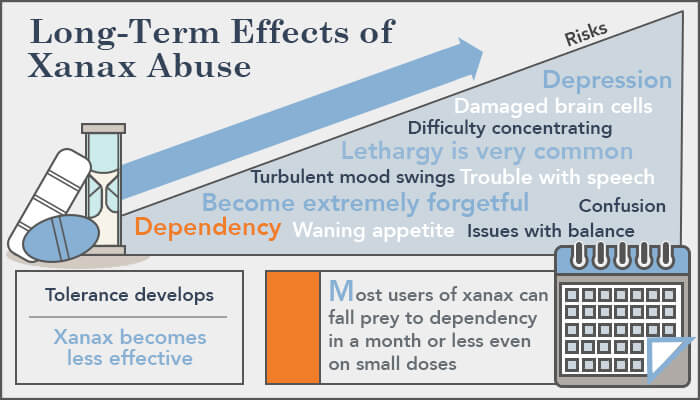 Long Term Side Effects of Xanax

When people abuse a benzodiazepine for a long stretch of time, the brain starts to forget how to operate effectively in its absence. Xanax harnesses control over emotional responses, thought processes, memory, consciousness, and even muscular coordination. All benzodiazepines ramp up the production of neurotransmitters known as GABA, which are responsible for calming nerve impulses that lead to emotional expressions like anxiety and panic.

Individuals who start using Xanax in larger doses are more prone to becoming addicted sooner, but most can fall prey to dependency in a month or less even on small doses.

Xanax can cause appetite to wane and may lead to weight loss, or binge eating episodes when users experience a surge of hunger. While the effects Xanax has on neurotransmitters paints a picture of stimulation, these drugs actually make users quite tired. For this reason, lethargy is very common and can conversely lead to weight gain. Users may become extremely forgetful and others will take note of this. It can get so bad that individuals miss deadlines for work and forget about family functions they are meant to attend.

Effects of Xanax on the Brain 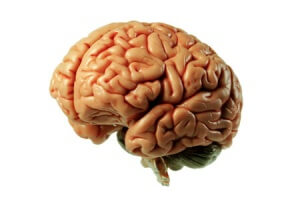 Benzos can also cause the brain to malfunction where coordination comes into play. This means users might have trouble with speech and trouble keeping their balance at times. Difficulty concentrating on tasks is a common problem, too — from menial household chores to big projects at work. Blending over from physical effects that Xanax has on the brain to psychological effects, individuals run the risk of actually damaging brain cells when they are used or abused for several months or more.

Persistent use or abuse of Xanax changes the way the brain operates. The drug has been known to decrease inhibitions and make users more open to taking risks they wouldn’t normally take. They may become more inclined to pick fights with loved ones, drive recklessly, or engage in unsafe sex practices. Depression and even suicidal ideation are realities for abusers of benzodiazepines such as Xanax.

Many individuals who suffer these consequences end up in the emergency room unable to control their own morbid thoughts. Fox News reports the number of people who were treated in ERs for adverse outcomes after using Xanax jumped by a 172 percent margin between 2004 and 2011.

Irritability is common for people abusing this drug; abruptly snapping at someone and feeling bothered by things that wouldn’t usually get on one’s nerves isn’t unusual. Users can also experience hallucinations and paranoid delusions. Confusion is a typical consequence of the drug and can often lead users into a place of hostility that makes them more inclined to provoke others and engage in harmful behaviors, both toward themselves and other people.

More recent research has discovered a potential link between the use of Xanax and dementia. Harvard Health Publications noted in a study of around 2,000 older adults diagnosed with Alzheimer’s disease, and approximately 7,000 without it, that the risk of developing the disease increased by 32 percent for people who had used benzodiazepine medications like Xanax for 3-6 months and by an alarming 84 percent in those who used it longer than six months.

Some benzodiazepines are prescribed to treat seizure disorders. Sometimes, people who struggle with alcohol use disorder receive doctor-monitored prescriptions for benzodiazepines to ease their bodies off dependence because sudden alcohol withdrawal may induce seizures. The action benzodiazepines like Xanax has on the GABA receptors is very important for people who suffer these conditions.

Xanax and other benzodiazepines act on the GABA receptors to calm them down, but they have a high potential for dependence, abuse, and addiction; trying to end an addiction on benzodiazepines may induce seizures too. Although some people may be able to stop taking Xanax suddenly, and only experience some rebound insomnia or anxiety, others may develop seizure problems, which can be extremely dangerous. As a result, medical detox is always required for Xanax withdrawal.

The Epilepsy Foundation notes that most seizures are minor, end on their own, and cause minimal concerns. However, during any seizure, individuals can hurt themselves, leading to head injuries, broken bones, and burns. Sometimes, people can develop problems breathing during or after a seizure; oxygen deprivation can damage the brain and other organ systems.

Long, convulsive seizures – the famous tonic-clonic status epilepticus – is a medical emergency. This type of seizure may last for more than five minutes, and the person requires emergency medical assistance. The person may choke on vomit, saliva, or other fluids draining out of the mouth during the seizure. Repeated seizures, or long-lasting seizures, may cause a coma or death. 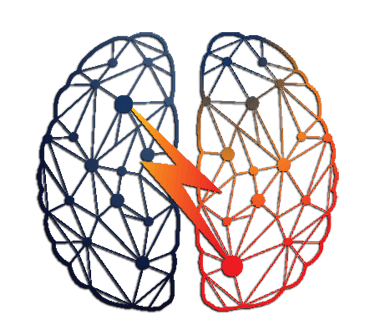 The Centers for Disease Control and Prevention (CDC) notes that withdrawal from alcohol or drugs can cause seizures; this is a condition separate from epilepsy and other seizure disorders, although all seizure disorders share some similarities. Other reports note that seizure disorders from benzodiazepines like Xanax are more likely among people who took high doses of Xanax, ingested the drug often and in large amounts for nonmedical reasons, or who are elderly, as older adults have a greater sensitivity to prescription drugs.

People who take too much Xanax are more likely to develop a seizure, and a great deal of medical evidence backs this up. Drug discontinuance, or rapid dose reduction, induced seizures as a symptom of withdrawal in eight out of 1,980 people who were prescribed Xanax for panic disorder or who were participating in clinical trials for Xanax. In both instances, the majority of people in the study took 4 mg per day for over three months. This is well outside routine prescribing practices but would reflect potential dangers for people who struggle with Xanax addiction.

When seeking help to end Xanax addiction, it is important to report how much Xanax is typically consumed and how long the person has struggled with the drug. This allows the doctor to develop an appropriate taper, which can help avoid seizures and other withdrawal symptoms.

If you, or a loved one, answer yes to the following questions, immediate professional care in the form of medical detox is warranted:

Long-term side effects of abuse may be avoided with proper treatment. Medical detox is the safest way to wean off Xanax and move back into a healthy and fully functioning life. If people started taking Xanax as part of a treatment plan for anxiety or other conditions such as panic disorder, they will require treatment that addresses the original condition. This may come in the form of another medication or more natural alternatives, like yoga and meditation. ABC News reported on one study in which yoga instructors had their brains scanned after one hour of yoga practice, and the results showed a 27 percent increase in GABA levels.

Detoxing from Xanax should never be attempted alone. With the right care during withdrawal and continuing treatment, users can get back on their feet and manage substance abuse and mental health issues with appropriate treatment options that are suited to their long-term needs.

Last Updated on May 20, 2022
Share
Meredith Watkins, M.A., M.F.T.
Meredith Watkins is a licensed marriage and family therapist who specializes in dual diagnosis and eating disorders.
Related Topics
Related Tags
benzodiazepine
xanax
Don’t wait. Call us now.
Our admissions navigators are available to help 24/7 to discuss treatment.
Why call us?
Get addiction help now (24/7 helpline)We’re here for you every step of the way.