What are the side effects of Ativan?

Major side effects associated with Ativan use and/or abuse include:

About 40 million American adults ” 18 percent of the US population ” suffer from some form of anxiety, according to the Anxiety and Depression Association of America.

Many of these individuals are treated with anti-anxiety medications like lorazepam, a short-acting tranquilizer sold under the trade name Ativan. Ativan acts quickly on the central nervous system by increasing the availability of gamma-aminobutyric acid (GABA) to the brain. GABA is a brain chemical that calms the central nervous system, exerting a tranquilizing effect on the mind and body. 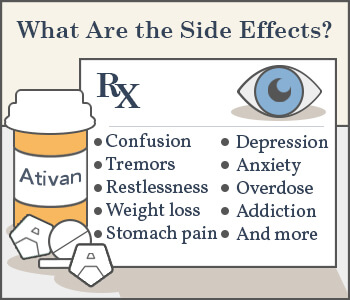 When taken appropriately under a doctor’s supervision, Ativan can help reduce many of the common symptoms of anxiety, including panic attacks, unjustified fears, sleeplessness, agitation, and restlessness. In addition to treating anxiety, Ativan is prescribed for seizure, spasms, alcohol withdrawal, or insomnia. Ativan can causes side effects, especially when it is taken in excessively high doses or used for recreational reasons.

Ativan Effects on the Body

By slowing the activity of the brain and nerves, Ativan also affects physical functions and responses. As a tranquilizer, Ativan can make the user feel calm and physically relaxed. Ativan can also stop painful spasms in muscles, or prevent life-threatening seizures when taken correctly. For patients who take Ativan as directed for legitimate reasons, this medication is generally safe and effective. However, all users must watch out for potential adverse reactions to the drug, such as:

Because it can cause clumsiness, drowsiness, and disorientation, Ativan poses an increased risk of accidental injuries. The National Highway Traffic and Safety Administration cautions that drugs in the benzodiazepine family, like Ativan, can cause symptoms resemble alcohol intoxication, such as loss of motor coordination, slurred speech, visual disturbances, and blurred vision. Driving under the influence of Ativan, or performing other activities that require hand-eye coordination and quick reflexes, can be extremely dangerous, especially if the user has also consumed alcohol or other sedatives.

Ativan Effects on the Mind

Ativan can have powerful effects on the brain and nerves. However, many users experience “rebound” side effects, or a worsening of the same symptoms that the drug is designed to treat. In particular, Ativan can cause rebound anxiety, sleep disturbances, abnormal body movements, and agitation.

The chemical structure of lorazepam is intended to reduce the excitability of the brain and nerves, while soothing emotional responses that create anxiety and restlessness. On the negative side, Ativan can flatten users’ emotional responses and blunt their experiences of the world. Individuals who take Ativan may begin to feel a loss of interest in their everyday experiences or responsibilities. They may feel constantly sluggish and tired, and have a dazed, drowsy appearance.

Signs of an Ativan Overdose: Is It Possible?

Ativan is a safe drug when taken in the prescribed doses, at the recommended times. But taking large doses of this medication puts the user at risk of an overdose, which may end in coma or even death. The number of overdose-related deaths associated with prescription benzodiazepines like Ativan has increased fourfold since 2001, according to the National Institute on Drug Abuse. In 2013, there were nearly 7,000 fatalities attributed to benzodiazepine overdose in the US.
As a central nervous system depressant, Ativan slows down activity in the brain and nerves. When taken alone and used correctly, Ativan rarely causes unconsciousness, coma, or death. However, high doses of Ativan can have fatal consequences, especially when lorazepam is combined with other drugs that also suppress the activity of the brain and vital organs. Many overdoses, either accidental or deliberate, have been linked to the use of Ativan with alcohol, prescription pain medications, other anti-anxiety drugs, and hypnotic medications used for insomnia.

Learning to recognize the signs of a lorazepam overdose could literally save a life:

An Ativan overdose is an emergency that may end in death if the individual doesn’t receive immediate medical attention.

People who have overdosed on Ativan should never be left alone to recover from the effects of the drugs, especially if there are other drugs involved.

One of the most serious side effects of Ativan use is the possibility of developing an addiction to this medication. Ativan addiction is most common in users who take too much of the drug, who use it for nonmedical reasons, or who take Ativan with other tranquilizing drugs, like alcohol, prescription pain relievers, and sleep aids.

After taking Ativan for more than 2-3 weeks, the nervous system becomes accustomed to the effects of the drug.

Many patients require higher doses of the drug to relieve their symptoms, a phenomenon called tolerance. Tolerance may lead to dependence ” a physical or psychological reliance on the drug in order to feel normal. If the user continues to misuse Ativan, or the dose is not reduced, tolerance can lead to addiction. Addiction is a progressive disease that causes a compulsive need to seek and use a drug. The red flags of an Ativan addiction include:

Benzodiazepine withdrawal can have dangerous side effects, including seizures, severe agitation, and hallucinations. When individuals are suddenly deprived of the drug, they may also have headaches, nausea and vomiting, sleeping problems, sweating, and episodes of restlessness. In order to minimize withdrawal symptoms, a drug taper is advised for most Ativan users. In a drug taper, a doctor gradually lowers the dose of Ativan over a certain period of time, until the drug can be safely stopped without compromising the patient’s health or wellbeing.

Along with a physician-supervised drug taper, individuals who are addicted to Ativan need therapeutic treatment for addiction, as well as psychosocial resources to rebuild their lives. In a randomized, controlled trial of benzodiazepine users published in the Canadian Journal of Psychiatry, 180 patients were followed after completing a benzodiazepine discontinuation program. Patients who went through a drug taper were able to stop using the medication for longer periods of time. Heavier benzodiazepine users and those who were also addicted to alcohol or other drugs had more difficulty staying sober. Comprehensive recovery services include individual therapy, access to support groups, behavioral modification therapies, case management, and other research-based interventions.

Many people mistakenly believe that prescription medications like Ativan are less harmful or habit-forming than illegal drugs like meth, cocaine, or marijuana. But prescription drug addiction “including the addiction to tranquilizers like Ativan” has become a major threat to public health in the US. If individuals continue to abuse Ativan in spite of harmful side effects and negative health consequences, they may be addicted to this medication. While talking to loved ones about Ativan abuse may feel awkward or uncomfortable, this expression of concern could be the first step in helping them recover physical and psychological health. If you or a loved one is concerned about their Ativan use, rehab may be an option. See if your insurance provider may be able to cover all or part of the cost of rehab.

Editorial Staff
Author
The editorial staff of American Addiction Centers is made up of credentialed clinical reviewers with hands-on experience in or expert knowledge of ad … Read More
Read Our Editorial Policy
Related Topics
Related Tags
sedatives
side effects
Are you covered for addiction treatment? Find your insurance.
Check My Insurance
Do you have insurance?
Don’t wait. Call us now.
Our admissions navigators are available to help 24/7 to discuss treatment.
Get addiction help now (24/7 helpline)We’re here for you every step of the way.