Where DUIs Happen Most in Major Cities

Driving while under the influence is an extremely dangerous thing to do with potentially deadly consequences. It risks both the life of the intoxicated driver as well as the people around them. If you decide to drink, it is always best to have a designated driver or use a rideshare program to ensure you get home safely.

So what exactly is a DUI? Anyone who is operating a motorized vehicle or a vehicle with any type of drive train can get a DUI-type offense. This includes the use of motorized watercraft, lawnmowers, mopeds, and even non-motorized bicycles.

Drinking and driving happens in certain areas more frequently than others, but exactly where are these DUIs happening the most? We decided to review DUI arrest data by city to determine which streets DUI arrests occur most frequently in major cities. Read on to learn more about what we found out.

The Streets Where DUIs Happen Most in Dallas, TX 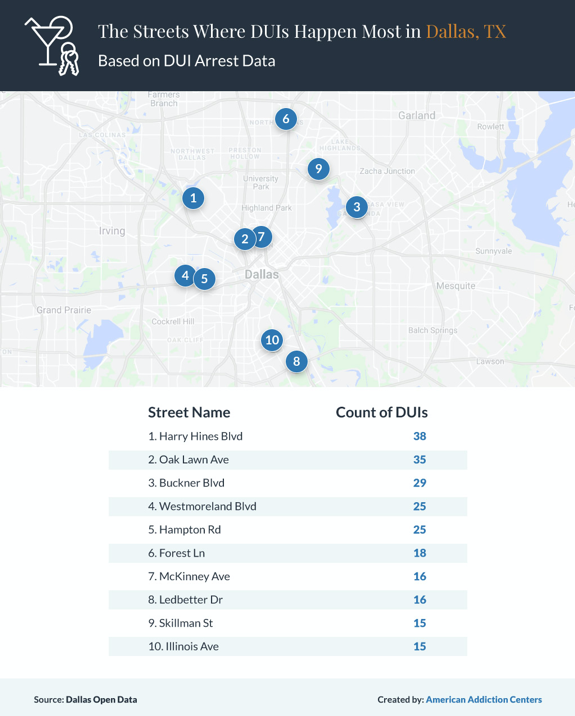 When looking at the streets of Dallas, Texas where DUIs happen the most, Harry Hines Blvd on the outskirts of the city had the most DUI offenses in 2019 with 38 DUI arrests. Following not far behind was a street closer to the center of the city, Oak Lawn Ave, with 35 arrests.

The Streets Where DUIs Happen Most in Philadelphia, PA 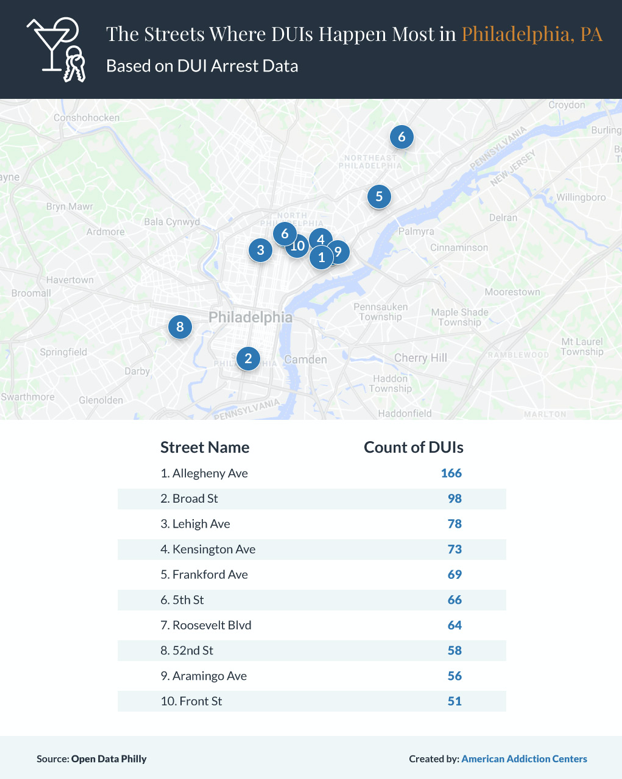 If you think that some of the streets in Dallas see a lot of DUI arrests, take a look at Philadelphia. Allegheny Ave had 166 arrests in 2015, according to the DUI arrest data. The street coming in second place for DUI arrests is Broad St. with 98 arrests. Allegheny Ave blows the rest of the streets of Philly out of the water when it comes to driving under the influence, which is not something to be proud of.

The Streets Where DUIs Happen Most in Los Angeles, CA 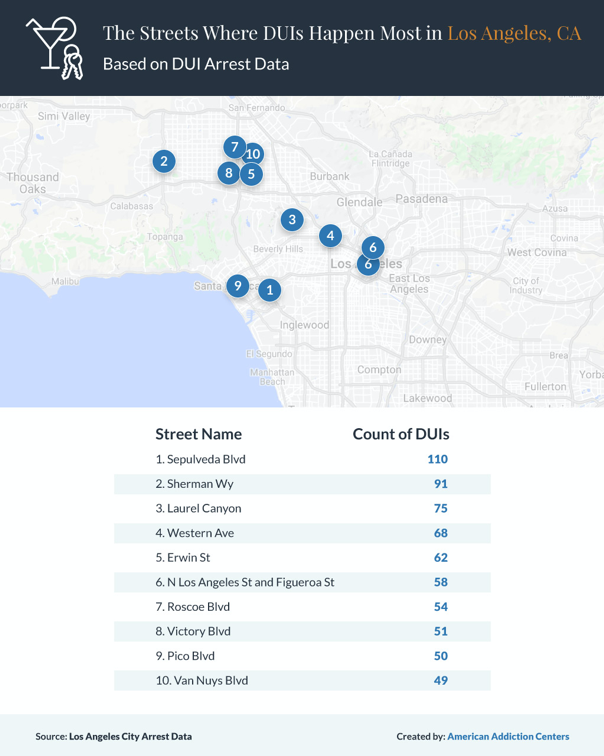 Moving onto Los Angeles, California, the second largest city in the U.S. The street that tops the charts for number of DUIs is Sepulveda Blvd near the city of Santa Monica. Sepulveda Blvd saw 110 arrests in 2019. If you look closer into the inner city of LA, streets like N. Los Angeles St. and Figueroa St. are on the list with 58 arrests each.

The Streets Where DUIs Happen Most in New York, NY 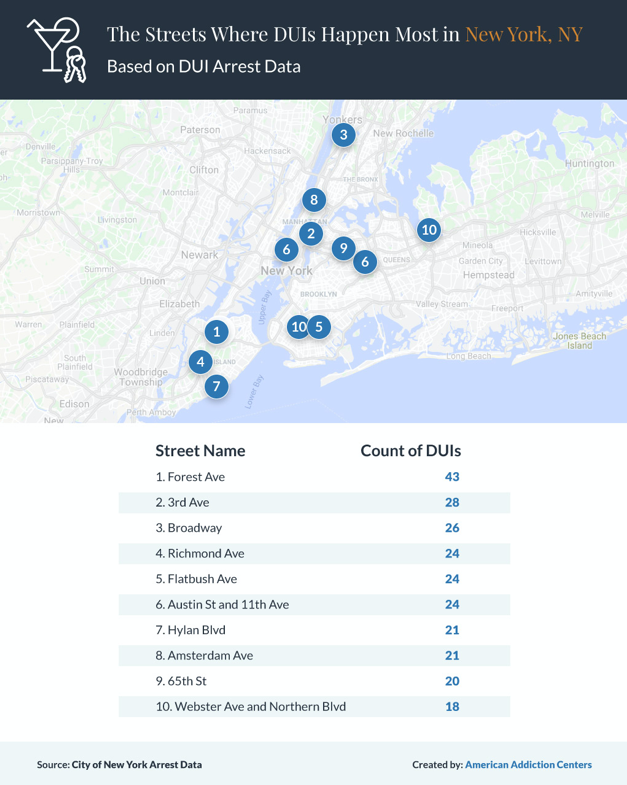 Next on our list is NYC, the city that never sleeps. You would assume most people that live in New York City don’t own cars and utilize public transportation to get most places instead. While the number of DUIs are lower than in cities like Philadelphia and Los Angeles, NYC still has a significant amount of DUI arrests on their streets.

Forest Avenue in Staten Island is the number one street for DUI arrests in NYC with 43 arrests. This makes sense because more people are likely to drive a bit outside of the city than in Manhattan. Following in second and third are 3rd Ave (28 arrests) and Broadway (26 arrests) near Yonkers. If you are going out for the night in NYC and planning to drink, hail a cab and don’t get behind the wheel.

The Streets Where DUIs Happen Most in Washington, DC 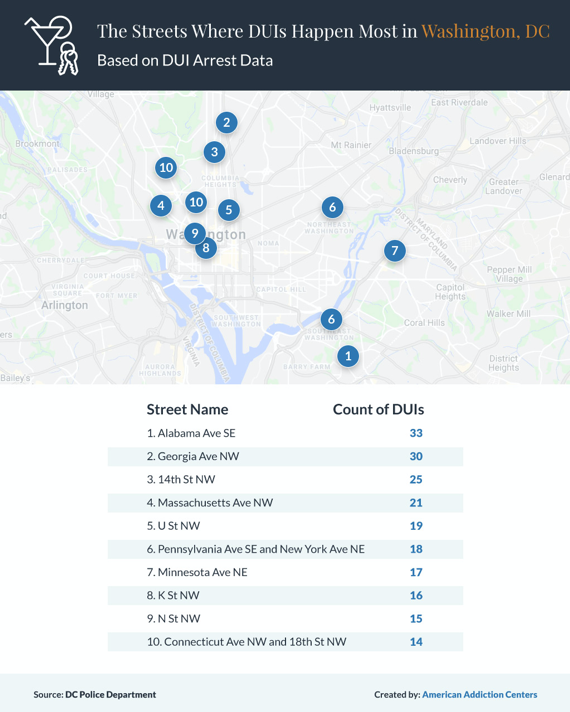 And the last city we looked at was the nation’s capital, Washington, D.C. Similar to New York City, D.C. provides plenty of public transportation options that give people who are out drinking alternative safe ways to get home. So again, the number of arrests in D.C. are not as high as the ones we see in cities like Philadelphia and LA. The most arrests happen on Alabama Ave SE. The city saw 33 arrests on this street. If you move to the northwest part of town, you run into the second street with the highest amount of arrests, Georgia Ave NW (30 arrests). If you live in D.C. or are planning a night out in the city, grab a ride on the metro and make a safe decision.

Drinking and driving is never a safe option. If you or someone you know feels like they shouldn’t be behind the wheel of a car, call a rideshare program or get on some sort of public transportation. It may take you longer to get home but at least you will arrive home safely. If you or a loved one is struggling with alcohol abuse, we can help. Click here to learn more about our treatment programs.