Cocaine Side Effects, Risks & Dangers of Use

Cocaine is a highly addictive stimulant drug used by 14-21 million people worldwide.1 Unfortunately, many people suffer unpleasant consequences as a result of their cocaine use. Risks and side effects of cocaine use may include:

Cocaine has a high potential for abuse, physical and psychological dependence, and poses many serious health risk to users. This is why the Drug Enforcement Administration (DEA) classifies it as a Schedule II controlled substance in the United States.2 It has a few medicinal uses as a local anesthetic, which is the reason it is only one step removed from the most tightly controlled Schedule I drugs.

As a central nervous system stimulant, cocaine elevates vital life functions, such as blood pressure, body temperature, and heart rate. Those using cocaine will generally need less sleep, have less of an appetite, and have more energy and focus. They may be more talkative and excitable, have increased self-confidence, and feel good.

Cocaine use also comes with numerous risks and side effects. In 2011, over 500,000 Americans sought medical attention in an emergency department (ED) for an adverse reaction to the misuse or use of cocaine, and this accounts for more than 40 percent of all ED visits involving illicit drug use or misuse.3 Cocaine addiction rates are high; 855,000 adults over the age of 11 in the United States were considered to have a cocaine dependence in 2013.4 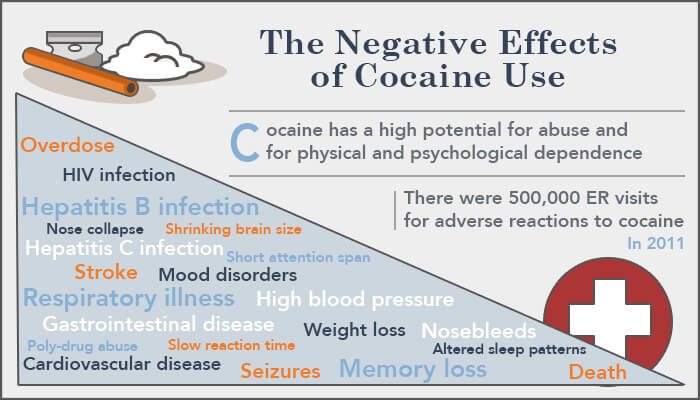 Cocaine addiction is associated with the following potential risks:

Short-Term Side Effects of Cocaine Use

Long-Term Side Effects of Cocaine Use

Long-term side effects of cocaine use may include:

Why Cocaine Is Addictive?

Cocaine acts upon the brain’s communication pathways and disrupts the typical mechanism of certain neurotransmitters, such as dopamine. In turn, this may make someone feel more euphoric than usual.

When people are exposed to something that makes them happy, such as a tasty food, sexual experiences, or another positive stimulus, the brain releases the chemical messenger or neurotransmitter, dopamine, to signify pleasure. Dopamine is then recycled back into the neuron, encouraging people to repeat whatever behavior or event created this surge of happiness and reinforcing the natural reward pathways in their brain. Drugs like cocaine circumvent and interfere with this process by blocking dopamine from being reabsorbed. This creates a flood of the neurotransmitter in the brain, which is what creates the intense “high” those using cocaine feel.

As cocaine leaves the bloodstream, extreme lows may be experienced as a kind of “crash.” Appetite levels may increase and fatigue may set in, reinforcing the impulse to take more of the drug.

Repeated use of cocaine can actually cause the brain to stop making as much dopamine on its own since it has become accustomed to the higher levels initiated by cocaine’s interference.

At this point, a dependency on cocaine may form, causing a regular abuser of the drug to feel depressed, irritable, and anxious without it, in addition to cravings for the drug. People may then continue to abuse cocaine in order to self-regulate their pleasure and happiness, and to avoid withdrawal symptoms. This intrinsically alters the motivation and reward circuitry in the brain. Those addicted to cocaine may feel that they need the drug in order to feel normal again.

Method of Cocaine Abuse in Relation to Risks

The two main forms of cocaine are powered and rock form, termed “crack.” The white powder is generally snorted, smoked, or injected, while “crack” is almost always smoked. The method of how cocaine is abused may influence the type of side effects and risks potentially incurred. For instance, someone who primarily smokes cocaine is more likely to suffer from respiratory and breathing issues, while someone who snorts the drug may have more problems with nosebleeds and damage to nasal tissue and sinus cavities. Injection drug users may share drug paraphernalia, resulting in the use of dirty needles and compounding the risks for infectious diseases, skin irritations, and scarring as well as the potential for collapsed veins.

All methods of abuse are potentially hazardous and run the possible risk of a fatal overdose. An overdose on cocaine is typically the result of toxic levels of the drug in the bloodstream, which speed up blood pressure, respiration, and heart rate. These levels also elevate body temperatures to dangerous levels. Heart attack, stroke, and seizures are all potential complications of a cocaine overdose. Nausea, vomiting, irregular heart rate, headache, tumors, seizures, fever, agitation, increased blood pressure, hallucinations, and chest pain may indicate a cocaine overdose. Seek immediate medical attention if an overdose is suspected.

From Cocaine Abuse to Addiction

There are various factors that may be involved in why some people may be more likely to become addicted to cocaine than others, including:

It is generally accepted that the younger people are when they begin abusing drugs or alcohol, the more likely they may be to suffer from addiction later in life. Almost three-quarters of all Americans admitted for substance abuse treatment who were ages 18-30 in 2011 began abusing substances before the age of 17 and more than 10 percent before age 11.10 This could be in part due to the fact that young brains are still in the process of developing, and parts of the brain that are involved in impulse control are not fully formed until adulthood. If drugs are introduced before the brain can form normally, damage may occur, making it more likely for a drug dependency to form.

Childhood trauma and high levels of stress during adolescence can increase the likelihood of someone turning to drugs for potential relief. Self-medication for underlying medical or mental health issues may also lead to substance abuse and dependency, as the National Alliance on Mental Illness (NAMI) estimates that over 50 percent of all those who abuse drugs may also suffer from a simultaneous mental illness.

Find Cocaine Rehab Near Me

Methods of Abuse Factor into Addiction

The method in which cocaine is abused can also influence the onset of addiction.

Cocaine is a quick-acting drug, and different methods of taking it play a role in how quickly the drug is absorbed and then excreted from the body. Faster absorption may lead to a bigger “high” but also a shorter one.

Smoking crack sends the drug rapidly across the barrier between the blood and brain, causing an intense high, but also a short-lived one. Someone who smokes crack may use it in a binge pattern, smoking several doses in quick succession in order to prolong the high.

The more often cocaine is abused, the more the brain is affected, which can result in tolerance to certain levels of the drug. After the brain becomes tolerant to regular doses of cocaine, a user may then need to increase the dosage in order to continue to experience the same feelings. Increasing dosage also increases the odds for becoming dependent on cocaine.

In a study of cocaine abusers in treatment in 2007 that was published in Substance Abuse Treatment, Prevention and Policy, close to 78 percent were poly-drug abusers, meaning that they abused other drugs in tandem with cocaine.11

Using more than one drug at a time greatly increases all the potential risks and side effects for each substance abused.

One of the most common combinations of drugs is a mixture of cocaine and heroin, injected into the user via a syringe and frequently termed a “speedball.” Heroin is a depressant, and cocaine is a stimulant. Users may wish to cancel out the negative effects of each drug while highlighting the positive, and therefore increasing the “high.” Cocaine wears off faster than heroin, however, so users may attempt to introduce more cocaine to account for this and inadvertently overdose.

In order for an individual to effectively recover from cocaine addiction, and to avoid further risks associated with the drug, an effective cocaine abuse treatment program is needed.

Editorial Staff
Author
The editorial staff of American Addiction Centers is made up of credentialed clinical reviewers with hands-on experience in or expert knowledge of ad … Read More
Read Our Editorial Policy
Related Topics
Related Tags
cocaine
Are you covered for addiction treatment? Find your insurance.
Check My Insurance
Do you have insurance?
Don’t wait. Call us now.
Our admissions navigators are available to help 24/7 to discuss treatment.
Why call us?
Get addiction help now (24/7 helpline)We’re here for you every step of the way.