Mixing ecstasy with alcohol is a dangerous practice that can have serious mental and physical health consequences. These substances each have their own set of potentially dangerous side effects, and when they are combined the user could be at an increased risk of harm than if they had used either alone.1 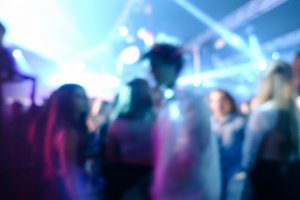 Ecstasy is a synthetic drug known as 3, 4-methylenedioxymethamphetamine, or MDMA.2 Ecstasy is sometimes encountered as a powder or liquid, but is more commonly found pressed into pill form or brightly colored tablets—often with imprinted logos or “brands” on them.3

This synthetic drug—what’s known as a substituted amphetamine—has both stimulant and hallucinogenic effects. Like alcohol, it’s often taken in party environments like nightclubs and music events. MDMA’s effects are usually felt within about 45 minutes.

Ecstasy appeals to many people because of its reputation for eliciting feelings of increased well-being, sociability, empathy, and heightened sensory perception.4

Street or slang names for MDMA include: ecstasy, molly, X, XTC, and more.

However, while ecstasy can make a person feel an enhanced sense of wellness, not all of its effects are so positive. Some adverse symptoms of ecstasy use include:5

Because MDMA is often taken in environments where dancing for long hours in hot environments is normal (such as at festivals or clubs), use of the drug is associated with hyperthermia and heat stroke. In fact, many ecstasy-related deaths that have been reported have resulted from heatstroke.5

The dangers of ecstasy aren’t limited to the short-term effects above. In the long-term, MDMA use may cause:

MDMA initially floods the brain with serotonin (which is thought to mediate some of the feelings of wellness, connection, and empathy that MDMA is known for); however, this abnormal release of serotonin leads to a relative depletion of the neurotransmitter in the days after use.6 The comedown from MDMA has been grimly referred to as “Suicide Tuesday” and includes symptoms such as depressed mood, lethargy, low motivation, somnolence, fatigue, and anorexia.7

What Happens When You Mix Ecstasy with Alcohol?

In a club, a festival, or any other party environment where ecstasy is likely to be used, alcohol is frequently also available. Alcohol is the most common drug abused in combination with MDMA.8 However, mixing the two can be very risky.

Taking ecstasy while drinking alcohol may also elevate the risk of hyperthermia (dangerously high body temperature), especially when the user consumes an insufficient amount of fluids and partakes in continuous activity (such as dancing).12

Both ecstasy and alcohol are associated with a risk of rhabdomyolysis, or the breakdown of muscle tissue that leads to the release of muscle fibers into the blood.10,13 Taking both drugs together may increase this risk. Rhabdomyolysis may lead to severe kidney damage or death if not treated immediately.13

Other Effects of Combining Alcohol and MDMA

According to an article in the Journal of Addiction Research & Therapy that studied the results of MDMA and alcohol co-administration in mice found that:8

In addition, the mice who were pre-treated with MDMA consumed greater amounts of alcohol than the control mice, suggesting that MDMA may impair the dopaminergic reward pathway in a way that could make users reach for more alcohol to obtain its rewarding effect than they would if they were not on MDMA.8

Again, ecstasy use may result in an abnormally large release of serotonin in the brain and a transient depletion of the neurotransmitter when the high wears off. This can lead to feelings of sadness or depression. These feelings can last days, weeks, or longer in the case of repeated use.14

Regular alcohol misuse is also linked to a heightened risk of depression. Alcohol abuse may lead to issues such as strained relationships, job loss, financial concerns, and illness. The chronic sadness, worry, and stress of these problems could contribute to the development to a depressive disorder. Those with alcohol use disorders are more likely to experience major depression at some point in their lives, even after drinking has stopped.15

How Do Ecstasy and Alcohol Affect Sexual Functioning?

Researchers have found that both ecstasy and alcohol consumption are correlated with increased sexual desire.16

Researchers questioned 679 people who were attending music parties at nightclubs and dance festivals and found that increased feelings of attractiveness and attraction to others was most commonly associated with drinking alcohol, and second most commonly associated with MDMA use.  Nearly three-quarters of responders said that alcohol made them feel more attracted to others, while 64 percent of responders said the same about MDMA.16

However, while attraction may rise, sexual performance may suffer. Alcohol can cause delayed orgasms or inability to have them at all, while both ecstasy and alcohol are associated with increased risk of impotence in males.16,17

The combination of lowered inhibitions and increased sexual attraction resulting from both drugs may also lead to risky sexual behaviors.

Overdose is a possibility when consuming alcohol and ecstasy. Ecstasy-related emergency room hospital visits by people under 21 surged 128% between 2005 and 2011. More than one-third of those visits involved young people who were also under the influence of alcohol.18

Because ecstasy may lessen the subjective intoxicating effects of alcohol, alcohol poisoning is a real possibility when these drugs are mixed. The combination often prompts people to drink more than they normally would.8,18

There is also a risk of overdosing on an unknown substance when taking drugs marketed as ecstasy. Since ecstasy is an illicit substance, people don’t know what they are actually getting when they buy the pills. Tablets sold as MDMA have often been found to contain little to no MDMA at all. In some cases, pills sold as ecstasy actually contain bath salts, PCP, ketamine, or DXM. Pills marketed as MDMA may be adulterated with any number of drugs.5

The Risk of Addiction

Most people know that it’s possible to become addicted to alcohol, but what about ecstasy or molly? The research regarding the addictive potential of MDMA is inconclusive. However, research has shown that alcohol can prolong the high of MDMA, increasing its potential for abuse.18

Scot Thomas, MD
Medical Reviewer
Dr. Scot Thomas is Senior Medical Editor for American Addiction Centers. He received his medical degree from the University of California, San Diego … Read More
Read Our Editorial Policy
Related Topics
Related Tags
alcohol
ecstasy
Are you covered for addiction treatment? Find your insurance.
Check My Insurance
Do you have insurance?
Don’t wait. Call us now.
Our admissions navigators are available to help 24/7 to discuss treatment.
Get addiction help now (24/7 helpline)We’re here for you every step of the way.