Fentanyl Abuse in the Hospital 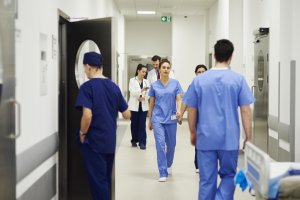 Fentanyl is a powerful synthetic opioid medication used for treating severe pain, especially after surgery or during cancer treatment. When prescribed by a doctor, fentanyl can be administered in a variety of forms that include:

Fentanyl works by binding opioid receptors found in areas of the brain and body that control pain and emotions. Blocking these pain receptors increases the production of dopamine, a chemical that induces a dramatic sense of happiness (euphoria) and extreme relaxation. Extreme caution should be taken when administering this drug, as the targeted opioid receptors also regulate many important body functions such as breathing. Harmful effects of fentanyl can include:

Fentanyl is associated with a high likelihood of dependency, abuse, and addiction.1 Repeated use builds a tolerance to the drug, meaning higher dosage are needed for users to achieve the desired effect. Fentanyl rewires the reward center of the brain, causing the user to continue seeking the drug and making it difficult to stop using. Many patients that take fentanyl as instructed by their doctor can still develop dependence and end up needing to seek treatment for addiction.2

Fentanyl is a major contributor to the current opioid epidemic that is ravaging the United States.3 Because of its high potency, an excessive dosage of fentanyl will frequently result in a deadly overdose.4 There have been several reports of prescribed fentanyl leading to overdoses in hospitals. In June 2019, a doctor was charged with killing 25 people over four years by prescribing fatal doses of fentanyl at hospitals in Ohio.5 Although the doctor claims he was only trying to provide comfort to dying patients, this case demonstrates the risk of administering fentanyl in doses exceeding what is typically prescribed.

In some cases, fentanyl poses too much risk to certain patients and should not be administered at all. A recent study on fentanyl use in cancer patients revealed that up to half of patients never should have been prescribed the drug in the first place.6

Healthcare workers often suffer from extreme work-related stress. And like the rest of the population, they too often turn to drugs or alcohol as a form of coping and self-medication. Around 10%-15% of all workers in the medical profession will misuse drugs or alcohol at some point during their career.7 Doctors and nurses are more likely to abuse prescription medications, with very high rates of abuse frequently seen with opioid narcotics such as fentanyl.8-9

Substance abuse by those in the medical profession is a direct threat to patient care. Due to the increased access that medical staff have to fentanyl, drug divergence has been a major issue concerning patient safety in hospitals.10 The theft and replacement of fentanyl (usually with saline) causes suffering to the patient that is unknowingly untreated for their pain, while the healthcare workers who steal fentanyl for personal use are at risk of overdose. Just recently, over a 16-month span two nurses were found dead in bathrooms at the same Dallas hospital after overdosing on fentanyl.11 Healthcare providers under the influence of fentanyl or experiencing withdrawal symptoms are also more likely to make mistakes and errors that can lead to patient harm through botched surgeries, incorrect diagnoses, and the administration of improper medications.

Fortunately, help is available for medical professionals and patients suffering from a fentanyl addiction. Treatment involves a detox program to treat fentanyl withdrawal and behavioral therapy to help with long-term recovery.