The Mental Effects of Heroin: Short-Term and Long-Term

While an opioid epidemic is poisoning communities and neighborhoods across the country in staggering numbers, it’s easy to forget how damaging such drugs can be to just one person. Heroin has long been at the center of America’s drug woes, and its short-term and long-term mental health effects on users explain how and why the narcotic can ruin lives and devastate everything it touches.

Heroin and the Opioid System

To better understand what heroin does in, and to, the brain, it is necessary to first look at the drug itself. Heroin is synthesized from a combination of the opium poppy and morphine. This makes heroin an opiate; like any opiate, it targets the naturally occurring opioid receptors in the brain.

The opioid system in the human body is responsible for regulating pain, as well as controlling how a person experiences the sensation and anticipation of being rewarded. This makes opioids a double-edged sword; whether found in nature (like the opium poppy) or isolated and derived in a lab (like heroin, or prescription medication based on the chemical compounds of the opium poppy), opiates are very effective painkillers, but they can also be very addictive.

All opioids work the same way in the brain, but the chemistry behind heroin makes it act much faster than most kinds of similar drugs. If heroin is injected into a vein, it takes only 10 seconds for the bloodstream to carry heroin to the brain. When the opioid hits the receptors, the drug binds to specific molecules in the receptors, which are linked to how the brain processes the sensations of pain and pleasure.

The immediate effect of a powerful drug like heroin binding to those molecules is a surge of euphoria and pleasure, giving way to a feeling of supreme tranquility that can last for hours. Healthline describes it as “a warm blanket on the brain.” Pain, meanwhile, is dulled or completely forgotten.

A similar effect can be achieved by the simple act of exercising. WebMD explains that during rhythmic physical activity, the body naturally releases chemicals called endorphins, which bind to the opioid receptors to produce similar sensations of pleasure and nullify the feeling of pain.

For this reason, heroin is abused as a recreational drug. Then, it is consistently abused because there is no other experience that can compare to the blast of bliss and subsequent contentment that come with shooting up.

Among the many problems of using heroin to get high is that the effect diminishes with every exposure to the drug. The more a person takes, the more the body gets used to it – a process known as tolerance. The National Institute on Drug Abuse explains that as the brain adapts to what the heroin is doing to it, it responds less and less if the same amount of heroin is used. This usually compels users to increase their doses, desperate to experience the same sensation that got them hooked in the first place. It may take a number of hits of a higher dose to feel that; but by that point, the tolerance level has already increased, so users simply take more heroin. In the process, they become increasingly dependent on heroin for pleasure and even for the anticipation of pleasure. Nothing else in life matches up to what the heroin does, even as more and more heroin is needed to recapture the feeling of that first dose.

Over time, users withdraw from social activities and obligations, partly because the tranquilizing effects of the heroin preclude activity and involvement in anything, and also because life begins to revolve around seeking out and being in the narcotic haze of a heroin high. 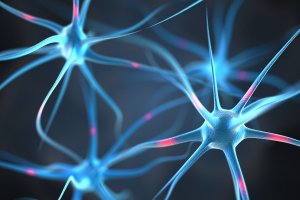 Damage to thinking, decision-making, and behavior are the short-term mental effects of heroin abuse, but from the early days of the habit, the seeds are planted for what can happen in the long-term. One of the mechanics behind the rising tolerance for heroin in chronic users is that the brain is forced to create additional opiate receptors to accommodate the continuous flood of the drug. This is primarily why repeated blasts of heroin can’t duplicate the initial, novel experience of the drug; there is no way for the user’s brain to go back to the standard amount of opiate receptors. It is the process by which the user is compelled to take more and more heroin because there are always more new opiate receptors than there is heroin available.

As the brain scrambles to handle the never-ending (and always-rising) influx of heroin, dopamine production also suffers. Dopamine is a neurotransmitter that is normally released as a response to experiences of pleasure and reward, priming the brain to seek out those experiences again. Like endorphins, however, dopamine production is supplanted by heroin because nothing in nature can compare to how powerfully heroin hijacks the brain’s reward and pleasure pathways. Heroin erases the brain’s ability to produce its own dopamine and instead takes over how the user perceives pleasure and satisfaction.

The Risk of Relapse

The long-term mental health effects of heroin can persist for years. A counselor speaking to the Minnesota Post notes of how some recovering addicts say that they never feel entirely normal, even as their lives undergo a completely positive transformation in treatment. The Journal of Neuroscience Research writes of how “brain dysfunction associated with heroin addiction is sustained even after at least three years of abstinence.” MRI analyses on recovering addicts, compared with control study participants who had never used heroin, found that the addicts retained an intense desire for heroin regardless of the fact that they had completed treatment and therapy, and had remained clean for as long as three years since their last dose. The results of the study of 30 former addicts suggested that certain stressors or cues in their respective environments could trigger the craving for heroin again. The study’s authors wrote of how “the risk of relapse to drug-seeking behavior may be long-lasting and difficult to eliminate in heroin abusers.”

Heroin abuse damages the brain permanently even after a user discontinues the habit and goes through treatment, and treatment takes this into account. This is why, for their long-term mental health, addicts have to be very aware and careful of their stressors, especially since a heroin addiction impedes proper and normal responses to stressful environments and situations.

Different forms of therapy, such as mindfulness therapy or Cognitive Behavioral Therapy, work to educate and train the user on how to control responses and regulate emotions (functions of the brain that have been rewritten by heroin use). This is because, as the Journal of Neuroscience Research pointed out, a brain affected by heroin will still bear the scars, and the threat of falling back into using is a real danger.

To that point, a recovering addict has to take a lot of precautions to avoid relapse. Some steps might be easier than others. Cutting off ties with dealers and old drug friends is a natural step, but so lingering is the damage of a heroin addiction that recovering users are often advised to avoid intimate relationships for the first year of their sobriety. Even if the romantic or sexual partner is not a drug user, the rush of emotions and hormones can be so overpowering that the desire to push the envelope even further and get high again can be very tempting for a recovering individual. So risky is the rollercoaster of love and dating to a recovering addict that Psych Central listed “sex and relationships” as the first of their “5 Didn’t-See-It-Coming Relapse Triggers.”

Even if a user has kicked the habit and completed therapy, the brain is primed for addiction. Decision-making, emotional regulation and stress management will be better than they were before and during heroin abuse; but any stressors in the environment, such as a family history of abuse, a mental health problem, a bad job, a fight with a spouse, or even simple boredom and loneliness, can upset the delicate balance of sobriety after a devastating heroin addiction.

Nonetheless, happiness and health in recovery are possible, and many addicts have turned their backs on heroin for good and turned their lives around. But they didn’t do it alone; recovery is a process that involves dozens of people, like doctors and medical staff at a treatment facility, friends and family to offer support and love, and sober friends and sponsors from a peer group, like Narcotics Anonymous. Whether in the short-term or the long-term, the mental effects of heroin are devastating; but with time and care, the future can be much better.

Last Updated on July 13, 2021
Share
Editorial Staff
The editorial staff of American Addiction Centers is made up of credentialed clinical reviewers with hands-on experience in or expert knowledge of addiction treatment.
Related Topics
Related Tags
heroin
opioid
side effects
Don’t wait. Call us now.
Our admissions navigators are available to help 24/7 to discuss treatment.
Why call us?
Get addiction help now (24/7 helpline)We’re here for you every step of the way.