Symptoms of Heroin Addiction, Use, and Abuse

For the mental health practitioner, the terms physical dependence and addiction are no longer accepted as clinically accurate. Rather, the Diagnostic and Statistical Manual of Mental Disorders, 5th Edition (DSM-5) relies on the term substance use disorder. The DSM-5 is considered a main handbook for mental health purposes. The book is so important that if a disorder is not listed in it, insurance companies typically won’t cover claims for treatment. 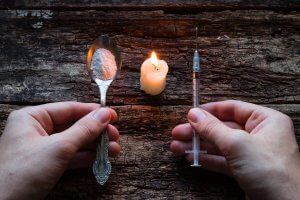 The DSM-5 includes opioid use disorder in its sections on substance use disorders. Opioid use disorders include addictions to drugs such as heroin, the synthetic drug fentanyl, and prescription pain relievers (e.g., oxycodone, hydrocodone, and Percocet).

Per the DSM-5, in order for individuals to receive a diagnosis of an opioid use disorder, they must experience impairment or distress as a result of at least two of 11 symptoms within the same 12-month period. A selection of five symptoms, paraphrased, is as follows:

Information about the diagnosis of an opioid use disorder provides insight for the individual who uses heroin as well as for concerned loved ones.

The explanation lies in how heroin operates in the brain.

When heroin reaches the brain, it is broken down into morphine, which bonds to opioid receptors in the brain. The morphine excites the opioid receptors in an extreme way, which causes a rush of dopamine and other neurotransmitters to flood the brain. This high amount of dopamine in the brain gives rise to the intense euphoria associated with heroin use. Over time, heroin can severely impair natural dopamine regulation in the brain. The changes to the brain environment of a person who uses heroin leads to perceptible physical, psychological, and behavioral signs and symptoms. The person who uses a drug experiences a symptom; people who witness this see a sign. For example, nausea is a symptom; vomiting is a sign.

Physical Symptoms of Heroin Use

Individuals who use heroin have reported in different studies how it feels to do so. Although experiences differ, many say that in addition to experiencing euphoria, they have a warm feeling that removes all their worries. Some describe feeling as if they are in a dream-like state. These feelings can be especially desirous for people who are trying to self-medicate for a mental health disorder. According to one study, 75 percent of participants who used heroin had bipolar disorder, attention deficit hyperactivity disorder, and depression. Other studies have observed that there is a high correlation between heroin use and a co-occurring mental health disorder, also known as a dual diagnosis or co-occurring disorders.

Heroin is associated with a host of short-term side effects or symptoms. The National Institute on Drug Abuse notes that besides exhilaration, the following side effects may occur immediately or shortly after a person uses heroin:

There are numerous long-term side effects associated with chronic heroin use. According to the National Institute on Drug Abuse, the following are some of the known long-term consequences:

In addition, there are other serious long-term effects of heroin use. A person with a history of heroin use may experience:

According to the US Substance Abuse and Mental Health Services Administration (SAMHSA), in 2014, an estimated 586,000 Americans were experiencing a heroin use disorder. (Note: heroin use disorder is not recognized in the DSM-5; it is used herein to denote an opioid use disorder that involves heroin.)

Psychological Symptoms of Heroin Use

The psychological consequences of heroin use can include anxiety, depression, insomnia, and cravings for this narcotic. For some people, the cravings can last for years. There are, however, long-term heroin substitution therapies, such as methadone and Suboxone (buprenorphine), that can stem or end cravings and prevent relapse.

Mental health symptoms emerge at different times, including immediately after use, during withdrawal, and possibly after recovery. To the untrained eye, it may be difficult to distinguish between the mental health symptoms associated with heroin use versus a mental health disorder. Individuals who are concerned that a loved one may be using heroin can take different courses of action. If the individual is amenable to speaking with an addiction specialist, that’s typically the most effective thing to do. Otherwise, a concerned person may have a talk (i.e., an informal intervention) with the individual suspected of using heroin. If that is not effective, a formal intervention that includes an immediate treatment plan can be helpful, and interventions that are led by a professional are generally more successful.


There is overlap between the symptoms categorized here as physical, psychological, and behavioral. While mental health professionals rely on such distinctions, individuals who are concerned about a loved one’s behavior may see a host of warning signs and not know to which facet of heroin use they relate, but they will still sense that there is a problem.

One of the biggest signs of substance abuse is a very general one: a shift in the person’s attitude, appearance, and habits. Noticing that shift is the first step; the next step is developing a plan of action and making the necessary moves to get professional help. It’s important to know that there is help available. No matter how dangerous heroin addiction is, it is a treatable condition, and there is hope in recovery.

Editorial Staff
Author
The editorial staff of American Addiction Centers is made up of credentialed clinical reviewers with hands-on experience in or expert knowledge of ad … Read More
Read Our Editorial Policy
Related Topics
Related Tags
heroin
opioid
Don’t wait. Call us now.
Our admissions navigators are available to help 24/7 to discuss treatment.
Why call us?
Get addiction help now (24/7 helpline)We’re here for you every step of the way.