What to Do When Your Child Is Using Marijuana

A parent who is facing a child’s drug abuse may feel a host of conflicting emotions, such as disappointment and guilt over any perceived parenting missteps.

But dealing with a child’s drug use, whether it is experimental or more developed, is a reality for many parents. Marijuana is often one of the main drugs of choice among teens and adolescents. Research shows that the majority of adolescents who enter drug rehab do so for marijuana abuse.

What Can Parents Do If Their Child Is Using Marijuana? 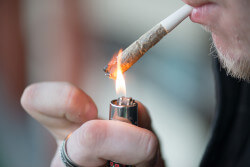 If you find your child is actively using marijuana, you have won half the battle because you know what’s going on. This is a great benefit as many parents are in the dark. But what are the next steps to immediately take? The Partnership for Drug-Free Kids advises that the following actions can help:

Signs Of Marijuana Use To Look Out For

The following are some ways parents can determine if their child is using marijuana:

Physical & Psychological Signs Of Marijuana Use

Some children may use marijuana at home or return home before the effects have fully worn away. It is important to know the physical side effects, which range in severity, but can include:

Behavioral Signs Of Marijuana Use

The behavioral signs of marijuana abuse can be the greatest tipoff to the existence of the problem. When individuals become psychologically addicted to marijuana, they will make the drug a main priority in their day-to-day lives, possibly to the exclusion of important work, family, school, and/or personal obligations. The following are some additional behavioral side effects of marijuana abuse:

Marijuana users, in order to protect their supply, may stash different quantities of the drug at home. Some parents will want to have evidence of marijuana abuse before approaching their child about their suspicions. For this reason, some parents may opt to search their children’s room, as well as the entire house, for marijuana and/or marijuana paraphernalia. There are numerous potential hiding places for marijuana, such as:

When parents reach a point where they are sure their child is using marijuana, the next concern will be how to approach the child. This necessary step can be fraught with unsettling emotions. It is important to gather motivation and momentum from the unfortunate reality that even occasional recreational drug abuse can escalate to addiction. Also, a host of negative consequences, such as an arrest, can arise from marijuana abuse.

How To Talk To Your Child About Smoking Pot

When individuals experiencing marijuana abuse are in denial or resistant to getting help, concerned individuals often need guidance on how to get the person into treatment.

Oftentimes, marijuana abuse occurs as part of poly-drug abuse, which can make the need for treatment even more urgent. The best practice is to know about feasible treatment options before approaching the person who is abusing marijuana or other drugs. A next step is to have an informal or formal intervention.

An informal intervention can involve simply approaching the person to have a talk about the suspected or known drug use. According to Partnership for Drug-Free Kids, the following are some helpful points to keep in mind when discussing drug-related concerns:

The importance of the family in recovery cannot be overstressed. A rehab center that offers comprehensive programming may invite family members into therapy, especially in view of the minor age of adolescent or teen clients. Forms of family participation include family therapy (as a group that includes the recovering person), educational programs (about drug abuse and the recovery process), and/or family social gatherings on site.

Last Updated on August 30, 2021
Share
Meredith Watkins, M.A., M.F.T.
Meredith Watkins is a licensed marriage and family therapist who specializes in dual diagnosis and eating disorders.
Related Topics
Related Tags
children
Marijuana
Don’t wait. Call us now.
Our admissions navigators are available to help 24/7 to discuss treatment.
Why call us?
Get addiction help now (24/7 helpline)We’re here for you every step of the way.