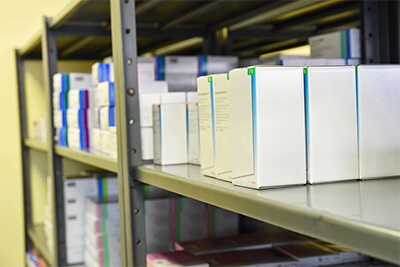 Several different categories of OTC medications are prone to abuse. Recreational use of these substances can be habit-forming and potentially destructive if left unchecked. American Addiction Centers is committed to helping patients recover from addiction to all substances — illicit, prescription, and even over-the-counter. If your abuse of OTC medications is causing health problems or difficulties in your personal or professional life, call

Medications that contain the antitussive (cough suppressant) dextromethorphan (often abbreviated as DXM by abusers) are particularly dangerous to abuse. DXM is an ingredient in a number of over-the-counter medications designed to treat allergies, cold symptoms, and symptoms of the flu. Products like NyQuil, Robitussin, and Vicks Formula 44 contain DXM.

The United States Drug Enforcement Administration (DEA) lists the effects by dosage and separates them by what it terms as “plateaus of abuse.”

A number of other serious effects can occur as a result of DXM abuse, such as liver damage (Often, DXM is sold in product that is a combination of DXM and acetaminophen, which is known to produce liver damage at high doses.), brain damage, and the development of a significant substance use disorder. DXM does not appear to produce significant withdrawal syndromes in individuals who abuse it; however, individuals who have abused the drug for significant periods of time may experience a number of emotional and psychological issues if they attempt to discontinue use abruptly.

Estimates suggest that about 10 percent of teens have abused cough syrups. The Substance Abuse and Mental Health Services Administration (SAMHSA) reports increasing numbers of emergency department admissions that are associated with antitussive agents like DXM between 2004 and 2010; however, rates leveled off in 2011.

Over-the-counter stimulants include a number of stimulant medications found in diet pills, energy drinks, herbal formulations, and decongestants as well as caffeine.

The term diet pills includes a number of different medications, many of which are sold over the counter. These include appetite suppressants, mild stimulants, and herbal substances that may act as stimulants or appetite suppressants. OTC medications for weight loss are not effective for most individuals, and their abuse is a major problem in the US. The National Comorbidity Survey Replication, which is a large study that looks at different types of mental and physical disorders, reports that about 6 percent of young females and about 4 percent of young males abuse OTC diet medications. Other studies have suggested that abuse of diet medications is often associated with eating disorders, such as bulimia.

Abuse of over-the-counter diet medications often occurs as an extreme attempt to lose weight or to control weight. In addition, individuals with eating disorders often abuse laxatives as a form of weight control. Abuse of any these medications can result in a number of serious physical issues, including increased potential for stroke or heart attack, gastrointestinal issues, liver or kidney damage, significant issues with dehydration, and a number of other issues, such as hallucinations, delusions, depression, anxiety, and other psychological symptoms.

Herbal diet products have a number of particularly distressing issues associated with their abuse because these substances are not controlled by the Food and Drug Administration (FDA); therefore, they may contain potentially dangerous products, or they may not contain the products in the amounts that are listed on the label. For instance, the FDA ban on the stimulant ephedra, which has been demonstrated to have a number of serious potential side effects, such as cardiovascular effects, applies only to dietary aids and not to herbal products. Other products may contain similar substances with the potential for dangerous effects.

A number of stimulants are contained in decongestants that include phenylpropanolamine, pseudoephedrine, and methylephedrine. These drugs produce short-term feelings of euphoria and increases in energy. When taken chronically or in excessive amounts, their use can lead to cardiovascular problems, irregular heartbeat, hallucinations, and even potential seizures. In addition, some of these substances are often used in the production of the highly dangerous illegal drug methamphetamine, or crystal meth.

A number of energy products contain mild stimulants, and many of these contain high amounts of caffeine. Various OTC medications, such as NoDoz, contain caffeine, and individuals taking these medications in large amounts may suffer a number of problems. Large doses of caffeine can result in potentially serious health issues, including dehydration, gastrointestinal issues, the exacerbation of cardiovascular issues, issues with anxiety, panic attacks, and even issues with caffeine intoxication and/or caffeine withdrawal.

According to the American Psychiatric Association (APA), caffeine intoxication can produce insomnia, gastrointestinal issues, nervousness, restlessness, muscle twitching, and a number of other potentially serious symptoms. Withdrawal from caffeine can produce malaise, fatigue, difficulty concentrating, headaches, and depression or irritability. Energy drinks often contain herbal substances that are also not regulated by the FDA; therefore, a number of additional potential dangers, as mentioned above, may exist with drinking these products.

The abuse of over-the-counter pain relievers is most likely not a result of individuals attempting to achieve euphoric effects associated with the psychoactive properties of these substances, but represents a misuse of these substances to control everyday aches and pains or even more chronic pain issues. Data from SAMHSA suggests that over 50 percent of individuals who report using these medications also report misusing them at one point or another.

Most of the drugs that have dangerous potentials in this category are non-steroidal anti-inflammatory drugs. The potential dangers of misusing these drugs for chronic periods of time are significant. For instance, individuals taking high doses of medications that contain acetaminophen for chronic periods of time risk a number of health hazards, including liver damage, kidney damage, and seriously damaging cardiovascular effects.

A number of sources that discuss abuse of over-the-counter pain relievers include formulations that contain codeine; however, the DEA lists codeine as a controlled substance (either Schedule II or Schedule III, depending on the concentration of codeine in the formulation). Thus, codeine does not qualify as a potential OTC medication of abuse as it is not legally available without a prescription from a physician even though some individuals may be able to obtain codeine illegally through online or other sources.

OTC medications that are designed to treat motion sickness often contain diphenhydramine (most often marketed as Benadryl) or the drug dimenhydrinate (most often marketed as Dramamine). According to Drug Facts and Comparisons, the symptoms associated with abuse of these drugs vary significantly depending on the individual’s metabolism and body weight. Many cases have been reported where individuals take extremely high amounts of these drugs to achieve the psychoactive effects that can be associated with their use, such as mild euphoria and sedation.

Using high doses of these drugs can lead to significant issues with potential heart attack, seizure, and the development of a comatose state. Chronically abusing these drugs can result in a number of issues with organ damage (e.g., liver and/or kidney damage), the development of psychological symptoms that can include depression, and various cognitive issues, such as problems with memory and learning.

A recent review of the research published in the Journal of Substance Abuse suggested that abuse of OTC medications is relatively rare; however, this issue remains a significant problem that can be effectively addressed. Because a large proportion of individuals who abuse OTC medications are younger, the research suggests that young people who are taught the risks of drug abuse are significantly less likely to abuse these drugs than younger people who are not taught these risks. Often, parents are the most effective sources for relaying this information.

Treatment for OTC medication abuse would generally follow the same protocol as treatment for other drugs of abuse, such as prescription medications and illicit drugs. One important consideration is to adjust the treatment protocol to fit the needs of the individual. Since many individuals who abuse OTC medications are young, there are number of adjustments to the care plan that may help to increase the overall effectiveness of treatment.

Editorial Staff
Author, American Addiction Centers
The editorial staff of American Addiction Centers is made up of credentialed clinical reviewers with hands-on experience in or expert knowledge of addiction treatment. Read More
Read Our Editorial Policies
Related Topics
Related Tags
over the counter
Don’t wait. Call us now.
Our admissions navigators are available to help 24/7 to discuss treatment.
Why call us?
Get addiction help now (24/7 helpline)We’re here for you every step of the way.
;