What Are the Health Risks of Mixing Ritalin and Alcohol?

Why Mixing Ritalin and Alcohol is Dangerous

Both Ritalin and alcohol have risks associated with their use. When Ritalin is used according to the parameters of a legitimate medical prescription, the chances of serious side effects are slim, and the same goes for moderate drinking. When these substances are mixed, however, the chances of experiencing negative effects increase.

Ritalin is a prescription medication that includes the active ingredient methylphenidate, and it is used to treat symptoms of attention deficit hyperactivity disorder (ADHD). Ritalin is a schedule II controlled substance and falls under the drug class of stimulant drugs. According to the Centers for Disease Control and Prevention (CDC), ADHD is one of the most common neurological disorders among children. ADHD involves difficulty with focus and problems with impulse behavior. While mild versions of these symptoms are common in most children, those who suffer from ADHD experience more severe symptoms, are overly active, and often fail to grow out of the behavior as they mature.

Ritalin is used to control the symptoms most commonly associated with ADHD, and it is considered an effective pharmacological treatment for the disorder. The drug is a stimulant. Ritalin and other prescription stimulants are usually prescribed for daily use, according to the National Institute on Drug Abuse (NIDA). The combination of a drug like Ritalin and therapy often result in improvements in self-esteem, the ability to think clearly, and social interaction. The benefits to a child struggling with ADHD are evident.

According to the National Drug Intelligence Center, Ritalin is often abused for its stimulant effects. These effects include:

When Ritalin is abused, it is typically not obtained through legal means. Relatively few people who suffer from ADHD and have legitimate prescriptions for the mediation abuse it. In fact, the effects of Ritalin on those who have ADHD are different than for those who don’t have the disorder.

Generally, those who abuse Ritalin get the substance from friends or family members who have prescriptions for it. They may either buy the pills from their source or steal them. In some instances, people may visit doctors and “fake” symptoms of ADHD in an effort to get prescriptions. Ritalin can also be procured on the street from dealers.

Ritalin users can consume the drug in a variety of ways. As it comes in pill form, simply swallowing the pill is common. Another popular form of ingestion is crushing a pill up and snorting the resulting powder. This enables the substance to get into the bloodstream faster than if the pill is taken orally and has to pass through the digestive system. In some cases, those who abuse the drug have been known to dissolve a Ritalin pill in water and inject the drug.

Ritalin abuse is typically seen in teenagers and young adults, and these drugs are commonly referred to as “smart drugs” or “study drugs.” Students often believe that the drug can increase focus and attention, allowing them to stay up all night cramming for exams or to finish a paper. Despite this widespread belief, it’s actually been shown that those who use Ritalin and other prescription stimulants in this manner tend to perform more poorly academically than those who don’t use the drugs.

Ritalin is not considered to be addictive if taken in the prescribed amount orally. However, it’s when a user increases the dosage or uses other forms of consumption that the potential for addiction arises. In addition, addiction is a possibility any time a person abuses the drug, which occurs if a person who doesn’t have a legitimate medical need and prescription uses it.

Overdose on Ritalin is possible. According to Medline Plus, some symptoms of Ritalin overdose include:

While alcohol is legal for purchase and use for individuals 21 and older in the US, it can have significant effects on the brain. Effects include alterations in mood, changes in behavior, reduced inhibitions, confusion, and difficulty with motor functions, according to the National Institute on Alcohol Abuse and Alcoholism (NIAAA).

Long-term abuse of alcohol can have serious effects on the body and lead to various issues, such as:

An alcohol use disorder (AUD) is classified as any kind of problem drinking, which means drinking affects one’s life in a negative fashion. This ranges from binge drinking all the way to full alcoholism and physical dependency. According to NIAAA, more than 15 million adults struggle with AUD, and more than 80,000 people die from alcohol-related causes each year.

In 2009, about 32 percent of drug-related emergency room visits involved alcohol, which amounted to more than 650,000 visits, according to NIDA. More than 500,000 of those visits involved both alcohol and another substance, indicating the clear danger in mixing alcohol with other substances. Nearly 200,000 of the alcohol-related ER visits that year involved individuals under the age of 21, the legal drinking age.

Alcohol and Ritalin are not safe to mix under any circumstances; however, it is common for recreational users to mix the two, according to Healthline, as Ritalin is a stimulant and alcohol is a depressant. Users may do so in an attempt to counteract the negative effects of either drug; for example, a person may take Ritalin to offset the depressant or sedative effects of alcohol. This essentially allows them to party for longer and drink more. 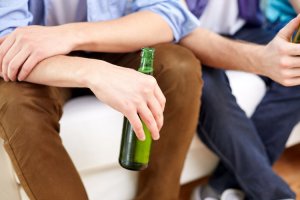 Mixing these two drugs can result in unpredictable effects. The introduction of alcohol into a system with Ritalin in it can see an enhancement of the negative side effects of Ritalin. This can cause a user’s heartbeat to increase to dangerous levels and can also result in high blood pressure. Problems with mood and irregular sleeping patterns can develop from the combination of alcohol and Ritalin as well. Some users of both substances also see an increase in anxiety, which can lead to further self-medication and begin a difficult cycle of drug abuse.

Since Ritalin’s stimulant properties can seem to counteract some of the effects of alcohol in an individual, this can lead to overdrinking to dangerous levels. This can result in alcohol poisoning, which is most common in underage drinkers, an age group that sees a lot of Ritalin use. Alcohol poisoning can lead to death and other serious health complications, showing just how dangerous the substance can be even on its own.

According to the Food and Drug Administration (FDA), doctors should be cautious about prescribing Ritalin to anyone that has had alcohol abuse, or other substance abuse, issues in their past. Substance abuse tendencies can result in overuse of the drug and an increased tolerance for it.

While the short-term effects of mixing Ritalin and alcohol are certainly significant, there are also long-term problems that can arise from co-occurring abuse. Nutrition problems become common, as Ritalin often suppresses appetite. Liver disease may arise, mostly due to the consumption of alcohol and its damaging effects on that particular organ. A lack of energy is also common for those abusing both substances, which can lead to an increase in the consumption of Ritalin or other stimulants in an effort to combat the condition.

Depression is another long-term effect of using both alcohol and Ritalin. Depression is a very common side effect from drug abuse, and it can often lead to even more substance abuse. The cycle between depression and substance abuse has been well documented, and this particular drug combination is certainly not immune to it. Heart disease, agitation, and erratic sleep patterns can also be experienced by individuals who mix Ritalin and alcohol.

It’s clear that both Ritalin and alcohol are common substances of abuse and very dangerous when abused alone. However, combining the two substances puts an individual at a great risk for dangerous side effects, both in the short-term and long-term. Ritalin’s prevalence among young adults makes this combination particularly hazardous, as underage drinkers tend to be among those at the highest risk for alcohol poisoning. Ritalin’s ability to somewhat mask the immediate effects of alcohol can also result in the consumption of a dangerous amount of the substance, leading to overdose of either or both substances.

Last Updated on February 11, 2022
Share
Editorial Staff
The editorial staff of American Addiction Centers is made up of credentialed clinical reviewers with hands-on experience in or expert knowledge of addiction treatment.
Related Topics
Related Tags
prescription
Don’t wait. Call us now.
Our admissions navigators are available to help 24/7 to discuss treatment.
Why call us?
Get addiction help now (24/7 helpline)We’re here for you every step of the way.