Dangers of Mixing Valium and Alcohol or Drugs

What Are The Dangers of Mixing Valium and Alcohol or Drugs?

Although Valium is safe for most adult users when it is taken as prescribed by a doctor, mixing Valium with alcohol or other drugs can lead to:

While some users mix Valium with alcohol or other drugs to intensify their calming effects, others take Valium with other substances without being aware that they are endangering their health and safety.

Although Valium is safe for most adult users when taken as prescribed under a doctor’s supervision, abusing this medication by mixing it with other medications, illicit drugs, or alcohol poses serious risks. To prevent excessive sedation, an injury, or an overdose, it is critically important to be aware of the possible interactions of Valium with other chemicals. 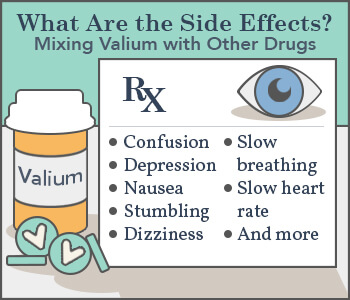 Valium, or diazepam, belongs to a category of drugs called benzodiazepines. Diazepam is currently prescribed as a sedative/anxiolytic and anti-seizure medication. It is also used to treat muscle spasms, restless leg syndrome, and the symptoms of alcohol withdrawal. The benzodiazepine family includes other popular tranquilizers, such as alprazolam (Xanax), lorazepam (Ativan), and clonazepam (Klonopin). Benzodiazepines are scheduled substances because these sedatives have a potential for abuse and addiction. Taking Valium with other drugs or alcohol not only sets the stage for dangerous side effects; it also increases the likelihood of developing chemical dependency and addiction.

Effects on the Brain and Body

Valium acts on the central nervous system to slow down excessive electrical impulses in the brain. This tranquilizing effect can help to prevent seizures, abnormal body movements, and muscle spasms. It can also have a quieting effect on the user’s moods and emotions or make the user feel drowsy. Valium is often prescribed to help people with anxiety or insomnia to help them relax and fall asleep. Individuals who abuse Valium take the drug for its calming, soothing effects.

When taken by itself according to the directions of a doctor or therapist, Valium is a relatively safe drug, with a low risk of harmful side effects. But the dangers of Valium increase significantly when this medication is taken at the same time as other drugs. In particular, the following substances combined with Valium pose a high risk of overdose, loss of consciousness, coma, and death:

Many of these substances have depressant actions, suppressing activity in the brain and slowing various physiological processes. Mixing these drugs with Valium can intensify the effects of this tranquilizer, making the user even more vulnerable to the dangers of central nervous system depression. The use of Valium with stimulants like cocaine or methamphetamine can also endanger the user’s health and safety. Abusing multiple drugs increases the risk of dangerous drug interactions, overdose, addiction, accidents, and fatalities.
The use of Valium with alcohol, opiate drugs, or other prescription medications is not always deliberate. Some people with legitimate prescriptions for Valium may consume alcohol or take other medications that interact with this drug without being aware of the potential dangers. The National Institute on Alcohol Abuse and Alcoholism cautions that tranquilizers can increase the sedative effects of alcohol, making the user even more sleepy, confused, disoriented, and vulnerable to accidents or injuries. Valium users should read medication labels carefully and avoid alcohol while taking this drug.

According to Morbidity & Mortality Weekly Report (MMWR), benzodiazepines like Valium were involved in over 408,000 emergency room visits in 2010. In patients who have overdosed on Valium, alcohol is often mixed with this prescription medication, augmenting its sedative effects. In fact, MMWR reports that over 27 percent of emergency department visits involving benzodiazepines also involved alcohol, and that over 26 percent of the individuals who died as a result of benzodiazepine use were also consuming alcohol.

Opioid medications like Percocet, OxyContin, Dilaudid, and Vicodin are widely prescribed in the US to control pain. The Western Journal of Emergency Medicine notes that in 2012, there were nearly 182 million prescriptions written for opioid drugs, and that the growing availability of these medications is partially responsible for the increase in ER visits involving opioids, alcohol, and benzodiazepines. The Journal adds that a significant number of patients who are treated for an opioid overdose in an emergency department setting also test positive for benzodiazepine use in urinalysis.

Like Valium, opioid pain medications can depress certain central nervous system activity; however, opioids have a more powerful effect on respiration and heart rate than Valium. When taken alone, Valium is unlikely to cause severe respiratory depression or an excessively slow heart rate. But when taken with opioids, the opioid drugs can enhance the central nervous system depression of Valium, making it more likely that the user will experience one or more of the following reactions:

When an individual’s heart rate becomes so slow that blood and oxygen are no longer delivered to the brain, and respiration become so shallow that the body is no longer receiving oxygen, the user is at risk of death. While some fatal overdoses are accidental, others are intentional and planned carefully. The Centers for Disease Control and Prevention states that benzodiazepines like Valium were among the leading types of drugs used in suicide deaths between 2005 and 2007, and that 31 percent of suicides involved prescription drugs and alcohol.

The use of Valium with alcohol or other drugs puts the user at a higher risk of chemical dependency and addiction. Valium and other substances can have a symbiotic effect, heightening the user’s response to the drugs (a phenomenon known as “boosting”). Users who have experienced the combined effects of multiple substances may not be satisfied with using a single drug, especially when multiple drugs are readily available.

Statistics on substance abuse treatment in the US confirm that poly-drug abuse involving Valium is a common concern.

The Substance Abuse and Mental Health Services Administration points out that individuals who already have substance abuse disorder, such as opiate addiction or alcoholism, are more likely to abuse benzodiazepines like Valium than the general population, and that a large percentage of patients in substance abuse treatment programs abuse benzodiazepines along with other drugs.

Individuals suffering from alcohol addiction sometimes self-administer Valium to avoid the symptoms of alcohol withdrawal. Valium is prescribed in some medical detox programs to help prevent some of the more serious effects of alcohol withdrawal syndrome, such as seizures and agitation; however, it is dangerous and illegal to take diazepam without a doctor’s prescription. The only safe, effective way to withdraw from alcohol, benzodiazepines, opiates, and other drugs is through a professional detox program that provides intensive clinical monitoring.

Valium abuse and addiction are becoming more widespread in the US. Many users assume that because Valium is a prescription medication, it is not as dangerous as illicit drugs and can easily be combined with other substances. However, the fact is that Valium is never more dangerous than when it is mixed with other central nervous system depressants.

A comprehensive rehab program can help Valium users recover their health and avoid the hazardous side effects of abusing multiple substances.