What Is This Drug Used to Treat? 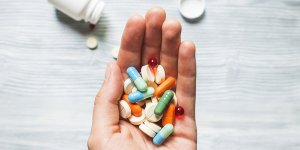 These drugs are safe when taken as prescribed. However, several of them can lead to addiction, dependence, and tolerance, and a few of them can cause overdose and even death if the person takes too high a dose or combines them with other drugs.

Suddenly stopping some of these medications after a period of consistent use can also lead to withdrawal symptoms. Talk to your doctor before you quit using them.

Find Rehab Treatment Near You

What Are Opioids For?

Opioids are medications prescribed to treat moderate to severe pain, coughing, and diarrhea. Some opioids are manufactured from opiate precursor substances derived directly from the opium poppy plant, while others are entirely lab-synthesized. Users typically experience euphoria, relaxation, and pain relief when taking these drugs.1

Opioid drugs work by attaching to opioid receptors located throughout the body, including in the brain and spinal cord. Once attached, these drugs activate the receptors and, through the ensuing cascade of neurochemical events, blunt the perception of pain signals reaching the central nervous system. Opioid use is also associated with a surge of dopamine, which can result in an intensely pleasurable feeling, especially when a large amount of the drugs is consumed.1

In addition to their pleasurable effects, opioids can cause short-term effects such as:1

Long-term effects of opioid use can include:2

Opioids can carry a high risk for overdose, especially if taken in larger amounts than prescribed. During an opioid overdose, a person may develop shallow breathing or stop breathing altogether. This can result in decreased oxygen in the brain, permanent brain damage, coma, or death.1

Physical dependence is another effect of repeated opioid use. A person who has developed opioid dependence will likely go into withdrawal when they stop using or take a lower dose. Dependence often develops alongside tolerance, which arises as a person begins to feel less of an effect from the drug over time.1

During opioid withdrawal, a person may experience muscle and bone pain, diarrhea, vomiting, cold flashes, uncontrollable leg movements, sleeping difficulties, and cravings. These symptoms can begin within hours of stopping the drug.1

Finally, heavy use of prescription opioids can lead to addiction, in which a person’s compulsive drug use causes health problems and an inability to take care of daily responsibilities at work, home, or school. Opioid abuse and addiction have become significant global public health issues, but awareness and treatment efforts have been stepped up, especially in recent years. A combination of behavioral therapies and medications can help people struggling with compulsive opioid use.1

What Are Benzos For?

Benzodiazepines, or benzos for short, are commonly used to treat anxiety disorders, including generalized anxiety, social anxiety, and panic disorder. In some cases, they are also used for certain types of muscle spasms, as anticonvulsants, and to manage alcohol withdrawal.3,4,5

Benzos differ in how fast they are absorbed into the bloodstream and act on the body, which can range from 6 to 24 hours or more. Their duration of action also varies. Short-acting benzos, such as alprazolam, lorazepam, and temazepam, are cleared from the body relatively quickly, while long-acting benzos, such as clonazepam, diazepam, and chlordiazepoxide exert their effects for longer durations.5,6

People may abuse benzos for their euphoric effects and, in seeking to enhance their subjective experiences, combine them with other drugs, including cocaine and alcohol. Long-term use of benzos can lead to tolerance, dependence, and addiction. Withdrawal symptoms—which usually occur in people who have taken benzos for more than a few months—include anxiety, insomnia, tremors, increased heart rate and blood pressure, and seizures. 5,6 Because of the risk for dependence, benzos are typically prescribed for short periods of time.3

Benzos do not often cause overdoses unless they are combined with other depressants such as alcohol or opioids—which can lead to severe respiratory depression and death.5,6

What Are Stimulants For?

Stimulants are drugs that improve attention and alertness and increase energy, blood pressure, heart rate, and breathing.3 Prescription stimulants are often used to treat children and adults with attention-deficit hyperactivity disorder (ADHD). In some cases, they may also be prescribed to treat depression, narcolepsy, obesity, and Parkinson’s disease.7

Different stimulant drugs work by causing an increased release and/or buildup of several neurotransmitters, including dopamine and norepinephrine, in the synapses of the brain. This leads to effects like increased focus, concentration, and wakefulness.7

Like opioids and benzodiazepines, stimulants can be addictive, especially when misused or taken without a prescription. Stimulant abuse can also lead to physical and psychological dependence. Users may take amphetamines in a “binge and crash” pattern that results in depression, anxiety, fatigue, and cravings when the binge ends.7

What Are Antidepressants For?

While it is unknown exactly how antidepressants work, it is believed that they increase levels of certain neurotransmitters in the brain, including serotonin and norepinephrine, which have effects on mood. Some antidepressants also have an impact on the transmission of pain signals in the brain, which can help alleviate chronic pain.8

There are several different categories of antidepressants on the market:

It typically takes 1 to 2 weeks—and even up to 6 weeks in some cases—for a person to experience the benefits of these drugs. Approximately 50% to 65% of people treated with antidepressants will experience an improvement in symptoms.9

Common antidepressant side effects include:3

Certain antidepressants may have additional side effects characteristic to their respective classes. SSRIs and SNRIs are associated with the least number of side effects compared to other types of antidepressants. Tricyclics are known to cause dry mouth, tremor, constipation, and increased heart rate. Older adults on TCA therapy may also experience confusion, faintness, and may be at increased risk for falls. MAOIs can lead to seriously high blood pressure if a person consumes foods with the ingredient tyramine. Tricyclics and MAOIs are prescribed less frequently than other antidepressants for these reasons.9

Antidepressants aren’t considered addictive, and they don’t lead to tolerance or physiological dependence in the same manner as drugs of abuse. However, some of them are associated with what is known as discontinuation syndrome, which is essentially withdrawal. Up to a third of people who stop taking SSRIs and SNRIs experience withdrawal symptoms such as:9

These symptoms can last from 2 weeks to 2 months.9

People who want to stop taking their antidepressants should speak to their doctor, who can set up a tapering scheduled to gradually reduce the dose over time.9

What Are Antipsychotics For? 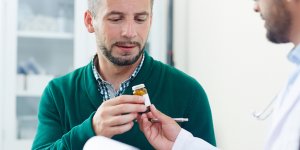 Antipsychotics are used to treat symptoms of psychosis, which can be present in schizophrenia, bipolar disorder, and severe depression. Psychosis involves a loss of contact with reality and may include distorted thinking, hallucinations, and delusional thoughts. Antipsychotics help alleviate these symptoms by altering brain chemistry, specifically dopamine levels, which reduces hallucinations and delusions.3,10

Antipsychotics may also be prescribed along with other medications to help treat delirium, dementia, ADHD, eating disorders, PTSD, OCD, and anxiety.3

Antipsychotics may relieve symptoms such as agitation and hallucinations within a few days of use. Other symptoms, such as delusions, may continue to last for a few weeks after starting the medications, and the full effects may not be felt for up to 6 weeks.3

Antipsychotic medications can cause side effects such as: 3,10

Tardive dyskinesia (TD) is a long-term effect of taking typical antipsychotics. It involves involuntary, uncontrollable movements, often most notably around the mouth, that can range from mild to severe. In some cases TD is permanent, but some people do recover once they stop taking antipsychotics.3

Some people stop taking the medications when they feel better, which can lead to a return of their symptoms. People should not discontinue antipsychotic medications without talking to their doctor first. Going off the medication must be done slowly, through a tapering process. Many people need to stay on the drugs for months or years.3

Antipsychotics are not considered addictive and do not lead to tolerance.10

What Are Anticonvulsants For?

Anticonvulsants are medications that are intended to treat epilepsy or seizure disorders. However, certain varieties are also effective at treating pain, anxiety, dementia, schizophrenia, and bipolar disorder. They are known to calm the nerves that transmit pain signals, which can help reduce pain and improve sleep.11,12

Carbamazepine (Tegretol), valproate (Depakote), lamotrigine (Lamictal), pregabalin (Lyrica), and gabapentin (Neurontin) are anticonvulsants that may be prescribed to treat these conditions.11,12

Common side effects of taking anticonvulsants may include:11

Less common side effects, such as blurry vision, swelling of the legs, headache, vomiting, and diarrhea may also occur.11

People may not experience the beneficial effects of these medications for several weeks. So it is important to keep taking them even if you don’t feel any relief from your symptoms. Most people are prescribed a gradually increasing dose to take over several weeks.11

Similar to antipsychotics, people taking anticonvulsants should be tapered off of them and not stop using them suddenly. Abruptly quitting them may lead to withdrawal effects.11

What Are the Top Diseases/Issues That Affect Americans and What Medications Are Used?

Though many Americans suffer from the conditions outlined above, other chronic diseases affect a large percentage of the population. Various medications have been developed to help people cope with these issues.

If you or someone you know is struggling with a mental or physical health problem, reach out for help today. Many conditions are treatable with the right medication, therapies, and lifestyle changes.

Contact a health provider or addiction professional who can find the right treatment program for you.