Cocaine and Pregnancy: Dangers of Using Cocaine While Pregnant

When a pregnant woman uses cocaine, it can prove very harmful to her and her unborn baby. Fetal exposure to cocaine is associated with several severe risks, including premature birth and cognitive problems that can persist through the child’s adolescence.1 However, receiving the appropriate treatment may help improve the health and quality of life of both a woman and her baby. If you or a loved one is pregnant and struggling with cocaine use, you don’t have to go through this alone.

While many factors (such as a person’s environment, their social support system, and whether they use other substances in conjunction with cocaine) play a role in the potential effects of drug use on a mother and her unborn baby, fetal exposure to cocaine is associated with serious health issues, including several types of developmental and behavioral deficits.1

Here, we’ll help you understand how cocaine may affect a pregnant woman and her unborn child, as well as how critical receiving the proper treatment is to the health and safety of the mother and her child. Pregnant women struggling with cocaine addiction have access to a considerable amount of professional treatments for their substance use disorder, and the right help may prevent or reduce many of the risks associated with cocaine use during pregnancy.

Cocaine is a Schedule II drug and a powerful stimulant with a high potential for abuse. Though pharmaceutical cocaine continues to see limited use as a local anesthetic and vasoconstrictor, the majority of cocaine use takes place illicitly. Stimulants like cocaine may be used to elicit a sense of exhilaration and boost a person’s self-esteem.2 Some people may use stimulants, including cocaine, in an attempt to boost mental and physical performance and suppress appetite.3

Illicit sources of cocaine are often encountered as a fine white powder. Purity is always a concern with street drugs, and cocaine is sometimes cut with other potentially harmful-to-ingest substances, such as talcum powder or even other stimulants such as amphetamine. A free base, crystalline rock form known as crack cocaine continues to be a problematic substance of abuse.3 People may use cocaine in its various forms by snorting, injecting, and/or smoking the drug.4

Effects of Cocaine on the Body

Commonly reported subjective effects of cocaine include increased alertness and energy and reduced fatigue. The subjective stimulant effects and reinforcing behavioral qualities of cocaine result from increased activity within several neurotransmitter systems, including dopamine, a brain signaling molecule commonly associated with pleasure levels in the brain and body movements.5 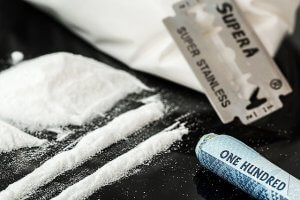 The human body normally releases dopamine in response to pleasurable experiences such as eating, exercising, and having sex. These pleasurable feelings gradually subside as the dopamine is reabsorbed into the body’s cells. Cocaine prevents this reabsorption, leaving more dopamine outside of the cells for longer periods of time, which contributes to the euphoric high associated with cocaine use.4

Whether someone uses cocaine for a short period or long period, they are at risk of developing adverse health issues across a range of the body’s vital systems. For example, cocaine use causes immediate changes to your cardiovascular system by increasing blood pressure, heart rate, and body temperature. This can increase the risk of cardiovascular emergencies such as stroke or heart attacks.4

Risks and Dangers of Using Cocaine While Pregnant

Using cocaine while pregnant can create problems for both a woman and her unborn child. Some of these problems can be devastating. It may not be easy to read about this topic as a pregnant woman struggling with cocaine use, or as someone who knows a pregnant woman struggling with cocaine addiction. However, it’s crucial to educate yourself on the dangers of using cocaine while pregnant so that you can make the best and most informed choices for yourself, your baby, or your loved one.

Cocaine’s negative effects on a fetus are largely due to the drug’s ability to easily cross the placenta and enter the unborn baby’s body, disrupting the central nervous system during crucial periods of fetal development and inhibiting healthy blood flow to the child’s brain.5

Some effects of drug use during pregnancy can persist for long after a woman’s baby is born. The extent of these negative consequences depends on the dosage, timing, and duration of a mother’s cocaine use, all of which influence how long the baby was exposed to the drug.5

The following are just some of the serious effects of using cocaine while a woman is pregnant. Remember: If someone seeks help for their cocaine abuse, many of these effects can be minimized or prevented depending on the extent of use.

Cocaine use during pregnancy significantly increases the risk of premature birth, meaning a baby is born too early (before 37 weeks).6 Babies born preterm may have a higher risk of serious health problems. After birth, they may experience issues with cognition as well as problems with their heart, eyes, and other organs. Later in life, they may have a higher risk of intellectual or developmental disabilities.7

Low birth weight (less than 5 lbs. 8 oz.) is another serious risk associated with the use of cocaine during pregnancy. Some babies with a low birth weight can be healthy, but others can suffer from health problems such as eating problems, chronic infections, and difficulty gaining weight—issues that may require medical intervention.8

Cocaine use can increase the risk that a woman miscarries her baby, meaning her baby dies before 20 weeks of pregnancy.6 One study reports that there is a 40% increased risk of miscarriage when a woman uses cocaine while pregnant.9  This usually depends on the amount of cocaine a woman uses. However, if a woman has a miscarriage due to cocaine, the use of other drugs, or natural causes, it’s still possible to have a healthy pregnancy later on.

Placental abruption is a very serious risk of using cocaine during pregnancy. Without immediate medical attention, this could lead to the death of a mother and her baby.

Typically, the placenta grows on the upper part of a woman’s uterus and remains in place until her baby is born. Placental absorption occurs when the placenta detaches from the uterus prematurely, reducing the amount of oxygen and nutrients available to the baby and causing heavy bleeding in the mother.6

Mild placental abruption may cause few symptoms, and monitoring in the hospital may be required until the bleeding stops. However, a moderate or severe abruption can lead to severe vaginal bleeding, growth problems in the baby, premature birth, and stillbirth. If the bleeding is uncontrollable, the woman may need a hysterectomy.6

Along with the aforementioned risks involved with cocaine use during pregnancy, additional risks and potential adverse effects may appear once the baby has been delivered and the mother chooses to breastfeed while using cocaine.

Keep in mind, there are myriad advantages of breastfeeding for the baby and the mother. A few of the more critical infant-related benefits include:10

Meanwhile, mothers who breastfeed may also experience advantages such as a reduction in breast and ovarian cancers, cardiovascular disease, and diabetes.10

That said, breastfed infants whose mothers use cocaine also face significant risks. While there are limited reports about cocaine in breast milk, the drug’s chemical properties suggest that it would pass into breast milk in consequential amounts. Thus, the cocaine would then be absorbed by the baby and broken down in the gut.10

Despite the limited research, infant ingestion of cocaine via breast milk may cause the following sporadic adverse effects:10

Babies are at further risk simply because  they don’t yet have the capacity to metabolize and clear drugs from their systems in the same way that adults do. As such, when babies are exposed to even small doses of cocaine, it can remain in their systems for an extended period and cause considerable harm.10

Additionally, cocaine has been detected in human milk in high concentrations, leading to infant intoxication, which has its own set of short- and long-term effects.11 What’s more, smoke associated with cocaine use can also be harmful to infants. As such, cocaine shouldn’t be smoked by mothers—or anyone—near infants.12

Given the importance of breastfeeding, it’s imperative that breastfeeding mothers who also use cocaine work with their healthcare and treatment providers to ensure the baby benefits from breastfeeding but is also shielded from cocaine exposure. There is no reason for mothers who previously struggled with cocaine use, but are no longer using the drug should avoid breastfeeding. However, for mothers with a substance use disorder who continue to use cocaine intermittently, experts recommend that they refrain from breastfeeding for roughly 24 hours after cocaine use.10 Ideally, women with substance use disorders who choose to breastfeed should be engaged in treatment both during and following pregnancy.11

Dangers of Cocaine Addiction on the Mother

Cocaine abuse can cause problems for a pregnant mother, such constricted maternal blood vessels, increased blood pressure, increased heart rate, and an increased risk of arrhythmia—all issues that can secondarily cause problems for the developing baby. For example, the constriction of blood flow to the fetus and high blood pressure in the mother can result in impaired oxygen delivery to the fetus and intracranial hemorrhage (bleeding) in the baby’s skull.13

There is always hope in some of life’s most painful and challenging situations, no matter how dire things may seem in the moment. A woman and her child don’t need to suffer the consequences of cocaine addiction. You or your loved one can receive professional help to stop using cocaine and begin a path to drug-free and fulfilling life.

American Addiction Centers offers specific addiction treatment for pregnant women. Programs such as residential (or inpatient) treatment or outpatient rehab offer special accommodations for pregnant women. These programs can provide you or your loved one with the guidance, monitoring, and support you need to stop using drugs and maintain sobriety.

By seeking professional help for cocaine abuse, a woman can take back control of her life and help ensure the health, safety, and wellbeing of her unborn baby.

Stacy Mosel, L.M.S.W.
Author
Stacy Mosel, L.M.S.W., is a substance abuse specialist, psychotherapist, and licensed social worker.
Read Our Editorial Policy
Related Topics
Related Tags
cocaine
pregnant
Are you covered for addiction treatment? Find your insurance.
Check My Insurance
Do you have insurance?
Don’t wait. Call us now.
Our admissions navigators are available to help 24/7 to discuss treatment.
Get addiction help now (24/7 helpline)We’re here for you every step of the way.