Interaction between Drugs and Cholesterol

Editorial Staff
The editorial staff of American Addiction Centers is made up of credentialed clinical reviewers with hands-on experience in or expert knowledge of addiction treatment.
Related Topics
Related Tags
co-occurring-disorders 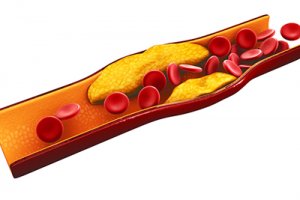 Most healthy people manufacture adequate amounts of cholesterol, a waxy substance that is found in the cells of the body and important in a number of bodily functions. Cholesterol aids in digestion, synthesizing fat-soluble vitamins, and the production of certain hormones and other substances. Cholesterol moves through the bloodstream in lipoproteins, which are packages of fatty material covered by protein.

In addition, it is important to recognize triglycerides, which are fatty substances that are manufactured from fatty foods people eat. They are necessary for normal cellular function at low levels, but at high levels, they present a potential health issue. Individuals with lipid disorders (e.g., high levels of triglycerides or high LDL levels) often do not feel ill, but over time, these substances accumulate and result in a number of deleterious health effects that appear to occur suddenly, such as a stroke or heart attack. This is why conditions like high blood pressure, diabetes, high cholesterol, etc., are often referred to as “silent killers,” as most people often appear asymptomatic until there is a major event.

A number of issues can interact to produce a situation where an individual has high levels of LDL or triglycerides in their system, often referred to as having “high cholesterol” levels. These include:

According to the World Heart Federation and other sources, smoking tobacco products is the second leading cause of cardiovascular disease in the world; the leading cause of cardiovascular disease is high blood pressure, which can be affected by tobacco use. The use of tobacco products, particularly cigarettes, aids in the constriction of arteries, veins, and capillaries, which leads to the buildup of plaque associated with high cholesterol as well as scarring in the veins, arteries, and capillaries. This makes the presence of LDLs in the system even more damaging and results in the potential to develop high blood pressure, clots, and cardiac issues.

In addition, cigarette use leads to a number of respiratory issues, which further damage the system as a result of reduced oxygen intake and make one more susceptible to the effects of cholesterol. Stopping smoking can significantly reduce the risk. The data indicates that individuals who have not smoked for five years have reduced their risk of heart attack by nearly 50 percent of what it was when they were smoking. Individuals who remain tobacco-free for 15 years are at about the same risk as nonsmokers to have a heart attack.

Numerous research studies have associated moderate to heavy alcohol use with increased levels of bad cholesterol. Moderate to heavy drinking is typically associated with higher levels of bad cholesterol (LDLs) and high blood pressure, whereas light to moderate use of alcohol (particularly the use of red wine) may be associated with an increase in HDL levels. Unfortunately, this research is often misinterpreted, and the definition of what actually constitutes light to moderate drinking is often a subjective one. Studies that have found the use of red wine can be associated with an increase in HDL levels most often associate this connection with drinking one glass of wine per day.

While the association with moderate to heavy alcohol use on a daily basis with high blood pressure and increased bad cholesterol counts is consistent across studies, the association between light alcohol use and an increase in HDL levels, even when the alcohol use is extremely light, is not a consistent finding. Most likely, other factors like heredity and lifestyle contribute to this finding.

These findings have led to organizations like the American Heart Association recommending that people do not use wine as a preventative measure against the development of heart disease, but instead use approaches that are observed across nearly all studies to limit the risk of developing cardiovascular issues, such as diet, exercise, regular medical checkups, etc.

The use and abuse of a number of central nervous system stimulants, such as amphetamines, cocaine, methamphetamine, etc., have long been associated with an increased risk for the development of high blood pressure and other cardiovascular issues. These substances result in thickening of the heart muscles and arteries as well as constriction of the arterial system that interacts with levels of LDLs to produce a number of potential health issues.

Opiate drugs constitute a large class of drugs that are primarily designed for the control of the subjective experience of pain and that have a high potential for abuse. The American Association of Addiction Medicine and the National Institute of Health have analyzed research studies on the association between the use of opiate drugs and cardiovascular issues. They found that individuals who use opiate medications for medicinal reasons and according to their prescribed uses (under the supervision of a physician) are at a minimal risk to develop cardiovascular issues.

However, individuals who abuse these substances are at an increased risk to develop cardiovascular issues that can be potentially serious. One side effect of abuse of opiate drugs is a lack of attention to personal hygiene and personal maintenance. This can result in very poor diet that can lead to increases in cholesterol levels and further the potential for cardiovascular issues.

The research remains mixed regarding whether smoking marijuana is a risk factor for the development of high cholesterol. Findings tend to suggest that the use of marijuana is compounded by other lifestyle factors that may affect cholesterol levels and cardiovascular issues, such as obesity, diet, the use of tobacco or other drugs, and a lack of exercise.

Whether the ingestion of the psychoactive products in marijuana, such as THC, alters cholesterol levels to any significant effect remains debated.

A person cannot directly alter their genetic makeup; however, they can reduce the risk factors that are associated with heredity by altering their lifestyle. This means engaging in a healthy lifestyle that is not associated with any type of drug misuse or abuse. Individuals using or abusing drugs or alcohol should become involved in substance use disorder treatment programs to address these issues.

Other common sense interventions to engage in include:

Editorial Staff
The editorial staff of American Addiction Centers is made up of credentialed clinical reviewers with hands-on experience in or expert knowledge of addiction treatment.
Related Topics
Related Tags
co-occurring-disorders
Don’t wait. Call us now.
Our admissions navigators are available to help 24/7 to discuss treatment.
Why call us?