Hydrocodone classifies as an opioid pain reliever, also known as a narcotic.

Although it’s derived from the poppy plant, it’s considered a semisynthetic since it’s not natural.

Hydrocodone is found in various brand name drugs like Hysingla ER and Zohydro ER, which are extended-release medications given for severe pain. As they are used for round-the-clock pain relief and as long-term pain management solutions, they are often prescribed to patients who require daily treatment for pain as well as those who don’t find adequate pain relief from other medications. In addition to its generic form, hydrocodone is also found in Vicodin and Lorcet, which may be given on an as-needed basis, often following surgery or an injury.

In the US, more than 1 million prescriptions are written for hydrocodone each year.

What Are the Side Effects of Hydrocodone? 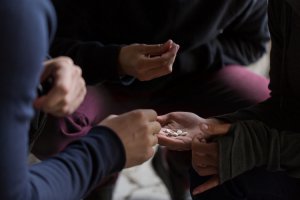 Hydrocodone use can cause various side effects, even with legitimate medical use. The most common side effects include nausea and vomiting. The drug may also cause constipation since opioids have the potential to reduce how fast it takes stool to move through the digestive system. In addition, opioids like hydrocodone increase nonpropulsive contractions in the middle of the small intestines and lessen the motions in the intestines that are responsible for moving food through them. The drug also has the potential to cause food to remain in the body’s organs for longer than usual as well as cause a reduction in digestive secretions and the urge to defecate.

People who take opioids may experience dry mouth and overall itchiness. It’s possible that the drug will cause swelling in the hands or feet. Muscle pain and back pain are possible. Hydrocodone may cause cold-like symptoms, such as sneezing, sore throat, or stuffy nose. Drowsiness or overall fatigue is possible, and sometimes the drowsiness is severe. Users may have difficulty sleeping.

Some side effects are less common. For instance, some people who take hydrocodone experience pain or burning when they urinate. Tremors, confusion, or severe drowsiness is possible. Sexual problems, including impotence and a loss of interest in sex, are possible. Women may experience infertility or miss a period. In some instances, hydrocodone may lower cortisol levels and lead to nausea, a loss of appetite, dizziness, and vomiting.

Hydrocodone has the potential to cause shallow or weak breathing, and it is not to be taken be taken by people who have asthma or another respiratory condition. The breathing issues may be serious or life-threatening. Respiratory distress may be greater at higher dosages and may cause death on the first use if given at too high a dose, as indicated by Purdue Pharma. Respiratory distress may be treated at the hospital with oxygen, intubation, or a ventilator.

If a person becomes comatose due to overdose, the person’s muscles can begin to break down. This particular condition is known as rhabdomyolysis, which stems from muscle tissue breaking down. As the muscles break down, they produce a chemical that enters the bloodstream and spreads to bodily organs, such as the kidneys and heart. It can cause the kidneys to fail, and if dialysis isn’t started before they completely fail, death may occur. When the chemical travels to the heart, it can cause extensive damage and even lead to heart attack.

Hydrocodone binds with the opioid receptors in the brain and works effectively at alleviating pain, and it’s also abused to achieve euphoria and a calm feeling. When taken at dosages that are higher than recommended or more frequently than prescribed, the chances of experiencing side effects increase. For instance, the chance of respiratory distress is greater. In some cases, use can lead to coma or death.

Overdose is a risk for those who take more than the recommended dose, who take it more frequently than recommended, or who alter the method of intake, such as those who crush and snort the pills. In the case of overdose, emergency medical personnel may administer naloxone, which can temporarily reverse the effects of overdose. The person may also receive activated charcoal. When hydrocodone is taken with other central nervous system depressants, the chances of overdose or an adverse reaction are increased.

People who abuse hydrocodone are at risk of various side effects, including short-term consequences like lightheadedness, drowsiness, sleepiness, and nausea and vomiting.

When a person “comes down” off the drug, the effects vary based on the amount taken, the person’s weight and height, and the person’s overall body chemistry. During this phase, the person may experience anxiety and increased sweating. It might become difficult for the person to concentrate or focus. Other side effects of coming off the drug include:

Opioids interfere with normal function of the lungs and put those who abuse opioids at a greater risk of pneumonia. Those who use or abuse opioids have the potential to develop a condition known as narcotic bowel syndrome, which results from a person’s bowel function slowing. Narcotic bowel syndrome causes symptoms like bloating, vomiting, constipation, abdominal distention, and nausea. Medications can assist with discomfort caused by the syndrome.

Since hydrocodone is metabolized by the liver, continued use can lead to liver damage. If it’s taken in combination with acetaminophen, as it often is due to combination medications like Norco and Lortab, the risk of liver damage and liver failure is even greater. Depending on the severity of the liver damage, the person may require a liver transplant.

While opioid pain relievers have the potential to cause kidney damage, the damage isn’t directly caused by the opioid; it stems from the acetaminophen in hydrocodone combination medications. The kidney damage can be extensive enough to require dialysis.

Side Effects of Snorting Hydrocodone

Those who abuse the drug intranasally can experience overdose more easily since they are receiving the drug more quickly and the effects are more intense. Crushed hydrocodone pills can damage the nasal cavity and even cause a person to lose their sense of smell. People who abuse drugs in this manner have frequent nosebleeds and congestion and possibly recurring sinus infections. Snorting drugs regularly will often cause hoarseness and may even cause a deviated septum.

Side Effects of Injecting Hydrocodone

When people crush hydrocodone pills, mix them with liquid, and inject the resulting substance, it increases the chance of an overdose. Injection drug use often results in an incredibly quick high, as the drug hits the bloodstream rapidly. There are a bevy of risks associated with this method of intake.

People who inject drugs may develop infections at the injection site or within surrounding tissue. Collapsed veins are a possibility due to repeated injections. In addition, injection drug use often leads to the contraction of blood-borne diseases, such as HIV or hepatitis, due to shared needles and other shared paraphernalia that is unclean.

A tolerance for hydrocodone occurs with repeated use. Over time, someone who uses hydrocodone will begin to require more of the drug to feel the same effects that were previously felt at lower doses. Once tolerance has developed, physical dependence quickly follows. At this point, addiction is likely.

Users should not attempt to stop taking hydrocodone suddenly as relapse during withdrawal is highly likely.

Find Hydrocodone Rehabs Near You