How Long Does Marijuana (Weed) Stay in Your System?

Like many drugs, the duration that marijuana remains in a person’s system varies depending on several factors. Frequency of use, level of tetrahydrocannabinol (THC) in the marijuana, metabolism, and hydration can all impact the results of a drug test.1

Typically, THC, the psychoactive component of marijuana, is detectable for up to 90 days in hair, anywhere between 1 day to a month or longer in urine (depending on how often the individual uses it), up to 24 hours in saliva, and up to 12 hours in blood.2 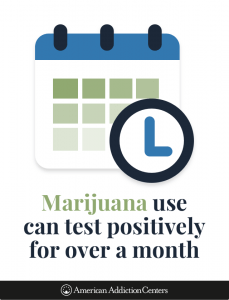 How Does Your Body Process THC?

THC is absorbed into various body tissues and organs (e.g., the brain, heart, and in fat) or metabolized by the liver into 11-hydroxy-THC and carboxy-THC (metabolites). About 65% of cannabis gets excreted through feces and 20% leaves the body through urine.1 The rest is stored in the body.

Over time, THC that is stored in body tissues is released back into the bloodstream, where it is eventually metabolized by the liver.1 In chronic marijuana users, THC builds up in fatty tissues faster than it can be eliminated, so THC can also show up on a drug test many days or even weeks after an individual uses it.4

How Long is Marijuana in Your System?

THC, a highly fat-soluble compound, has a very long half-life—the amount of time it takes the concentration of THC in the body to decrease by half. How long residual THC levels remain in the body depends on an individual’s marijuana use. For example, one study found that the half-life was 1.3 days for individuals who infrequently used marijuana. More frequent use showed a half-life of somewhere between 5 and 13 days.1

Additionally, detection of THC depends on the sample taken. Windows of detection vary.2

The mouth swab provides a quick, non-invasive drug test. A sponge or absorbent pad on the end of a stick rubs along the inside of the cheek or on the tongue. Research indicates that there is significant absorption of THC in the mouth, which increases the concentrations for several hours after use.5

THC retains the highest concentration for the longest period of time in urine; thus, urine samples are typically the preferred method of drug testing to detect marijuana use.1

Hair testing has a long detection window. Scalp hair can indicate marijuana use for three months.6 However, research indicates that a hair test is most reliable for daily or near-daily users but is not able to detect light cannabis consumption. In fact, one study found that 75% of individuals who self-reported to heavy cannabis use and 39% of individuals who self-reported to light marijuana use tested positive for THC via a hair sample.7

What Factors Impact How Long Weed Stays in Your System?

Besides the type of test, other factors that can affect how long marijuana registers on a drug screen include:1,6,8,9

Attempting to Beat a Drug Test 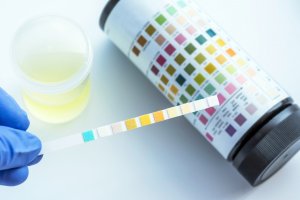 Many products have been marketed to help individuals “beat drug tests.” One such item is the detoxification kit for a marijuana drug test, which has become a popular item for those hoping to thwart a positive drug test for marijuana. A quick internet search reveals lots of options with most kits containing blends that include things like milk thistle, dandelion, ginseng, and more. While they may be safe to use (it’s always recommended that you consult a physician before taking any supplements) the little research available doesn’t substantiate the claims these products make.

In fact, one case study found an individual who developed psychotic symptoms after using a THC at-home detox kit.10 After review, the study’s authors found that many of the ingredients in the kit could cause liver dysfunction, even though the product did not specify the doses of the ingredients on the label. In addition, creatine, one of the ingredients in the kit, had been reported to cause acute psychosis in other case studies. Though the origin of the psychosis was never explained, the authors saw a strong link between the use of the kit and the onset of the man’s psychotic episode.10

Other attempted methods of evading a positive drug screening include masking the urine sample with a chemical, such as soap, ammonia, or bleach; or submitting a urine sample that isn’t theirs (with either synthetic urine or someone else’s).9 However, specimen validity tests can determine whether a urine sample has been diluted, adulterated, or substituted to get a negative result by detecting masking agents as well as compounds that are normally found in human urine, such as cortisol. It can also test for temperature, pH, color, gravity, smell, or dilution of the urine.9

Recent research indicates that approximately 30% of individuals who use marijuana may have some degree of marijuana use disorder.3 And people who begin using the drug before age 18 are 4 to 7 times more likely to develop an addiction as an adult.3

If you or a loved one struggles with marijuana use, American Addiction Centers (AAC) can help. Our facilities offer several levels of substance use treatment—from live-in inpatient rehab to outpatient programs that require onsite counseling and therapies a few times a week. Our treatment centers are fully credentialed and specialize in evidence-based care to treat all levels of drug and alcohol misuse.

Take our free, 5-minute marijuana addiction self-assessment below if you think you or someone you love might be struggling with a marijuana dependency. The evaluation consists of 11 yes or no questions that are intended to be used as an informational tool to assess the severity and probability of a marijuana use disorder. The test is free, confidential, and no personal information is needed to receive the result.

FAQs About Marijuana Use and Drug Tests

Dan Wagener, M.A.
Author
Dan Wagener is a Senior Web Content Editor at American Addiction Centers.
Read Our Editorial Policy
Related Topics
Related Tags
Marijuana
Are you covered for addiction treatment? Find your insurance.
Check My Insurance
Do you have insurance?
Are you wondering how long does weed stay in your system?
And are you or a loved one struggling with marijuana addiction? Take the first step and give us a call. Our team is available 24/7 to listen to your story.
Get addiction help now (24/7 helpline)We’re here for you every step of the way.