Sending a Child or Teen to a Rehab Center: What To Know

Authored by Editorial Staff
Last Updated: March 3, 2022
2 Sections
3 min read
Share
What you will learn:
Learning the signs and symptoms of a substance abuse in children.
How to stage an intervention.
Learn more about treatment options and aftercare.
Why call us?

One of the most difficult decisions a parent may ever have to make is the one to send a child to drug addiction rehabilitation. Underage people are more likely to resist treatment due to a lack of experience and foresight regarding how addiction will make transitioning into adulthood extremely difficult as well as how much drug abuse can impact their health. Teens also have a lower capacity for impulse control simply due to the fact that the advanced portions of their brains are not yet fully developed. It can therefore fall on parents to make the best decision for them.

Legally, people 17 years of age or younger can be put into residential drug rehab without their consent. This can seem like a very harsh decision, but there are circumstances where parents may have no other choice. When the teen’s life is at risk due to drug abuse, the resentment and anger that can result from forcing them into rehab is usually worth it. Keep in mind that a teen’s brain is still developing – up to age 25 – meaning that the damage done by drug and alcohol abuse will be much worse than it would be in an adult over the age of 25.

Is My Kid Addicted?

The first step to getting an addicted child help is to make sure the problem is indeed addiction. Symptoms of drug abuse and symptoms of mental illness often overlap, and forcing a child into addiction treatment when there is no addiction can cause serious damage to the parent-child relationship. This is complicated by the fact that teens who abuse substances typically hide this behavior from parents as they are very unlikely to approve.

Parents who suspect drug abuse and addiction should keep an eye out for the signs:

Some of these are symptoms of mental illness like depression, anxiety disorders, or bipolar disorder. Others are just signs of being a teenager. However, several of these symptoms together can point to a drug abuse problem. It can help to study the abuse symptoms of individual drugs or types of drugs, such as stimulants, depressants, and hallucinogens.

It’s also important to understand that drug abuse and drug addiction are not the same thing. Drug abuse is defined as any use of an illegal drug, any use of a prescription drug beyond what is recommended by a doctor, or excessive use of legal intoxicants like alcohol (though for teens, this is also illegal use). Drug abuse can lead to addiction, which is a general need for the drug in order to feel normal or feel like one can function. Stopping a teen from abusing drugs is difficult enough, but once an addiction forms, cravings and withdrawal make the prospect of quitting feel nearly impossible to many addicted individuals. At this point, treatment is needed, often after direct intervention by loved ones. 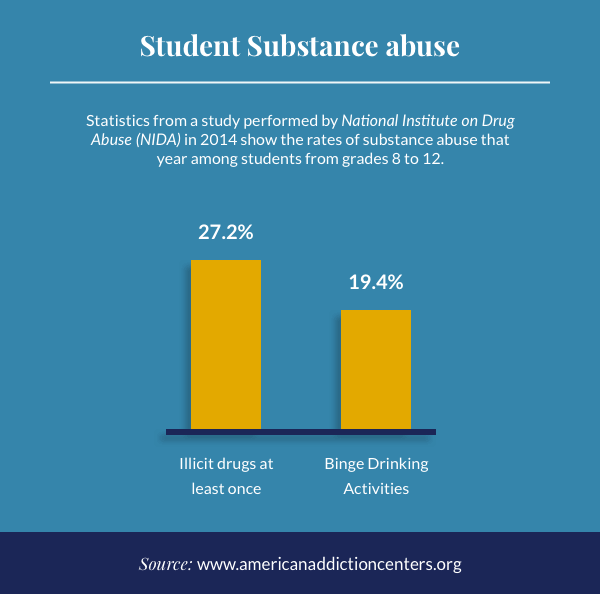 Though you can force an underage teen into rehab, it’s better for the outlook of the treatment and for the parent-child relationship to allow teens to make the choice on their own. There’s a fairly standard method of getting addicted loved ones into treatment if they’ve so far given no indication of seeking treatment themselves: an intervention.

Before staging an intervention, it’s essential to research rehab centers in the area first. The center will need to be notified of an incoming patient ahead of time so it can prepare and be ready to take in the person immediately following the intervention. This is done so the individual will not have time to back out. An intervention is a very emotional event. The person with the substance abuse problem will often get caught up in that emotion and agree to go to rehab based on this, but if that emotion has time to wear off, that individual might have a change of heart and refuse. Taking the addicted person to rehab immediately has shown to be a much more effective tactic than looking for a treatment center after the intervention.

There are over 14,500 addiction treatment centers in the US alone, each with its own philosophy and set of treatment programs. Some are specialized for teens and some are specialized for a certain type of drug. Some may follow a religious philosophy and others are secular. Parents need to research and balance things like distance from the home, specific philosophies, costs, types of treatment, etc. Residential rehab centers that keep clients in the facility for several weeks, 24 hours a day, can be expensive. However, many insurance programs cover addiction treatment, and some treatment centers will offer financing for those who need it. It’s best to speak with center representatives, your insurance company, and get advice from medical professionals. Selecting the right treatment center is essential.

The intervention itself can be very intense. It’s generally a gathering of the addicted person’s loved ones wherein they speak their concerns in a nonjudgmental fashion and urge the individual to get help. The reaction of the addicted person can vary widely. People may be accepting, they may become very emotional, deny having a problem, or become angry and defensive.

This person can help parents prepare their statements, and the interventionist will mediate the event to make sure it stays on track and to stop any enabling behaviors that may occur.