Is Restless Legs Syndrome a Cause for Substance Abuse? 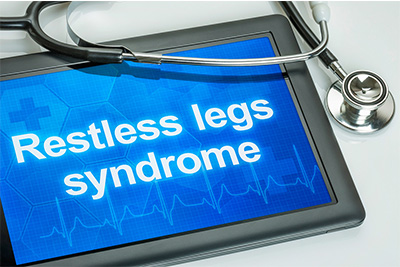 Restless legs syndrome, also referred to as restless legs syndrome/Willis-Ekbom disease (RLS/WED), is a condition that is associated with an uncontrollable urge for a person to move their legs. The urge most often happens during the evening or nighttime and when the person is either lying or sitting down. There is an uncomfortable sensation in the individual’s legs that is alleviated somewhat by using their legs.

The symptoms of RLS/WED include the following:

There are two types of RLS/WED.

There are numerous conditions that can trigger secondary restless legs syndrome, including nutritional deficiencies (e.g., iron deficiencies), renal (kidney) problems, diabetes, Parkinson’s disease, arthritis (most often, rheumatoid arthritis), and even pregnancy, as about 20 percent of women in the last trimester of pregnancy experience RLS-type symptoms.

Neuropathy, the condition that occurs when nerves are damaged and results in pain and issues with movement, can also be associated with the development of the disorder. Evidence suggests that the neurotransmitter dopamine may play a role in the development of the disorder, and there is some evidence that in some individuals the use of antidepressant medications may trigger RLS/WED type symptoms.

Other suspected risk factors for the development of restless legs syndrome/Willis-Ekbom disease include:

The assessment of RLS/WED is made solely on the basis of a physical examination of the person. There are no laboratory tests or imaging tests that can definitively diagnose the disorder, and clinicians rely heavily on the reports of the patient in order to determine if they have the disorder.

Numerous treatments for the disorder are available.

The Connection between Restless Leg Syndrome and Substance Abuse 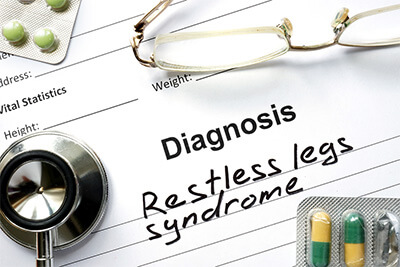 The notion that a particular illness or disorder causes substance abuse is not often accepted by mental health clinicians and researchers even if there is a strong association between a particular disorder and substance abuse. For example, there is a strong association between depression and substance abuse but clinicians do not emphatically state that depression causes one to abuse substances. The reason for this is that the type of research that would need to be performed in order to establish a definite causal type relationship is either unethical or impractical to do in people; it would require what is known as a true experiment. Instead, researchers and clinicians look at specific types of risk factors to determine potential conditions that can increase the probability that someone may develop a substance use disorder.

A risk factor is a condition or situation that is associated with an increased probability (increased risk) of developing a specific type of disorder or a disease. Thus, even though many individuals who have co-occurring disorders like RLS/WED and a substance use disorder may believe that the RLS caused their substance abuse issues, there are so many other variables involved in the development of a substance use disorder that it is virtually impossible to determine if a specific condition caused the person to develop issues with substance abuse.

Risk factors are additive, such that the more risk factors a person displays, the higher the probability that the person may develop the disease or disorder in question. Insomnia as a result of RLS/WED may be a salient risk factor for co-occurring substance abuse as lack of sleep with contribute to increased stress, fatigue, and the need to find a way to relax at night. Certain substances such as alcohol or benzodiazepines may fit this need.

Moreover, there is research to suggest that individuals who are experiencing sleep disorders associated with their RLS/WED may be more prone to substance abuse issues, particularly alcohol abuse, than individuals who do not have disorders of sleep. In this case, one would suspect that individuals begin to consume large amounts of alcohol in an effort to self-medicate themselves in order to sleep, and it could be determined that RLS/WED is a risk factor for the development of an alcohol use disorder when a person is experiencing significant issues with sleep; however, researchers do not go so far as to establish the cause-and-effect relationship in these cases.

One of the more likely explanations of observed relationships between many individuals with substance use disorders and restless legs syndrome is that the development of the symptoms of this disorder is often associated with individuals who are undergoing a withdrawal syndrome from alcohol or other drugs (e.g., opiate drugs). Irritability, restlessness, and even the significant problems with movement that are associated with RLS/WED have very often been observed in individuals undergoing withdrawal from alcohol and other drugs, and this association appears to be very salient. Thus, one of the more likely explanations is that the symptoms of RLS are a result of the withdrawal syndrome and may resolve significantly during recovery and abstinence.

Thus, it is generally observed that being diagnosed with restless legs syndrome is not commonly associated with the development of other serious issues. However, issues with insomnia and daytime drowsiness as a result of RLS/WED and/or being placed on specific types of medications may increase the risk that someone with this disorder may also develop a substance use disorder.

Editorial Staff
Related Topics
Related Tags
co-occurring-disorders
Don’t wait. Call us now.
Our admissions navigators are available to help 24/7 to discuss treatment.
Why call us?
Get addiction help now (24/7 helpline)We’re here for you every step of the way.